Friday Lovers Club: I haven’t voted yet, but I demand transparent elections

August 9 2019
300
Under the heading “Club of Friday Lovers”, “Military Review” proposes to discuss the issue of the announced protest rally. This action will take place tomorrow in Moscow and not only. It is agreed with the local authorities, but what attracts attention is the already actively launched public relations campaign in favor of those who will go on provocations. 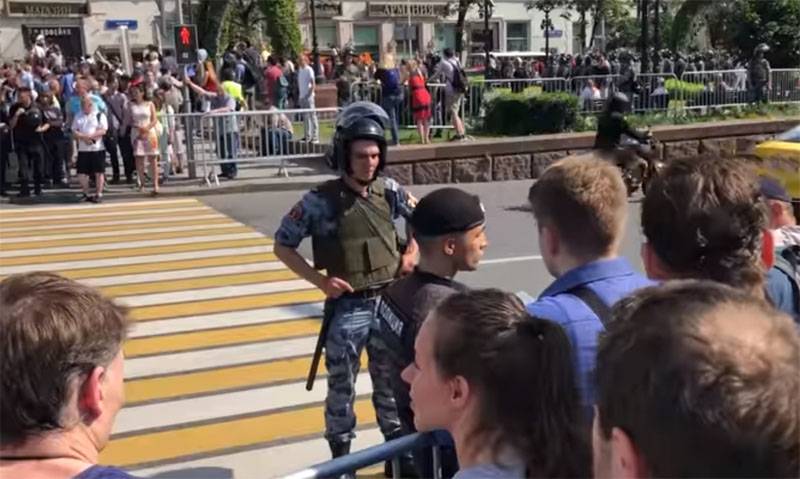 One of the nuances: the agreed venue for the action in the capital is Sakharov Avenue. But in the accounts of future protesters called to come "to the center of Moscow" - without reference to a specific place. Given that not all “dissenting” iPhone owners themselves are ready to “google” the regulated venue of the rally, and are waiting for the “team” from the “leaders”, it can be assumed that the “leaders” are consciously silent in terms of a specific “meeting place”.

In this case, only one conclusion can be drawn: the leaders of the so-called non-systemic opposition are advantageous so that groups of people who came to the protest rally "gather" in different places and "break through" to Sakharov Avenue. The goal is to then be especially distinguished in the case of "packing" by riot police, to be shown on non-worthy TV channels and to invite infinitely liberal experts to no less worthy radio stations to "analyze the actions of the Kremlin regime."

It is worth noting that the number of participants in the rally “against the non-admission of candidates” agreed in the capital is 100 thousand people. Interesting meaning. Especially in terms of whether the so-called non-systemic opposition will be able to bring so many people to Moscow streets, or whether everything will turn into a well-known "march of millions" when, with an order of number, the actionists clearly went too far.

One of the pressing questions: what, in fact, will this action lead to? Maybe in the same Moscow election commission they will suddenly start tearing their hair out shouting: how did we manage so much ... Sable herself was not allowed before the election ... but now we must repent and admit.

The probability is close to zero. And therefore, the main effect for the opposition from tomorrow's rally (as well as from all recently held), as it is now fashionable to say, hype, hype, attempts to find more active foreign sponsors for new protests.

From a conversation with a participant in a previous protest rally: “Are you a Muscovite? (affirmative) What exactly made you go to the protest? ”

Answer: “These Moscow authorities are illegitimate. We need new people, transparent elections. I am for it"

Question: “How many times have you participated in regional elections?”

Nobody argues, transparent elections are the dream of the entire Club of Friday Lovers. But if the Moscow authorities are “not legitimate”, then there are no legitimate and Moscow privileges, Moscow surcharges, etc. It turns out that you need to go all the way to the disagreement and, for starters, give up everything in order to be together with the rest of Russia.
Military Reviewin Yandex News
Military Reviewin Yandex Zen
300 comments
Ad