Kolomoisky: If there weren’t Russia, we would have finished everything peacefully in two weeks

August 6 2019
75
Another interview was given by the former head of the Dnipropetrovsk regional state administration of Ukraine, the oligarch who is suspected of financing the presidential campaign of Vladimir Zelensky, Igor Kolomoisky. The interviewers of Kolomoisky were RBC journalists. 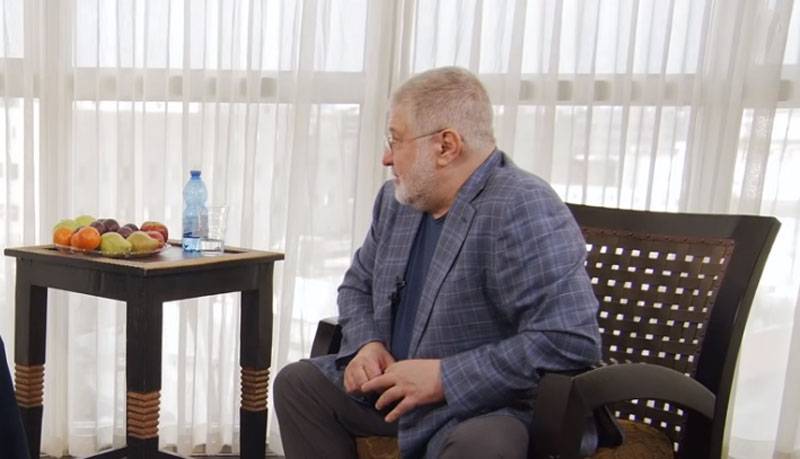 One of the topics touched upon during the conversation was the topic of Kolomoisky’s perception of the personality of Russian President Vladimir Putin.
Correspondents reminded the Ukrainian oligarch that at one time Putin (quote) "spoke unpleasantly about him." Kolomoisky stated that it was a “response”. And then the ex-head of the Dnipropetrovsk region actually made it clear that at one time he spoke negatively about Putin only because in his (Kolomoisky) circle there were people who had “committed the revolution”.

There was an audience, people who made a revolution - and then an uncle arrived from Geneva, he was fine, and he decided to become governor. They had to be put on their side, to show that we have an external enemy. History around a verbal conflict with Putin made them understand that I also burned bridges and we are in the same boat.
Thus, Kolomoisky cautiously “casts a bait” on the subject of a kind of revision of the Kremlin’s attitude in his direction: they say he said it because there were “people from the Maidan” around - “you had to say that.”

Next, we talked about the conflict in the Donbass. Kolomoisky once again called the conflict civilian, which contradicts the official Ukrainian interpretation. At the same time, the oligarch declared the following:

But (...) he grew into a hot form only thanks to the Russian Federation. She is one of the main sponsors and source of this civil conflict. If there had been no Russia and she had gone home, then we would have finished all these questions peacefully to universal satisfaction in a maximum of two weeks.
According to Kolomoisky, the Minsk Agreement is the only document worth moving on. The oligarch noted that so far these agreements have not been implemented, as they contain a clause on changing the constitution of Ukraine.

In addition, the topic of gas supplies was raised in an interview. In a very harsh language, the Ukrainian oligarch said that Russian gas "is not needed by Ukraine now and was not needed before." According to Kolomoisky, Russian gas turned into a fetish for individuals (he called Firtash, Levochkin, Boyko and Medvedchuk), "to rob Ukraine, and sometimes Russia."
Military Reviewin Yandex News
Military Reviewin Yandex Zen
75 comments
Ad