April 21 2019
467
The abnormal situation calls into question the first launch of the American SpaceX Spacecraft Crew Dragon. His first test flight with the crew was to take place at the end of this year. 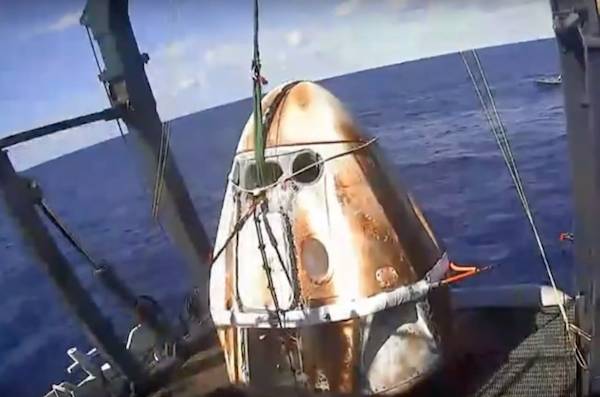 NASA and the private space corporation SpaceX, owned by Ilon Mask, reported an “anomaly” that arose during the static fire tests of the emergency engines of the Crew Dragon, which should replace the Russian Soyuz in sending US astronauts into orbit. Tests replacement "Union" were failed.

What happened and how great are the consequences?

Today, on April 21, Space conducted a series of verification tests for Crew Dragon's emergency engines in the 1 landing zone at Cape Canaveral, Florida. Initially, everything was in order, but the last check led to the identification of anomalies on the test bench
quotes a statement from a company representative company representative SpaceNews resource. Previously, this problem calls into question the conduct of a Crew Dragon test flight with the crew at the end of this year.

What exactly is the "anomaly", the press service did not report.

It is imperative that our systems meet stringent safety standards, and the detection of such problems before the flight is the main reason for which we are testing. Our teams investigate and work closely with our partners from NASA.
A SpaceX representative added.

Eyewitnesses on the beaches near Cape Canaveral reported that they saw at noon puffs of dark smoke near the BBC facility. 45-e space wing of the US Air Force, operating the base itself, confirmed that during the test an incident occurred, in which no one was injured.

SpaceX does not disclose which Crew Dragon vehicle was used for this test. Sources, however, say that, most likely, it was a spaceship that completed the successful mission of the “Demo 1” in March. Crew Dragon then managed to successfully dock with the International Space Station. At the end of the five-day mission, he splashed down in the Atlantic Ocean off the coast of Florida. Now, apparently, the ship is lost or received severe damage.

What exactly is broken?

Previously, a problem arose during testing of SuperDraco engines. These installations, in the amount of eight pieces, should be used as part of the Crew Dragon rescue system. The SuperDraco combustion chamber is formed by Inconel 3D printing from a high-strength alloy. 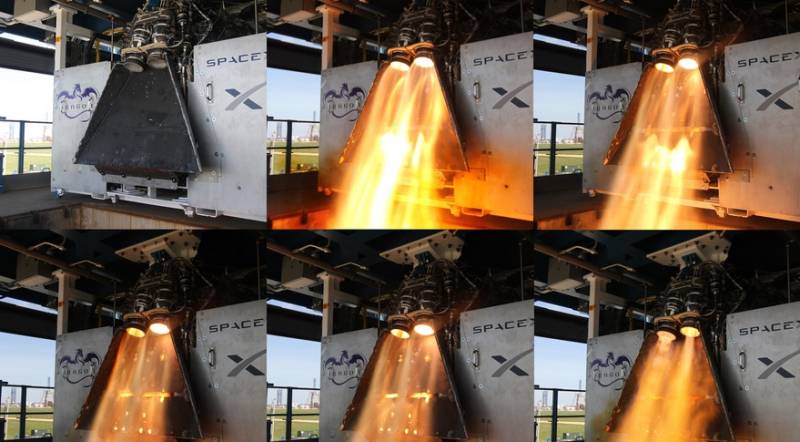 Bench tests of engines SuperDraco, not yet installed on Crew Dragon

SuperDraco is based on a self-combustible mixture of monomethylhydrazine (fuel) and diazot tetraoxide (oxidizer). The design of the power plant and the fuel used in it make it possible to achieve a high degree of reliability. Each SuperDraco engine is capable of generating thrust near 73 kN with a specific impulse 235. To increase the reliability of the Crew Dragon, their power will be reduced to 68 kN.

SpaceX planned to re-use the spacecraft during an in-flight failure test, when the spacecraft launches SuperDraco engines during peak aerodynamic pressure after launch, removing it from the Falcon 9 accelerator. It was expected that the tests will be held in the summer.

Any delay in testing the system redefines the mission of Demo-2, whose flight with NASA astronauts Bob Benken and Doug Hurley on board was scheduled to take place in July, but in the end was postponed to the autumn of 2019. With the current failure to test, the licensing period for permanent flights to the ISS will be again postponed.

Crew Dragon is considered by the US National Aerospace Agency as the main replacement for the Russian Soyuz spacecraft in the missions of American astronaut delivery to the International Space Station.
Ctrl Enter
Noticed oshЫbku Highlight text and press. Ctrl + Enter
We are
SpaceX has launched a reusable ship Crew Dragon to the ISSThe ship launched to the ISS has failed engines
467 comments
Information
Dear reader, to leave comments on the publication, you must to register.