Shooting reconnaissance boat "Marine Lizard". A new word in the control of controversial archipelagoes and littorals

April 19 2019
11
It has not been a secret for a long time that the increasing degree of military-political and operational-strategic tensions in the Indo-Asian-Pacific region every year, caused by the Pentagon’s attempts to counter the combat potential of the Chinese Navy and Air Force within the first and second "island chains" The Pacific Ocean (stretching all the way to the islands of Guam and Ogasawara), and also taking over the initiative in controlling sea trade routes in the South China Sea, is a powerful driver for intensifying the development of leading Chinese scientists. o-production associations and companies of the concepts of advanced surface and aerial unmanned attack and reconnaissance platforms. 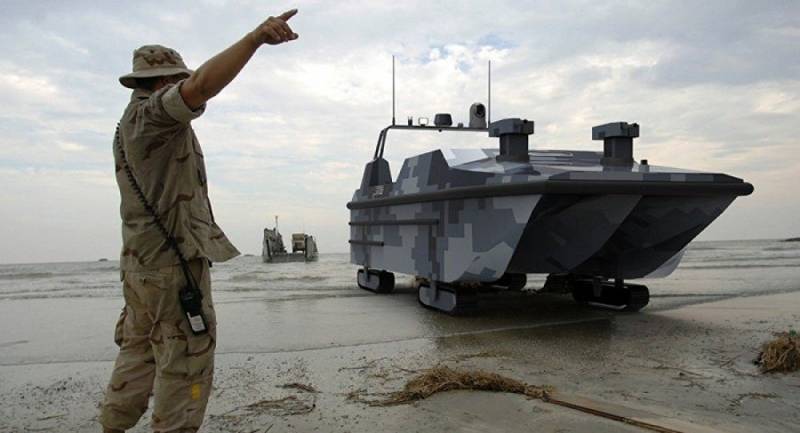 And if during the 2019 international exhibition of armaments and military equipment IDEX-2019 held in Abu Dhabi in February, the Chinese exposition only introduced visitors to the layout-demonstrator of the promising multi-purpose unmanned aerial reconnaissance boat JARI-USV from “ China Shipbuilding and Offshore International Company ”(the optional package includes the installation of a multifunctional radar with AFAR, sonar complex, short-range air defense systems, etc.), then this time we will talk about successfully passing the first not running trials of a prototype of the Marine Lizard strike / reconnaissance boat.

As the news The Global Times portal, the brainchild of Wuchang Shipbuilding Group (with headquarters and facilities in Hubei Province), is considered by the Chinese Navy command as the "primary asset" for monitoring the operational and tactical situation "on remote islands." Obviously, in our case we are talking about the disputed island archipelago of Spratly and the Paracel Islands, whose ownership is disputed by Vietnam, China, Taiwan, Malaysia, the Philippines and Brunei, as well as the Diaoyudao (Senkaku) archipelago. But what are the qualities for the implementation of the above goals does the unmanned boat “Marine Lizard” have?

Firstly, this is an impressive amount of the fuel system of the boat, which, given the economical power plant, provides a cruising range of 1200 km (648 miles). As a result, at a maximum speed of 93 km / h and dislocation at the Yulin Yubin (Hainan Island), the Marine Lizard will be able to reach the borders of the Paracel Islands in just 3,8 hours, the Spratly archipelago in 12 hours.

Secondly, it is the hull of the drone boat designed according to the “trimaran” scheme (with an integrated layout). The main technological advantages of this scheme are: low hydrodynamic resistance of three narrow bodies; increased transverse stability (in comparison with single-hull ships), as well as high resistance to the damaging effects of waves (achieved by relatively small separation of the side hulls, as well as continuous longitudinal coupling of the side hulls with the central hull by means of transverse power elements). These features allow the Marine Lizard boats to carry out reconnaissance and attack operations in the most difficult meteorological and hydrological conditions.

Thirdly, it is widespread use of composite materials and radio-absorbing coatings in the hull structure, as well as imparting a low-profile superstructure with a complex multi-faceted shape with numerous inclined edges and edges, thanks to which the effective reflective surface (EOC) of a trimaran boat is reduced to the performance of a compact boat of the Glaston type GT-180 ”(or even smaller numbers). As a result, the detection and sustained tracking of the Marine Lizard trimarans by means of the AN / SPY-1D shipborne multifunction radars of the AN / SPY-20D family operating in the decimeter S-band (included in the radar architecture of the destroyers Arley Burke) will be questionable even if will come out from behind the “screen” of the radio horizon and will be at a distance of 6 km from “Arley Burke”. And this is not surprising, since the S-band waves perfectly reflect off the agitated sea surface, interfering with the receiving-transmitting path of the radiating radar. AFAR-radars of the centimeter X-band APAR (installed on frigates of the Saxony, De Zeven Provenciön and Iver Hüitfeld classes), as well as the promising American naval radar AN / SPY-XNUMX AMDR, can demonstrate greater effectiveness in these conditions. But, as you know, the latter is only at the stage of full-scale tests in the Hawaiian Islands, which means that before the start of work on re-equipping Burk Flight III with radar data, it will take more than one year.

And finally, fourth, we are talking about the excellent amphibious abilities of trimarans-boats of the “Marine Lizard” class, achieved by installing four air-tight tracked units with individual electric motors on the lower forming side hulls. This option will provide an opportunity not only to carry out fire support of friendly units during assault and reconnaissance operations in the intertidal zone, but also to carry out an assault landing on those sections of the coast that will be scanned in advance by friendly optical-electronic and radar reconnaissance means for the absence of anti-tank calculations and enemy artillery.