April 14 2019
59
Marshal Khalifa Haftar paid a visit to Egypt. The rebellious commander held a meeting with Egyptian President Abdel Fattah al-Sisi at the height of the offensive against Tripoli, led by his forces. 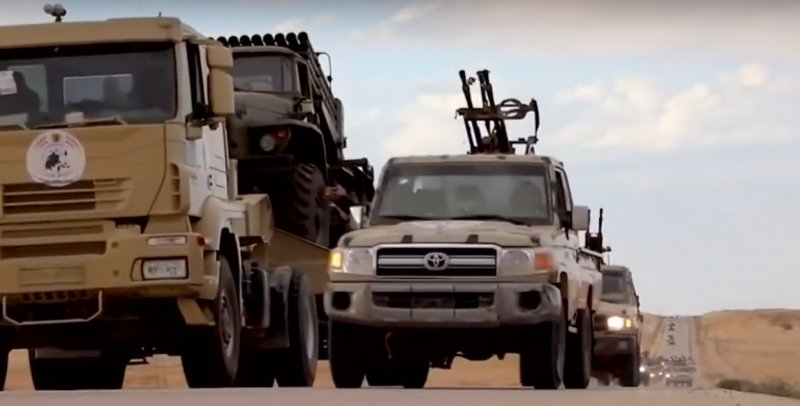 Khalifa Haftar, commander-in-chief of the Libyan National Army (LNA), which controls the eastern part of the country, and an opponent of the Government of National Unity, officially recognized by the UN leadership of Libya, visited Cairo. In the capital of Egypt, he held talks with President Abdel Fattah al-Sisi and the head of the Egyptian General Intelligence Directorate Abbas Kamel.

Reuters, which reported on the meeting, does not provide details of the conversation, saying only that during the communication of the parties, the situation in Libya was discussed. It is worth noting that the visit took place at the height of the LNA offensive against the Libyan capital, Tripoli.

Sisi is an ardent supporter of Haftar, who controls a number of areas in eastern Libya.

Khalifa Haftar delivered the first blow to the 4 government troops on April, promising to enter the city limits in 48 hours. In addition to supporting Egypt, the marshal secured financial support for Saudi Arabia. Russia also has warm relations with the military leader: the latter visited Moscow many times, and also in January 2017 paid a visit to the aircraft-carrying cruiser Admiral Kuznetsov, which entered Libyan territorial waters.

We must get rid of the so-called militias and terrorist groups.

- said on Saturday, April 14, the head of the House of Representatives of Libya and Haftar’s ally, Aguila Salah, hinting at the forces associated with the Tripoli government.

Tripoli is currently controlled by the Government of National Unity, chaired by Faiz Saraj. The Russian Federation, despite its good relations with the marshal, is in no hurry to give him direct support.

Forces loyal to the Tripolitan government have so far held back the eastern offensive. Fierce battles are fought around an abandoned airport about 11 km from the city center.

Last week, the European Union called on the Libyan National Army to stop its attacks. The UN Security Council advocates a peaceful settlement of the conflict.

For its part, the Tripoli government will agree to a cease-fire only if the LNA troops return to the east, government spokesman Mohanad Yunus told reporters.

Haftar's offensive hit the UN's reputation strongly, which 14 of April planned to hold a national conference to prepare Libya for the elections.

Since the beginning of the escalation of the conflict, according to a report published by the World Health Organization (WHO), 121 people have died. Another 561 injured varying degrees of severity.

According to the UN, 75 people died in recent days, of whom 17 civilians were killed, and another 323 was injured. About 13 000 people were forced to leave their homes.

Along with humanitarian costs, the conflict threatens to disrupt oil supplies, accelerate migration to Europe, thwart the UN peace plan and create chaos that armed extremists can take advantage of. On the other hand, the situation in Libya has long been turned into a humanitarian catastrophe, which the government of Saraj is not in a hurry to overcome. Or simply not particularly willing.