19 2012 June
56
We Russians are unhappy that we are not allowed into the European Union without visas. The argument of the Europeans on this score is as follows: they say, along with the guests, our democratic and full of freedom countries will start to leak, or even Moscow, Ural and Tambov gangsters, fraudsters, bombs and defendants, as well as Putin's spies will rush in with a roaring tide. But it is not necessary to grieve: soon there will be no reason for the EU to leave the “iron curtain” especially before the Russians. The fact is that the countries of the European Union are going to introduce, as in the good old days, when they had never heard of European crises, the border control inside Schengen. 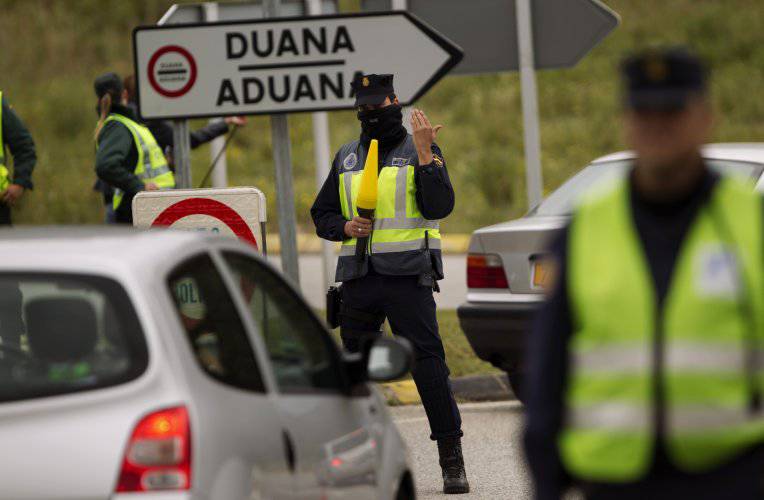 Yes, antiglobalists might not organize demonstrations and protests. From the fact that many political scientists, economists and futurologists in the last decade of the 20th century have been praised as “processes of integration and globalization”, in the near future, it seems that little will remain.

7 June the interior ministers of twenty-seven EU countries at a meeting in Luxembourg unanimously advocated an agreement that would allow temporary reinstatement of control at the internal borders of the member countries of the Union in the event of an uncontrolled influx of migrants from third countries.

A single decision of the ministers of all the participating countries suggests that the very idea of ​​a united Europe already does not cause anyone any enthusiasm, much less delight. Everyone now only think about the protracted crisis, and also about how this very crisis would not intensify and prolong.

The decision adopted on June 7 provides for the possibility of introducing national border control for up to six months. If necessary, the action of the border regime can be extended for another 6 months. This measure is considered "emergency".

The proposal to introduce the border control came from France and Germany. The motive for such an emergency decision was illegal migration.

Back in March, French President Sarkozy called for excluding from the Schengen zone those countries that cannot control the influx of migrants. France made a request to Brussels, demanding to clarify the conditions for the temporary restoration of border control provided for by the Schengen agreement in some exceptional circumstances. The French president was supported by the head of the German Interior Ministry, Hans-Peter Friedrich. is he сказал: “Sarkozy recently said that European countries should make joint efforts in order to effectively resist the phenomenon of illegal immigration in Europe in the long run. He's right. We should develop a common program of action against illegal immigration, similar to how we are fighting cross-border crimes. ” Hans-Peter Friedrich also described the geography of migration: “Greece is experiencing problems in protecting its border with Turkey ... Refugees from the north of Africa are transported by sea to Europe and go to Italy via Italy. That is why France, Germany and Austria recently came up with proposals to strengthen border controls in order to put an end to this type of internal migration. ”

The reason for the migration, which the head of the German Interior Ministry cautiously called "internal", was primarily the "Arab Spring". Tunisia, Egypt, Libya ... Migrants penetrate into Europe through Greece, which is not able to control their influx, but even brought its own economy to a critical state, despite financial support from the EU. Greece, in which, in essence, anarchy reigns, and new elections only confirmed contradictions among political forces, at one time it was anxious to build a wall on the Turkish border - like the Berlin one, in order to stop the growing flow of migrants.

Other well-known migrant routes to Europe are the Spanish Canary Islands, located near the northwestern coast of Africa, and the Italian island of Lampedusa in the Mediterranean.

Interestingly, all these countries - Greece, Italy, Spain - unable to cope with crowds of “internal” migrants, at the same time represent the most “frail” states in the European Union: with crisis economies, with huge crowds of protesters on the streets, with obvious distrust of the government . As for Greece, this country is likely to leave the eurozone in the near future and return to its former national currency - the drachma.

Having infiltrated into Italy, Spain, Greece, thousands and thousands of refugees, using all the facilities of visa-free travel, successfully reach those countries where the economy is in relatively good health - Germany and France.

In order for the decision to restore border controls for a particular EU country to take effect, that country will only have to notify its state neighbors. The French at the border can say to the Italians: “What is the purpose of your visit to France?” Well, if the Italian responds in a Sicilian dialect, then suddenly something will come down in Arabic ...

For the introduction of border control is probably enough, the slightest reason. The emergence of a lively group of migrants on the French border can provoke the closure of the border and the introduction of control for six months. Then - for another six months. Then the crisis will finish off Greece, then Italy and Spain, and the borders of the eurozone will narrow. Nobody speaks about the termination of the European Union as such, but the number of participants in the eurozone is likely to decrease. Alain Greenspan, former head of the US Federal Reserve, recently "said goodbye" to the euro project, calling it "Failure"and other political scientists seriously believe that the new Europe can start in the form of a fiscal union headed by non-crisis Germany. The world is changing right before our eyes, and история written in summaries News.

British political scientist Steve McCormick says: “If France remains outside the framework of the budget agreement, Germany will become the only leader of the Old Continent. The model proposed by Angela Merkel is nothing more than a leap toward the federal state. In order to control a new and more cohesive union, neither the European Commission nor the single parliament will be needed. The role of Brussels, which for half a century served as a compromise platform between Paris and Berlin, will come to naught. Enough will of the will of the largest lender in the eurozone - Germany, and disobedient countries will simply be indicated on the door. In the near future, Berlin may become synonymous with a united Europe. ”

Such opinions are based on the words of Angela Merkel, the German chancellor. The other day, giving an interview to ARD TV, she said: “We need not only a monetary union, but also a so-called fiscal union with a common fiscal policy. But most of all we need a political union. This means that we should gradually transfer the powers to Europe and give it more and more supervisory functions. ”

The role of the “capital” of the new European Union is already predicted by analysts today to Berlin. Few would be surprised if Angela Merkel becomes its president.

However, let's not rush things. The eurozone has not yet completely shaken, and Greece was not excluded from it. The new agreement 27 European Ministers of the Interior is also not yet entered into force. It must endorse evininstituty. And not the fact that they will easily approve.

European Commissioner for Home Affairs Cecilia Malmström is already said: “The decision to restore border control inside Schengen will be made at the European level on the basis of the proposal of the European Commission, which must be approved by a qualified majority of EU countries.” She expressed disappointment “Absence of European ambitions” among the participants of the meeting held on June 7 in Luxembourg.

The latest hot news on border controls is discussion by EU officials measures to prevent mass withdrawal of cash by citizens at ATMs - in the event that Greece’s supposed withdrawal from the eurozone triggers a new wave of economic crisis. In this regard, the EU authorities are considering not only the introduction of border controls, but also the establishment of full control over eurozone capital in order to prevent its outflow. This suggests that officials are preparing to leave Greece from the euro zone. At present, the EU working group, consisting of deputy finance ministers and heads of EU treasuries, has already discussed the possibility of suspending the Schengen agreement and introducing a visa regime within a single Europe. According to officials, it is this measure that will help prevent capital flight from EU countries, as well as possible bank failures.

It is curious that when the spokesman for the Bank of Greece was asked about the position that the Greek central bank takes on this issue, he said that the central Greek bank was not aware of such plans.

It seems that with Greece in the EU are now considered very small. Euro-financiers do not even want to devote it to their plans.

It must be assumed that the European institutions still approve the border control, and it will be introduced at the first slightest reason. Union, and the care of states about their security, including financial, has not been canceled. And Germany is not a country whose opinion is not accepted in the EU.

Therefore, in the near future it is necessary to wait for heated debates on the “topical” European topic of migration control, capital outflows and border barriers.