Putin: Already in the spring the first submarine with Poseidon will be launched

From January 1, 2021, all (old) regulations of business supervision and control need to be terminated. It is necessary to save only those documents that meet modern requirements. The rest - to archive. 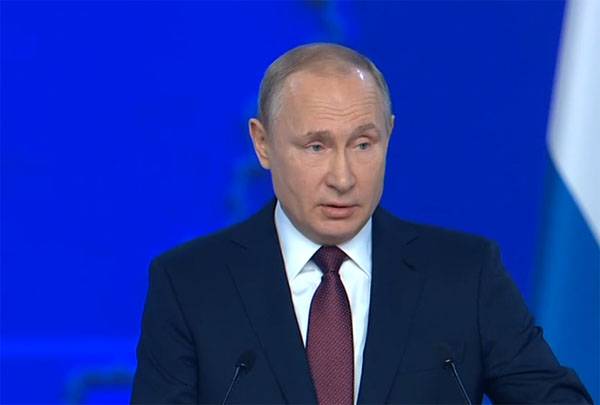 Many colleagues said: "Scary." Really scary. There are some folios in some departments. Since the Soviet times. Since the time of Ochakov and the conquest of the Crimea. Not from 2014 of the year, of course ... And since Alexander Sergeevich Griboyedov ...

Railway traffic on the Crimean bridge will begin this year. A detour around Krasnodar. This will give impetus to powerfully develop the Crimea, Sevastopol. The highway Moscow - St. Petersburg will open. Over the years 6 reconstructed 60 airports. The capacity of BAM and Transsib will increase.

We need to think about how to simplify visa formalities for tourists coming to our country - from the experience of the World Cup 2018 football.
The 5 generation 5G communication systems need to be started.

About space and defense

It is necessary to multiply increase the possibility of satellite constellation. We should organize the National Space Center, provide research and training.

We found unique solutions in the field of defense. This was done by our scientists, including young ones. The creation of the Avangard hypersonic complex is commensurate with the launch of the first satellite. At one time, the atomic project gave us atomic energy. But we need to use scientific and technical programs in civilian areas.

In the middle of 2020, we need to be one of the leading countries in the field of genetic research. A reactor was launched in the Leningrad Region, which will make it possible to create new materials.

For the first time in our shipyards in our time will begin to create research vessels that can work in the Arctic region as well. We need specialists for breakthrough technical solutions. We organize the processing of personnel for those industries that are just being formed.

Putin noted the need to improve secondary vocational education, including through the retooling of thousands of workshops in 2.

According to Putin, it is necessary to deepen cooperation with Belarus. The President noted the need for contacts with China, India, Japan, the countries of Southeast Asia. Putin noted the importance of working within the framework of the One Belt, One Way Project.

An acute issue of relations with the United States is the issue of US exit from the INF.

Yes, there have been major changes since 1987. Many states continued to develop missile weapons (INF), and Russia and the United States did not. But it had to be discussed. How do the US really act? Now they themselves are breaking and mobilizing their satellites. And they cheer him on this issue.

Then the Russian president explained in detail the points of the INF Treaty, touched upon the issue of deploying the US missile defense system in Romania and Poland.

Putin:
Russia does not intend to be the first to place such missiles in Europe. But if they are shipped from the US to Europe, it will create a threat to Russia. Such missiles have flying time to Moscow - up to 12 minutes. In response, Russia will have to create weapons and place them in relation to the territories where the decision-making centers on the use of missiles are located. As soon as such threats from the United States become real, we will immediately give an answer. But we do not want aggravation. The United States has already acted on missile defense. And what did it lead to? It is necessary to leave these illusions.

The president again spoke of "Daggers", "Peresvet", "Sarmat", "Poseidon" and other weapons.

Already this spring, the submarine will be launched with the Poseidon on board. The President noted the importance of this fact.