Hot round of Syrian junction. Russian military police and SAA are proactive in Manbidzh

December 27 2018
27
While on the night of December 25-26, almost every observer with access to Russian and foreign militarynews sources could please the eye with amateur video reports depicting the excellent fire work of the Syrian battery of Pantsir-S1 anti-aircraft missile and artillery systems on Israeli Delilah tactical missiles of long range, from the contact line section in the eastern part of Aleppo governorate they received a summary, our idea of ​​the further course of the Syrian military company and its final outcome. 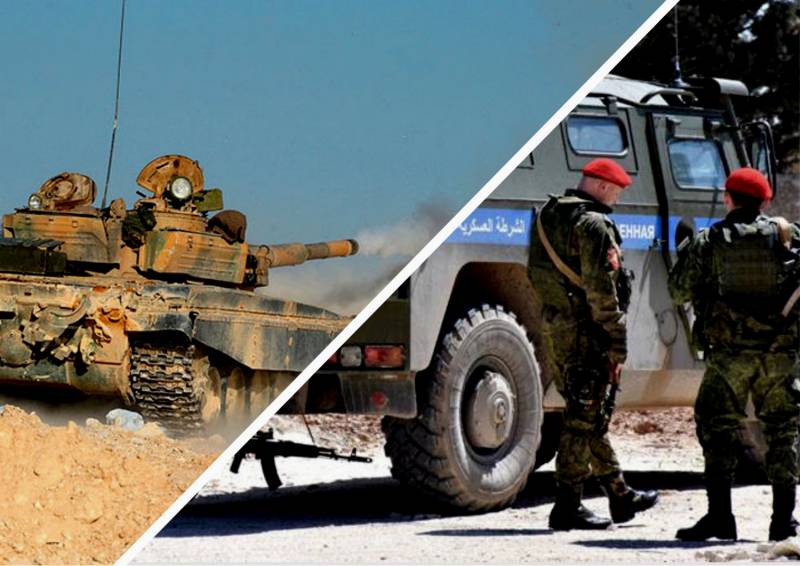 So, according to the Turkish state news agency Anadolu, which refers to the intelligence structures of the Turkish Armed Forces operating in the Kabasin region, and the Anatolian Agency, and Manbij on the day of December 25 after a short “reconciliation of hours” with field commanders of Kurdish YPG units in the direction of the El Arimah advanced an impressive convoy of SAA from 40 pickups with infantry, a certain number of main combat tanks, several armored personnel carriers, as well as trucks, to the eyeballs equipped with high-explosive fragmentation and armor-piercing tank shells, ATGMs and auxiliary equipment. Also, units of the Russian military police went to the area.

In accordance with information received from competent Syrian sources, the contingent coming into the Al-Arimah area is represented by units of the elite Syrian division of the Special Forces Tiger Forces, 1 and 4 Tank Divisions of the CAA, as well as a few detachments of the National Syrian Defense Forces (NDF). The fact that the command of the Syrian Arab Army selected the highly motivated and most tactically-savvy units of the Tiger Forces as the most numerous component of the grouping sent to Al-Arimah indicates only the fundamental importance of the tasks assigned to it. And it is not surprising, because, according to the syria.liveuamap.com tactical online map, by the evening of December 26, almost all US MTR units that had previously patrolled the eastern and northern approaches to the city left the Manbij area, leaving the YPG Kurdish people's self-defense units, the northwestern region of Rozhava is to be torn apart tenfold by numbers that outnumber FSA militants and units of the regular Turkish army.

There is absolutely no doubt that one of the main goals of the withdrawal of the American contingent from Manbija agreed with Ankara is an attempt to shake the combat stability of the Syrian government forces at the expense of clashes between CAA brigades and FSA pro-Turkish fighters clashing for control over Manbidge and adjacent territories devoid of staff patronage. To date, such a clever “road map”, agreed between the defense and foreign policy departments of Turkey and the United States, is quite a profitable solution for both parties. In particular, the movement of the Syrian army’s most powerful assault “fist” to the Manbidzh operational direction will certainly entail a weakening of the defensive capabilities of the CAA fortified areas located on the Idlib front, as well as in the “Husham’s pocket” known for very high-intensity armed clashes of government forces with Syrian Democratic Forces ".

As a result, numerous Idlib paramilitary groups (Hayat Tahrir al-Sham, Islamic Party of Turkestan, People’s Liberation Front, etc.), supported by Turkish artillery, will have a mass of tactical loopholes to break through the first line of defense of the SAA on the line the contact of the “Idlib adder” and eastward movement with the capture of Aleppo, Tell-Aran, Es-Safirah and Deir-Khafer. A similar type of loophole on the west coast of the Euphrates will appear in the SDF units supported by American artillery in the central part of Syrian Kurdistan (in the area of ​​Husham and Deir ez-Zor). The divisions of the ILC and US MTR are clearly not planning to leave these areas of Rozhava, which are replete with oil fields. As for Washington’s additional operational and strategic benefit from the “drain” of Manbij to the Turks, it undoubtedly exists and lies in Ankara’s returning complete freedom of action to the 6th naval strike groups fleet The US Navy in the Black Sea, bypassing the Montreux Convention, which is a real New Year's gift for Washington on the eve of the upcoming Navy provocations near the Kerch Strait. We discussed these points in our previous works.

An early introduction to the Kurdish Manbij area not only of the elite units of the Syrian army, but also of the Russian military police is an extremely wise joint decision of our General Staff and the Syrian Armed Forces command, since the Turkish military command, as well as the rebels supervised by it, is unlikely to decide to engage in armed confrontation with Russian military personnel capable of provoking a large-scale Turkish-Russian conflict. Conclusion: today there is every reason to believe that the current CAA roll into the western region of Syrian Kurdistan will allow Moscow and Damascus to ascend to a new step of restoring Syrian sovereignty over the previously lost northern sections of the Euphrates river. Moreover, the shameful repetition of the “Afrin scenario” will be completely ruled out, when in the hope of bringing the terrorist militias out of Idlib, the Kurdish canton Afrin was transferred from Idlib to the control of the pro-Turkish thugs.