Navy officer for the first time headed by the GRU

December 10 2018
112
Information Agency TASS with reference to its own sources, announces the appointment of a new head of the Main Intelligence Directorate of the General Staff of the RF Armed Forces. Recall that the term "intelligence" Headquarters returns after the need for this step drew the attention of President Vladimir Putin. 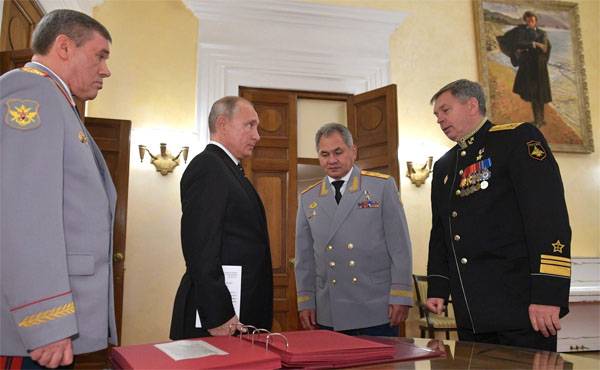 The new head of the GRU was Igor Kostyukov. And this appointment has already entered into history military intelligence of the Russian Federation, since Kostyukov becomes the first naval officer, which the GRU of the RF Armed Forces headed.

Igor Kostyukov - Vice-Admiral of the Russian Navy. Previously, he was in the position of the acting head of the Main Intelligence Directorate.

Vice Admiral Kostyukov has already received the department standard by the Minister of Defense of Russia Sergey Shoigu.

What is known from open sources about the new head of the Russian military intelligence?

He is 57 years old. He has received a naval education, a military diplomatic academy and service in the same intelligence department. It is also known that Igor Kostyukov took part in the planning of a military operation in the Syrian Arab Republic. He was awarded the star of the Hero of Russia in 2017 year.

Attention is drawn to the fact that Vice-Admiral Kostyukov is on the American sanctions list with the wording "for interfering in the American elections in the 2016 year."

The previous head of department, Colonel-General Igor Korobov, passed away on November 21 at the age of 62.