December 3 - Day of the Unknown Soldier

December 3 2018
29
Every year (since 2014) in the Russian Federation is a memorial date dedicated to the memory of all those soldiers who did not return from the front, and the dust of which continues to remain nameless. We are talking about such a memorial date as the Day of the Unknown Soldier - December 3.


This day was not chosen by chance. It was 3 on December 1966 of the year that the ashes of the Unknown Soldier, who had previously been buried in a mass grave near the entrance to Zelenograd, were buried in the Alexander Garden near the Kremlin wall. In turn, that event (reburial) was timed to the 25 anniversary of the defeat of the Nazi invaders in the battles near Moscow. This rout went into history as the first major defeat of the Nazi troops in the Second World War, and became a signal to those who in Berlin still continued to believe the "blitzkrieg".

About how the burial of the Red Army was discovered in Zelenograd.

In the fall of 1963, students from one of the local schools discovered a dip in the forest. Behind the settled edges of the earth human remains were visible. The schoolchildren decided to take several bones and skulls from a spontaneous grave in order to show them to their biology teacher. Subsequently, the children were informed about the discovery by the school’s director, Yuri Vorobyov, who was himself a front-line soldier. Further, an official investigation began, in which employees of the military registration and enlistment office of the Leningrad district of Moscow took part. In the course of the burial study, 11 bodies of the Red Army were discovered.

After the implementation of the necessary procedures, it was decided to reburial the remains of the soldiers who died in the battles near Moscow. The coffins with the ashes of the defenders of the capital were exhibited in the same school, whose students found the remains of the dead. This event caused a wide public response, and thousands of local residents came to the farewell ceremony for the fighters killed in 1941.

The dead unknown soldiers were buried on the 40-m km of the Leningrad highway. And in that very 1966, the dust of one of the buried Red Army soldiers was decided to be reburied near the Kremlin wall, where the Eternal Flame was subsequently lit (in May 1967). The dust was placed in a special titanium coffin, which was made at the Zelenograd machine-building plant "Elyon". The coffin was twisted with a ribbon, which today is called St. George, and then it was associated with the ribbon of the soldier’s order of Glory. 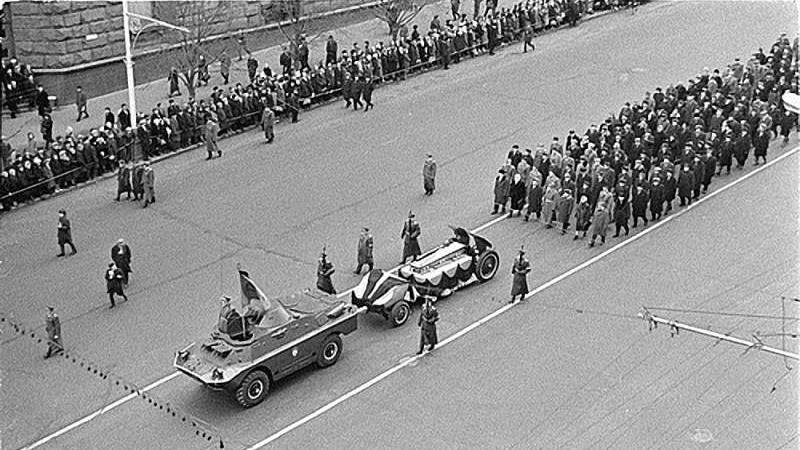 December 8 1997 was established in the Alexander Garden post number XXUMX.

This post keeps the memory of all those soldiers who laid down their heads for the Fatherland, and whose names, unfortunately, could not be established. Speaking of the Unknown Soldier, whose ashes rest in the Alexander Garden, historians suggest that the remains may belong to one of the fighters of the 354 th rifle division. It was near the village of Kryukovo that the Red Army soldiers of this division, which was formed near Penza, accepted their first battle.

The Tomb of the Unknown Soldier has become a place of worship for millions of people, including those who still do not know anything about the resting place of their relatives who fell during the Great Patriotic War. The grave of the Unknown Soldier and the burning Eternal Flame are also the memory of a great war that has touched almost every family living in Russia and throughout the post-Soviet space.
Ctrl Enter
Noticed oshЫbku Highlight text and press. Ctrl + Enter
Military Reviewin Yandex News
Military Reviewin Yandex Zen
29 comments
Ad