The market in besieged Leningrad: evidence of survivors. Part of 2

November 14, 2018
49
The fair indignation of the people of Leningrad was caused primarily by those who frankly profited from the tragedy of the city.


“How disgusting are these well-fed, lush-white“ talons ”who carve out card coupons from starving people in canteens and shops and steal bread and food from them. This is done simply: “by mistake” they cut out more than they should, and a hungry person discovers it only at home, when it is impossible to prove anything to anyone, ”says blockbuster AG Berman in September 1942 of his impressions of injustice.

“In the queue, at the counter, they all follow the bread and the arrow with greedy eyes so that they do not hang out. And they often quarrel, and swear in plaintive thin voices with saleswomen who rudely answer them, and, well fed, despise this hungry, greedy and helpless crowd. ”

The prices that were inflated on the black grocery market are simply amazing: in April, 1942 of the year a kilogram of butter can reach the price of the speculators in 1800 rubles! In the diaries, blockaders record a special aversion to the fact that such products are obviously stolen. The scale of theft, according to eyewitnesses, exceeds all reasonable limits and elementary humanity. Here is what A. A. Belov from Leningrad writes:

“Who you do not talk to, you hear from everyone that the last piece of bread cannot be fully received. They steal from children, from cripples, from patients, from workers, from residents. Those who work in the canteen, in stores, or at the bakery, today are a kind of bourgeois. Not only is she herself full, she also buys clothes and clothes. Now the chef's cap has the same magical effect as the crown during tsarist time. ” 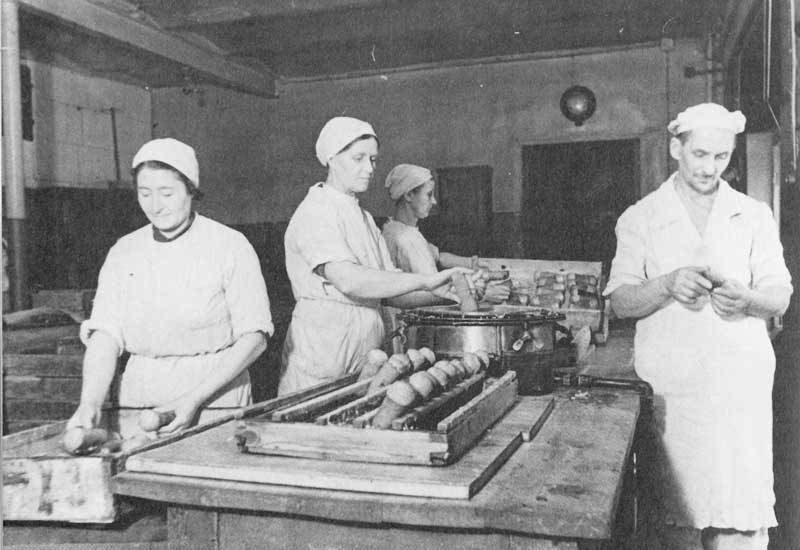 Perhaps one of the most resonant pictures of the period of the blockade of Leningrad.

In Leningrad there was such a phenomenon as canteens of reinforced food. Particularly contrasted with the surrounding gloomy and painful reality of the workers of such institutions. The artist I. A. Vladimirov writes about this:
“Neat and cleanly dressed waitresses promptly carry trays of food and glasses of chocolate or tea. The order is monitored by the "administrators." This is living and very convincing evidence of the health benefits that a person receives from “enhanced nutrition” in the “kitchen factory”.

In fact, all the waitresses and, of course, most of all the “bosses”, serve as examples of a happy, full life in our hungry times. Faces are ruddy, cheeks, lips are poured, and oily eyes and the fullness of the shapes of well-fed figures show very convincingly that these employees do not lose their kilograms of body weight, and gain weight significantly.

“This is where donors need to be searched,” the military doctor, who was sitting next to the table, told me. I, of course, felt that not a single angry, rounded waitress would give a drop of her blood, but said nothing and only remarked: “It is unlikely that this will succeed.” A few days later, at dinner, I again met with the doctor and asked about the donation.
- You will not believe how many abusive answers I have heard enough. Without embarrassment, they covered me with the most disgusting areal expressions like: “Oh, you, so-and-so! Want to take money for our blood! No, do not need your money! I will not give up my acquired blood! ”

Orientalist A. N. Boldyrev wrote in the late autumn of 1943:
“I was at the same officer fleet meeting. Again the lecture did not take place due to the complete absence of listeners, they again fed me with a small but delicious cold dinner. Again I was amazed at the warmth, the abundance of light, and the strange lack of humanity at the saturation of the serving people (a lot of the fattest overdressed girls). ”

It is noteworthy that the NKVD Directorate of Leningrad and the region closely monitored the moods of the townspeople regarding the numerous speculators. So, in their summaries by the end of 1942, they mentioned the increasing frequency of dissatisfied statements about the work of canteens and shops, from which food was dragged to the black market. Rumors of mass speculation and the exchange of stolen goods for valuables began to circulate more and more often. IN historical sources contain excerpts from letters, many of which were sent to the law enforcement agencies of Leningrad: “We are entitled to a good ration, but the fact is that they steal a lot in the cafeteria” or “There are people who have not felt hunger and are now raging with fat. Look at the saleswoman of any store, she has a gold watch on her wrist. On another bracelet, gold rings. Every cook who works in the canteen now has gold. " 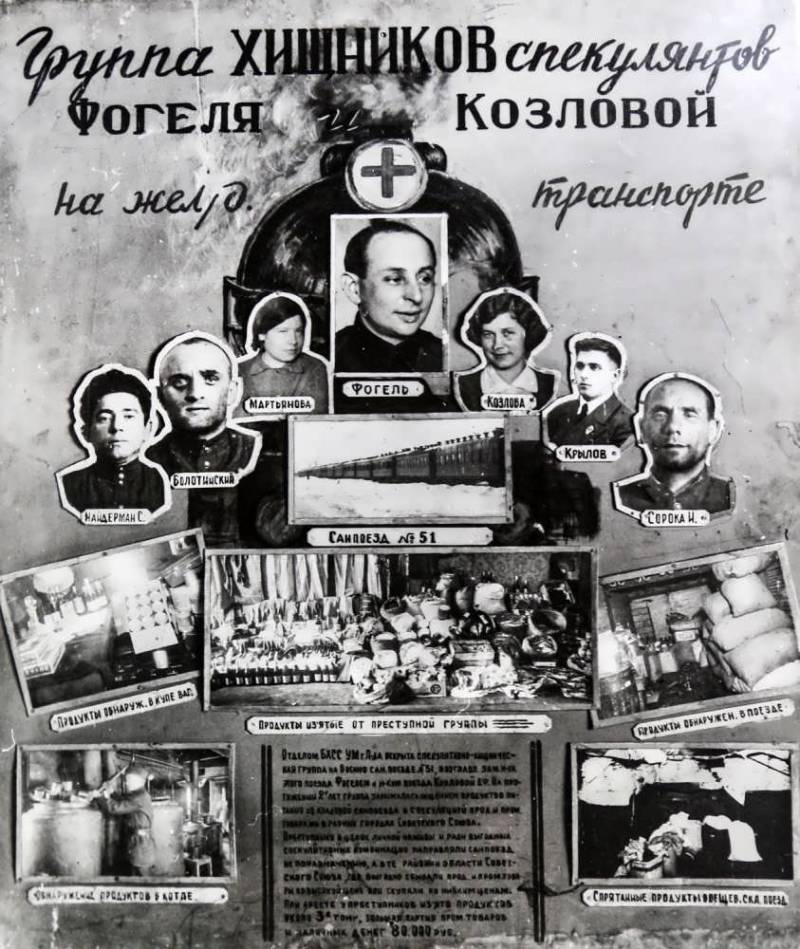 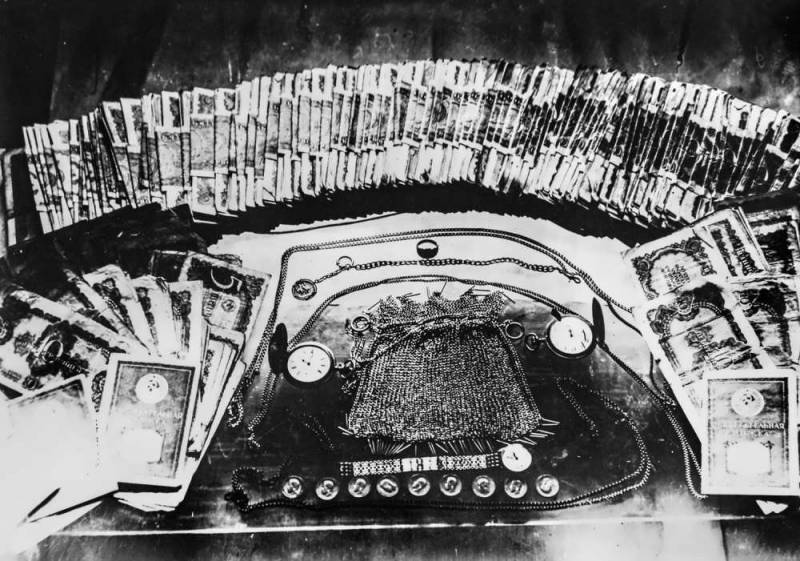 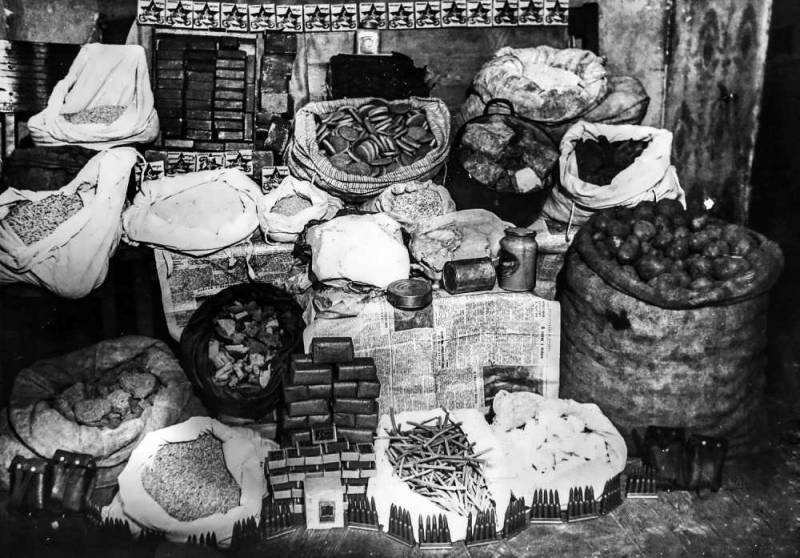 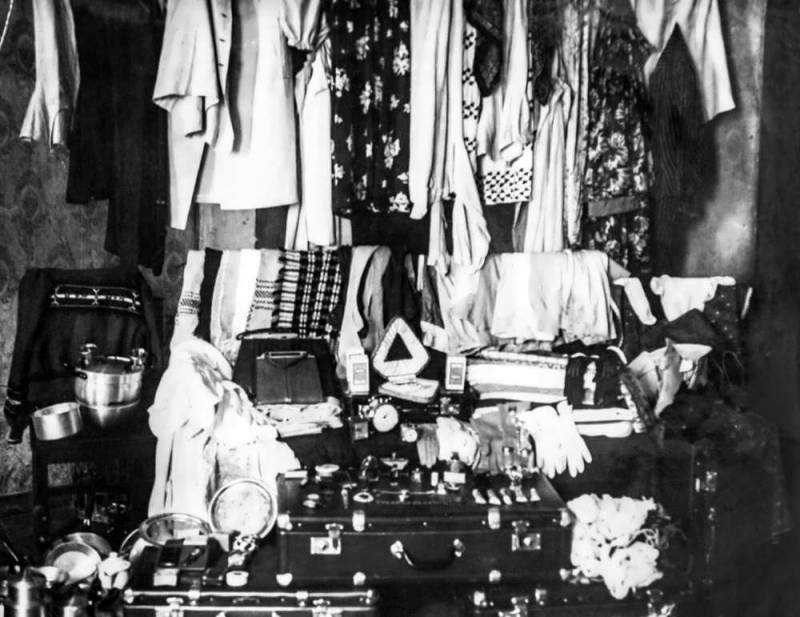 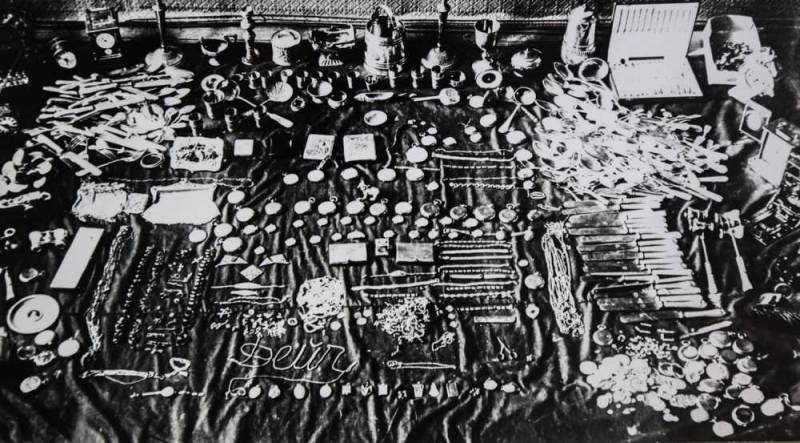 Speculators and confiscated values ​​that were obtained for the products.

On average, in the autumn of 1942, for ten days, the NKVD organs fixed approximately 1 messages on 70 residents of the city - discontent among the masses grew. At the same time, the leadership of the NKVD informed the leadership of the Soviet Union that “the main contingent of those arrested for speculation and theft of socialist property are employees of trade and supply organizations (distribution network, warehouses, bases, canteens). The main object of theft and speculation are food and other normalized scarce goods. ”

The market relations of the besieged city created a special "seller-buyer" relationship. Women as the most important source of stolen products demanded in exchange for food related goods. Wife of Dmitry Sergeyevich Likhachev recalls:

"AT. L. Komarovich advised to change primarily women's things. I went to the Nourishing Market, where there was a flea market. Took her dress. I changed the blue crepe de chine one kilogram of bread. It was bad, but the gray dress was traded for a pound of 200 grams of duranda. It was better. ”

Dmitry Likhachev himself writes:
"Komarovich said:" Jura finally realized what the situation was: she allowed to trade her model shoes.

Jura is his daughter, she studied at the Theater Institute. Fashionable women's things - the only thing that could be exchanged: the products were only from the waiters, saleswomen, cooks.

Over time, speculators have learned that you can visit apartments in Leningraders in the hope of a profitable exchange. Many blockaders could no longer go out and received meager food from close relatives, who in the canteens were shopping for dependency cards. And those who could walk had already managed to exchange everything of value for crumbs of food.

The literary critic D. Moldavsky recalls:
“Once a certain speculator appeared in our apartment - rosy-cheeked, with gorgeous wide-set blue eyes. He took some maternal things and gave four glasses of flour, a pound of dry kissel, and something else. I met him already descending from the stairs. For some reason I remembered his face. I remember well his sleek cheeks and bright eyes. This was probably the only person I wanted to kill. And I regret that I was too weak to do this ... "

Dmitry Sergeevich Likhachev in his memoirs writes:
“I remember how two speculators came to us. I lay children too. The room was dark. It was illuminated with electric batteries with light bulbs from a flashlight. The two young men entered and quickly asked for a patter: “Baccarat, are there any cameras?” They asked something else. In the end, they bought something from us. It was in February or March. They were scary like grave worms. We still moved in our dark crypt, and they were ready to eat us. ” 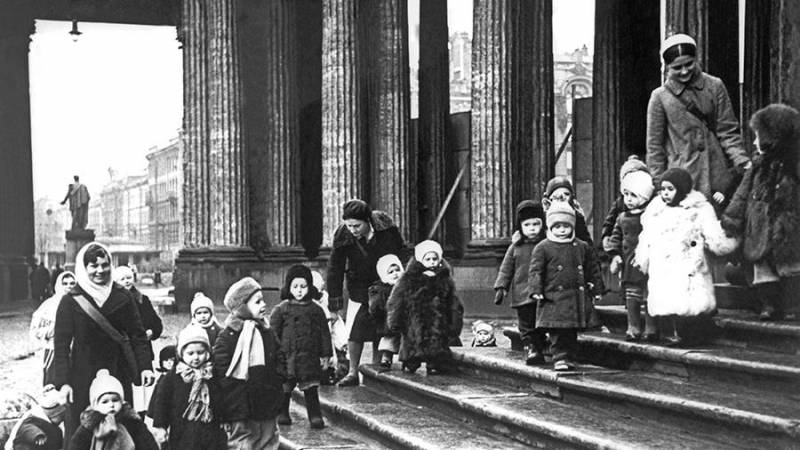 Children became one of the first victims of theft and speculation in besieged Leningrad.

The system of theft and speculation in the terrible conditions of the blockade worked flawlessly and did not accept people with remnants of conscience. The case from which the blood runs cold is described by the artist N. V. Lazarev:
“Milk appeared in the children's hospital - a very necessary product for babies. In the dispenser, according to which the sister receives food for the sick, the weight of all dishes and products is indicated. Milk relied on a serving of 75 grams, but each was underfilled with grams on 30. It angered me, and I have repeatedly stated this. Soon, the barmaid told me: "Talk again - and fly out!" And indeed, I flew out into unskilled laborers, in that time - labor soldiers. "

The most base human vices, including the lack of pity for children, manifested themselves in all their gloomy glory in the horrors of besieged Leningrad.

Based on:
Weekday feat.
Lazareva N.V. Blockade.
Likhachev D. S. Memoirs.
Children and blockade. Memories, fragments of diaries, eyewitness accounts, documentary materials.
Pyankievich V. L. “Some die of hunger, others are cashing in, robbing the last crumbs of the first”: participants of the market trade in besieged Leningrad // Works of the Faculty of History of St. Petersburg University, 2012.