November 11, 2018
161
The Norwegian press publishes the details of the incident with the frigate of the Royal Navy "Helge Ingstad" project "Nansen". Recall that while participating in the NATO exercises "Trident Juncture-2019" the frigate made a collision with a tanker flying under the Maltese flag.


The Norwegian media reports, citing the investigation, say that the tanker was fully loaded with oil at the time of the collision. Only a fluke did not lead to the spill of huge volumes of petroleum products off the coast of Norway in the area of ​​Bergen. 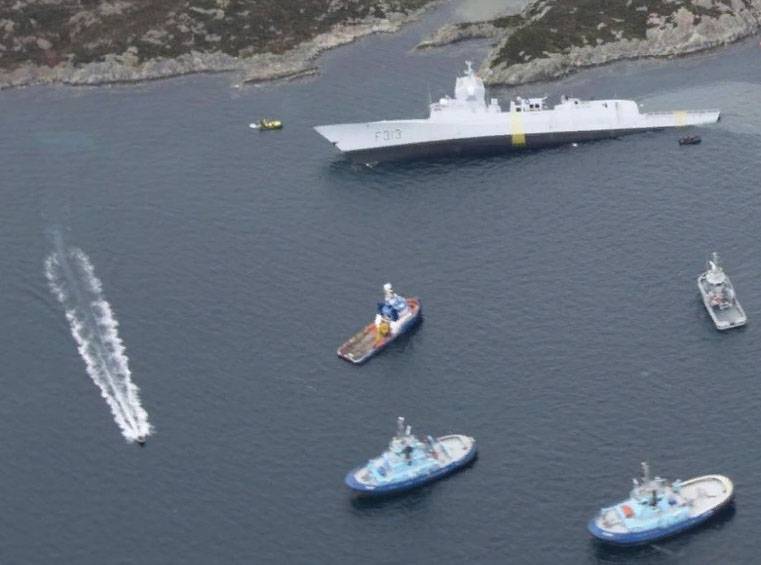 It is noted that the crew of the frigate was warned about the dangerous approach to the tanker. It turns out that for what reasons no measures were taken to avoid this collision. More precisely, the measures were taken, but only at the very last moment before the “contact” with the tanker "Sola". A study of the data led to the conclusion that by the time of the collision, the Norwegian warship was on 17 nodes, and the oil tanker was on seven.

From the preliminary report of the investigating commission:
The crew did not take the necessary measures to prevent a collision. The ship did not have a clear understanding of the operational situation in the area in which Helge Ingstad was located. Sola TS has reported Ingsta on several occasions, also duplicating signals of a dangerous approach to coastal services.

The commander of the Norwegian frigate states that actions to prevent a collision were taken "late", as a sharp maneuver could lead to the hull of the warship literally fling rocks, which in the event of departure from the collision would be directed frigate.

Meanwhile, it was stated that the tanker Sola was trying to convey to the crew of the Norwegian frigate in which particular direction it was worth making a maneuver, taking into account that there was enough space in the collision area for such a maneuver. But it did not help.

Adding to the oddities is that a suggestion was made in Norway about a possible shutdown of ship identification systems on the frigate.

It is assumed that this was done in connection with the tasks that were set for the crew of the combat ship in the framework of NATO military maneuvers.

After a collision with a tanker, the Norwegian frigate lost control, the rudders failed, and the warship went into drift. At a speed near the 5 nodes, the “Helge Ingstad” hit the rocky coast north of Bergen. Meanwhile, in the internal compartments, water flowed through a hole below the waterline. As a result, broken wiring “shorted out”, smoke appeared. The crew in the number of 137 people left the ship. Several people were injured, injured and poisoned by acrid smoke.

So that the ship did not break on the rocks, with the help of tugs, its position was corrected.

The Norwegian military command said that this is a strong blow to the royal the fleet. Representatives of the Norwegian Navy refrain from other comments to the press.