Rings "Anaconda". To protect by capture

November 9, 2018
6
The large-scale NATO exercises Anaconda-18 started in Poland. The maneuvers are held every two years under the leadership of the Operational Command of the Polish Army. Despite the fact that the goal of the exercises is always the same - to check and enhance the combat capability and coordination of the member countries of the alliance to prepare for a possible armed conflict, each maneuver has its own characteristics. And these are no exception. 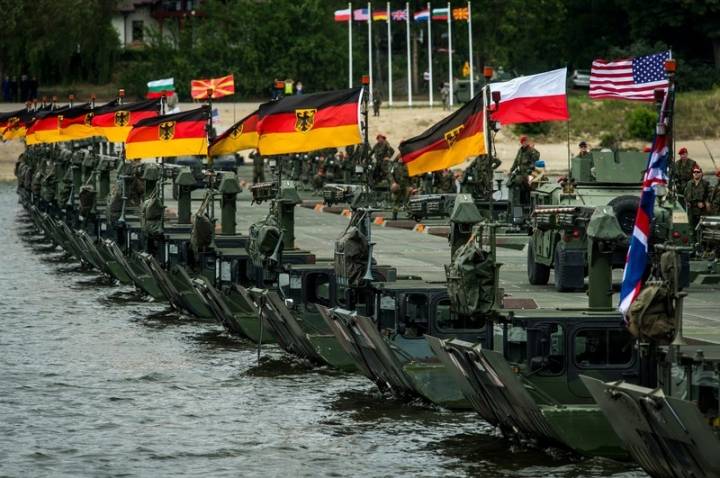 This year the first feature will be that this year the exercises will be held not only in Poland, but also for the first time in Lithuania, Latvia and Estonia, as well as on the Baltic Sea. This will allow us to work out the attack on Belarus, which will be needed to protect the Suvalk corridor. No wonder that this corridor in the alliance is also called the Suvalk Gap, which will become a key problem in a possible armed conflict with Russia.

NATO Allied forces, surrounding the Kaliningrad region and the western borders of Belarus, will work out the defense of the Suvalk corridor by probable seizure of the Grodno region of the Republic of Belarus. Given the width of this area, it can be taken under fire control from both the Russian and Belarusian sides, so during real hostilities it will be strategically important for NATO to prevent this.

To this end, November 10 tank and mechanized units will work to overcome the water barrier in the area of ​​the city of Helm. This clearly indicates that in case of war they will do the same on the Neman River in the Grodno region. The issues of Neman forcing have already been worked out in the summer at the saber strike exercises in Lithuania.

In addition, measures are planned to work out the resettlement of the civilian population from the area of ​​hostilities. This area will be a city in northeastern Poland of Bialystok, which is located near the border with Belarus. This is reminiscent of how Germany acted during World War II, when civilians were forcibly evicted and in their place were Wehrmacht troops to prepare for a further offensive.

Another factor provoking increased tensions in the region was non-transparency in conducting exercises. In order not to invite foreign observers to the exercises, Warsaw stated that thousands of Polish military would take 12,5 in maneuvers (according to the Vienna Document, the exercises are subject to international observation if more than 13 thousand people are involved). In addition, “Anaconda” was stretched for two months and divided into separate stages, while conducting in parallel supposedly other exercises of large formations of all types of aircraft.

It would seem that "Anaconda 2018" should take place as transparently as possible in such a complex geopolitical situation. However, at the exercises, attempts are being made to impede the ability to track the number and movement of troops, the blockade of Kaliningrad and Belarus is being worked out, a clear desire to “intimidate” Russia is demonstrated.