31 May 2012
44
20 years this year has been fulfilled since the start of the peacekeeping mission in the Pridnestrovian Moldavian Republic. In the 1992 year, after an almost three-year armed conflict, in which Moldavian and Transnistrian troops took part, Russia's intervention made it possible to stop the ongoing massacre between the once fraternal peoples. The conflict began to flare up due to the fact that a bill was published in the Moldovan capital, according to which Moldavia, which considered the Pridnestrovian Moldavian Republic as its territory, decided to leave one state language in the country - Moldavian. At the same time, those parents who decide to teach their children to speak, for example, in Ukrainian or Russian, according to this draft law, could face severe punishment, even deprivation of parental rights. This decision of the new authorities caused a storm of indignation among the population of Transnistria, since most of the people living on these lands were ethnic Russians and Ukrainians. 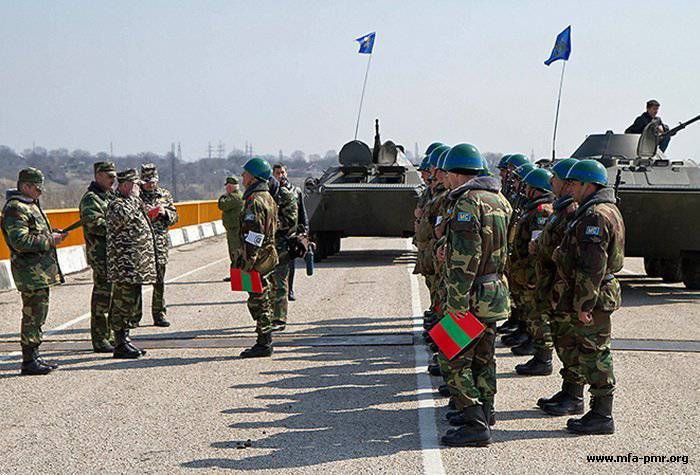 Since then, relations between Chisinau and Tiraspol remain strained, to put it mildly, and at every opportunity one of the parties declares provocations by the enemy. The peacekeeping contingent, which today includes 495 Transnistrian, Russian 402, Ukrainian 10 and Moldovan 355 military, acts as a kind of buffer between the Moldovan and Transdniestrian territories.

After the incident at one of the roadblocks, which led to the murder of a Moldovan citizen by a Russian peacekeeper, a real wave of protest rose in Chisinau. Moldovans began to demand the withdrawal of Russian soldiers from the border between Moldova and Transdnistrian territory. However, the case of the murder of a Moldovan was seriously investigated, and with the participation of the Moldovan side itself. Only here it is surprising that in Moldova, not all the media have decided to reveal the truth to their citizens. But the findings of the multilateral commission were very interesting. It turned out that on January 1, after a stormy New Year's night, one of the local residents decided to entertain themselves in a peculiar way and ram the checkpoint on which the Russian "blue helmets" were. A drunk driver (alcohol in impressive quantities was found in his blood) first drove onto a bridge across the Dniester and broke a wooden barrier. After that, he called gas, and disappeared from the scene, despite the attempts of the peacekeepers to stop him (the attempts at that time were oral). However, this was not enough for him, and after a while he decided to repeat the “feat”. This time, the sentry gave the driver a sign to stop moving and stop, and made several shots in the air, as the Moldovan citizen did not react to any signs. But the shots in the air on the "hero" did not work. He continued to put pressure on the gas, after which the soldier fired a shot, wounding the young man. The wounded Vadim Pisary, with the help of Russian troops, was taken to hospital, where he died a few hours later. After conducting a thorough inspection of the scene of the incident, it turned out that a VAZ Pisarem car was hijacked shortly before the incident on the river bridge separating the conflicting parties.

The fact of repeated firing into the air (although the instruction for the sentry was enough once) was confirmed by the examination, during which all the cartridges were assembled and studied at the scene of the incident. However, the Moldovan side cared little about the fact that Vadim Pisari himself arranged a blatant provocation and clearly did not realize the possible consequences of his antics, since he was in a state of strong alcoholic intoxication.

Surprisingly, the Russian peacekeepers and high-ranking Moldovan officials, who certainly need to know the real situation on that ill-fated day, continue to blame all mortal sins.

However, in this regard, it is worth paying attention to another episode that occurred already on the Moldovan-Romanian border in less than 2 weeks after the incident at the Russian roadblock. At one of the border crossings, Romanian border guards carried out searches of those who were traveling from Moldova to Romania. 23-year-old Moldovan citizen Cyril Motpan decided to drive through the cordon without stopping (without the required inspection). The Romanian border guards, not expecting this from the next “traveler”, tried to block his path, but Motspan turned his car around and wanted to hide in Moldovan territory. At this point, the Romanians opened fire on the car and injured a Moldovan citizen.

It would seem that two almost identical cases - there is an attempt of unauthorized entry into the adjacent territory. Only in the first case, Chisinau, for some reason, decided to make a big talker with threats against Russian peacekeepers and calls for them to leave Moldovan territory, but in another case everything went much quieter and calmer and Romanian border guards didn’t blame anyone for unjustified cruelty.

In this connection, the role of the peacekeeping contingents for ensuring stability in the Pridnestrovian Moldavian Republic was recently held in Odessa. At the meeting, the Transnistrian Minister of National Security Vladislav Finagin clearly identified the problem. He is confident that the Moldovan authorities are simply clinging to that January incident, to get a strategically important border crossing under their control. However, according to the same Finagin, Transnistrians are categorically against the departure of the Russian peacekeepers. According to his statements: it is not a secret to anyone that it is the Russian peacekeeping contingent that today is the guarantor of stability in the region, and should he leave Transnistria, how can another war start here.

By the way, for those individuals who are confident that the Russian "blue helmets" in Transnistria have nothing to do, it is worth recalling that almost 168 thousands of Russians live in Transnistria today, of which most have Russian passports. At the same time, it is necessary to clarify that the entire population of Transnistria is slightly over half a million people. In addition, more than a hundred and fifty thousand Ukrainians live in the PMR today, and the majority live with Ukrainian passports. It turns out that the citizens of Moldova are a minority. Then the position of the Moldovan authorities, who are trying again and again to talk about the fact that Transnistria is an integral part of Moldova, is completely incomprehensible.
One should not forget that since the beginning of the conflict between Tiraspol and Chisinau in Transnistria, 6 plebiscites have already passed, during which the attitude of the inhabitants of the Republic towards independence was clarified. In 1991, independence was in favor, not a lot is not enough, 97,7% of those who voted. By the way, representatives of the US Department of State were present as observers at the referendum (after all, for many this is an indicator of the “success” of elections or a referendum) ... In 2006, the PMR held a referendum on whether residents want republics to support the course of further accession of the PMR to the Russian Federation. About 78,5% of voters took part in the plebiscite, 97,1% of whom voted in favor of joining Russia. It turns out that not only Russians, but also at least 44% of the population of Transnistria with the right to vote, wished for the unification.

Such a referendum was not recognized as legitimate neither by Ukraine, nor by Moldova, nor by the USA, nor the EU. Still would! Neither the United States nor the EU, by definition, can not afford to have Russia rooted in a new territory. Moldova is clearly not enthusiastic about the final farewell to the TMR. And Ukraine can be understood, because the results clearly hurt Kiev, as they say, for living. After all, a large percentage of Ukrainians living in Transnistrian Moldavia voted for joining Russia, which follows from the results of that referendum. According to the custom of recent times, the words that the results of the referendum were falsified by the Russian special services rained down, people were subjected to Russian propaganda before the plebiscite and all in the same spirit. In general, the classic techniques from the orange store ... Now how? If propaganda, then exclusively Russian (or Surkov), and if European or American, so exclusively the struggle for democracy and human rights ...
Today, representatives of the opposition in Ukraine decided to take advantage of the meeting in Odessa of the parties on issues of Transnistria in general and the presence of the Russian peacekeeping contingent there in particular. Activists under different political banners declare that if Transdniestria, if it should join anyone, it should be exclusively to Ukraine. Their argument is this: Transnistrians simply do not understand that from Tiraspol to Russia there are more than 1000 km and this thousand is completely Ukrainian ... The obvious hint is that if the TMR suddenly becomes a new Russian region, then Ukrainian politicians will do everything to have honey in Transnistria It did not seem ... True, this is not a state position. At least, official Kiev is silent, as, indeed, official Moscow. But here, let's say, official Moscow gives signs ...

It is worth recalling that more than 2 months Dmitry Rogozin is in the position of the representative of the President of Russia on Transnistria. His appointment is clearly related to the fact that in the same 2006 year, when the referendum was held in the Transdniestrian Moldavian Republic, the faction from the Rodina party, which was led by Rogozin at that time, at one of the plenary sessions in the Duma took the initiative to appeal independence of PMR. It turns out that the Russian authorities, by the appointment of Rogozin, made a rather unambiguous hint that if they didn’t listen to Motherland, then Rogozin’s proposal six years ago could well be implemented now, if the Moldovan authorities continue to try to get rid of peacekeeping contingent from Russia.

In general, the question of the status of Transnistria remains open, but the situation in recent years is clearly tense. In this regard, it is necessary to try not to allow new provocations, often organized with the help of the Moldovan authorities towards the Russian peacekeepers.