US offers Ukraine to strengthen the frigates Oliver Hazard Perry

October 18 2018
127
The US military attache in Ukraine handed over a letter, which was reportedly signed by representatives of the US Navy Command. The letter is addressed to the Minister of Defense of Ukraine Stepan Poltorak, and in this letter, according to the press of Ukraine, contains a proposal to "increase the defense capability of the Ukrainian naval forces in the Black and Azov Seas". 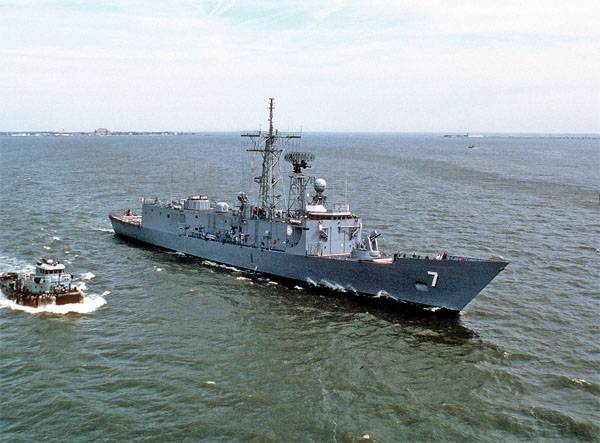 The materials of the Ukrainian media say that in Washington they allegedly offer Kiev, in the framework of military-technical assistance from the United States, to acquire American warships. We are talking about frigates type Oliver hazard perry... This type of frigate was built in the United States between 1975 and 2004. At the same time, the States were actively exporting these warships. Today they consist of fleets such countries of the world (in addition to the USA itself) as Egypt, Turkey, Poland, Taiwan, Spain, etc.

At the same time, the United States is going to "transfer" to Ukraine the most outdated modifications of these frigates, which have not undergone modernization.

The offer itself is clearly related to the sale. Apparently, the United States made the appropriate conclusions from how Poroshenko cheerfully informed his compatriots about the acquisition of decommissioned coast guard boats (“Island” class). Now, apparently, they decided that on floating trash and on Poroshenko’s desire for self-praise you can earn more.
Ctrl Enter
Noticed oshЫbku Highlight text and press. Ctrl + Enter
We are
Reports from the militia of New Russia for 27-28 September 2014 of the yearYuri Drozdov: Russia prepared the role of the sacrificial calf
Military Reviewin Yandex News
Military Reviewin Google News
127 comments
Information
Dear reader, to leave comments on the publication, you must sign in.