Defense Ministry will select the best mine detectors in Chechnya

29 May 2012
4
Until the end of the year, the Defense Ministry will test several mine detectors in real minefields in the Caucasus 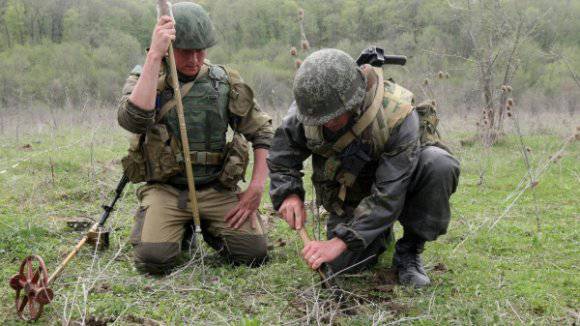 In June and August, 2012 will be tested in Chechnya by natural tests of new mine detectors, which enterprises offer to representatives of the Ministry of Defense for procurement. As a source in the General Staff told Izvestia, the management of the engineering troops will take out the representatives of the manufacturers for real minefields to check the quality of the products. If no one gets blown up, mine detectors will buy for the troops.

- Devices need to look at these mines, which are covered with foliage and descended from the mountains of the soil. We have to buy the best, because we are talking about the lives of our soldiers, - explained the source "Izvestia".

He stressed that no one will send engineers and designers to minefields. Contract soldiers will be engaged in demining, using both experimental devices and regular ones. But the creators of mine detectors will monitor the demining process.

So far, there are three devices in the test lists - the Korshun radio linear locator, capable of searching for semiconductor components of explosive devices, a selective induction mine detector for searching metal objects, and a wire line finder that detects wires from remotely controlled land mines. However, as stressed in the General Staff, “the doors are open for all manufacturers who are ready to go.”

- Each device has its own characteristics, and in general they do not compete with each other. The decision will be made by the sappers themselves, and it will depend on the convenience of these devices, ease, accuracy, explained the representative of the engineering troops.

“For a hand-held mine detector, weight is of great importance - the heavier the device, the harder it is to work with it, because you have to hold it all the time, sometimes for several hours,” the representative of the engineering troops explained.

A representative of the General Staff, familiar with the upcoming tests, explained to Izvestia that the new mine detectors are different from those in service, their “range” and ability to detect explosive objects not only in the ground, but also in concrete, masonry, inside building structures.

In addition, the devices are able to calculate the coordinates of mines and land mines found using GPS / GLONASS navigators. Thanks to this, it will be possible to draw up an accurate map of minefields and think up a technology for further destruction.

Viktor Murakhovsky, editor-in-chief of the Arsenal of the Fatherland industry magazine, explained to Izvestia that the physical principles on which mine detectors work have not changed for many years. Therefore, the main struggle of manufacturers is for the convenience of using devices, reducing weight and increasing the sensitivity of sensors.

- Sending signals of a certain range and analyzing the reflection, the device creates a "cast" of the device and compares it with its database. If there are coincidences - a signal is issued, - explained Murakhovsky principle of operation of modern mine detectors.

According to him, the most valuable are the databases of devices - the so-called signatures with which the device compares the signal. The larger it is, the greater the likelihood of detecting an explosive device.