October 6 2018
12
Let a person, in interaction with a computer-translator, limit his requirements to strict and predictable frameworks in which there is no place for living spontaneity, and the computer will receive comfortable working conditions that meet its technical, rather than living, essence, which is not in it and cannot be! 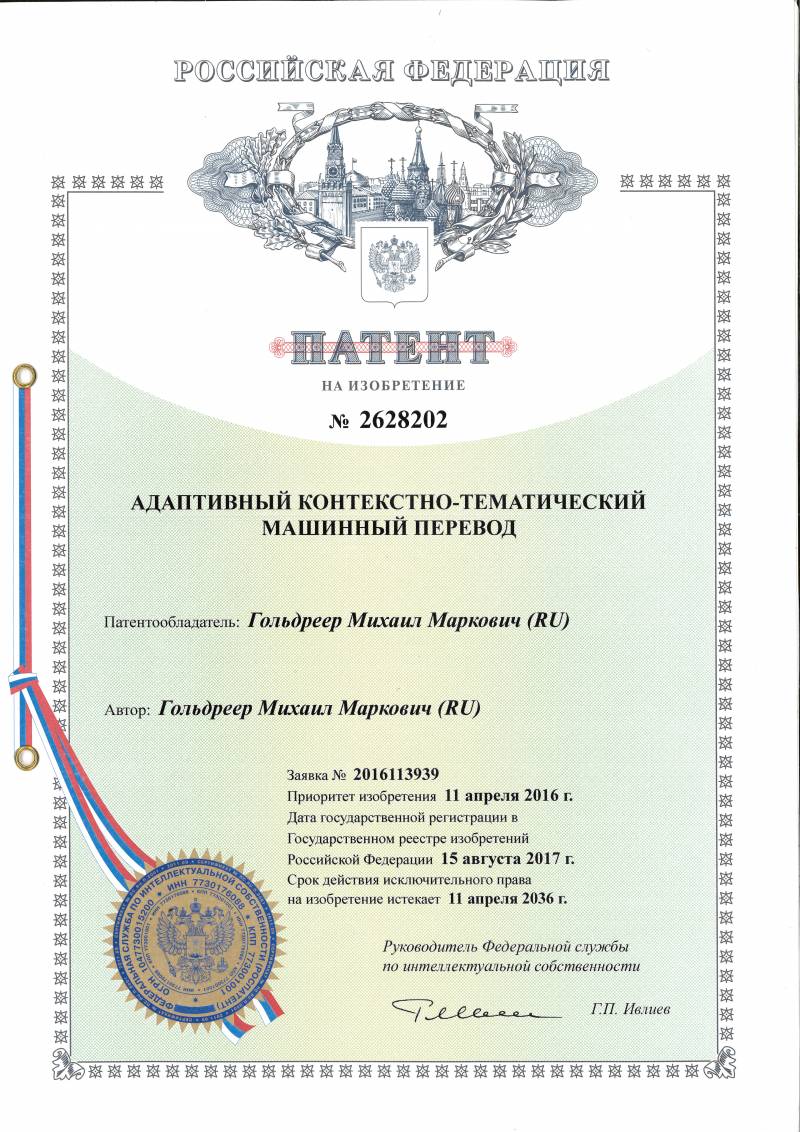 Guided by this formulation of the problem, I have spent seven years working for the last two years on patenting (I am proud that Americans have spent their 6 years on obtaining their patent in Russia!), Registered my invention in the summer of 2017, the 2628202 patent number called "Adaptive context-themed machine translation "(available on the Rospatent website).

In this way, everything will work like this. The user orally or in writing sets the translation system some text. The system does not accept it entirely, as the previous systems, but each complete sentence-phrase separately, immediately starting to translate this phrase. On the screen of his gadget, the user, after each phrase of his text, sees another phrase in his native language, the so-called standard phrase, which the system found in his memory as an analogue that most accurately reflects the meaning of what is said in the phrase set by the user. Along with the standard phrase, the names of those that are able to correspond to this phrase appear on the screen. The user selects the desired topic and gives a command to translate, after which the standard phrase is translated accurately and unambiguously into a foreign language in the form of a standard phrase in the system in that language.

If the specified text contains a phrase for which there is no corresponding standard phrase in the system’s memory, then it, along with the full text that the user specifies for translation, gets into a source of reliable information, where computer linguists and translators select the standard analogue and subject for it translation and put it all in the memory of the system.

If the user sees a standard phrase on the screen, a pair phrase set from the text, but did not see the one that would correspond to the meaning of the phrase among the set, then he types the name of the desired topic and sends it to the source of reliable information, and there the corresponding standard translation of the phrase and Also, everything is laid in the memory of the system.

So it is continuously replenished, enriched and self-taught. And it will be quite suitable for working with gadgets of ordinary individual users, it is for them that it is primarily intended.

But for professional translators, it can also facilitate the work much more rationally than statistical translation systems. Here is what it will look like.

Translator gives a signal to the system: "Professional works!" After that, it launches its text, looks at the screen, selects topics for standard phrases and gives commands for translation. After receiving everything that the system was able to translate, he himself translates phrases that the system could not master. Then the final translation of the entire text is sent to the system to the source of reliable information, where it is accordingly processed and laid into the system. Then the translator, if he needs it, requires the system to translate this text into several other languages. And the system will do it literally instantly, because each sentence in the text has uniquely chosen paired standard phrases and their corresponding topics, so there is no need to “think”, just a pure search and search through databases.

If you do not really delve into it, then the question may arise: how is my proposal better than the statistical method, if the fundamental problem of perpetual pursuers behind live speech has not disappeared anywhere? Formally, it is. But I proceeded from the fact that when simple multilingual people communicate with each other, they usually do it for a short time and superficially, as temporary and casual acquaintances, and even rather hastily. They are eager to convey to each other short, accurate information with a small set of topics, and in this case my proposal will be quite efficient and in demand. Especially when people get used to working with this system. I am more than confident that they will begin to memorize standard phrases from the system with pleasure, in order not to wait for their selection if the said phrase is non-standard. Among young people, talking with standard phrases that a gadget can immediately translate into another language can become a fashion, trend, mainstream, or as they call it in their own way.

Immediately the question arises: what should be the speech basis for future standard phrases in the context-sensitive translation system? I believe that the language of standard literature in all languages ​​of the world should become the basis of standard phrases in the computerized system of contextual thematic translation. And I propose this by no means for moral or educational or aesthetic considerations, but purely practically. Classical speech is easily assimilated, perfectly understood by native speakers and quickly, accurately, tersely translated into foreign literary-classical speech. This method of machine translation is primarily intended for direct communication of multilingual people among themselves. And if it is successfully implemented, this should dramatically increase flows in all types of international tourism. Thus, the operators of the tourist business have a direct reason to help in the implementation of this method, with the most massive and uncomplicated of its segment, which will become the foundation for further and deeper development of such machine translation systems.

The same fundamental segment will have a serious military-applied significance, because the very first pocket translators appeared just in the army, more precisely, in the US Army in Iraqi territory somewhere in the 2003 year. These were primitive voice gadgets, which contain thematic sets of standard commands and phrases with voice translation into Arabic for the most simple communication with the local population, the police and the military. These conversational sets were made according to the type of phrasebooks available in tourist guidebooks, which can now be purchased before traveling to any countries. By the way !! It is the guidebook phrasebooks with their simple, but necessary for the traveler standard phrase phrases "phrase-translation", distributed by subject, so that it would be easy to find in the little book, and suggested to me the direction in which, in my opinion, it is necessary to organize and develop the system of conversational machine translation!

So ... Our army is increasingly drawn into international operations to suppress terrorism, somewhere our military performs peacekeeping functions, so they absolutely need the ability to easily communicate with local administrations and the public. Therefore, I believe that this method will be the most suitable for them, because it is fast and easy to learn, and also gets on well with the official and everyday vocabulary that the military is used to. And the military are taught such a vocabulary, brief, capacious, conveying the very essence of messages, above all the requirements of the charter, an example of the language in which it is written. So I think that when developing a context-sensitive translation system, especially at the very first stages, it is necessary to create a speech function similar to the army regulations, which would contain clear requirements and examples for developing standard phrases laid down in the system’s glossary.

Now about the technical advantages of contextual translation. First of all, it is a drastic simplification of the software. Instead of the most complicated programs of statistical analysis, search, comparison, simple programs of simple comparative search-search in databases come to the fore. And this will give, in my opinion, not only a new translation quality, but also a huge savings in computing power, along with energy savings. After all, according to M. Kovalchuk, director of the Kurchatov Institute, one simple voice request from a smartphone “consumes” energy so much that you can boil a liter of water, and a third of all electricity in the US goes to Google data centers alone !!

Morphological and syntactic analysis programs will come to the forefront from analytical programs to help personnel with sources of reliable information to coordinate all these conjugations, times, cases, punctuation marks, etc., promptly. And these programs are not so serious either. I foresee that as the contextual translation systems develop, other types of programs that are already developed and operate in machine translation will find their use, but I think that they will be adapted to several other principles, will start working more efficiently, more precisely, more economically using computational power of machine translation systems. 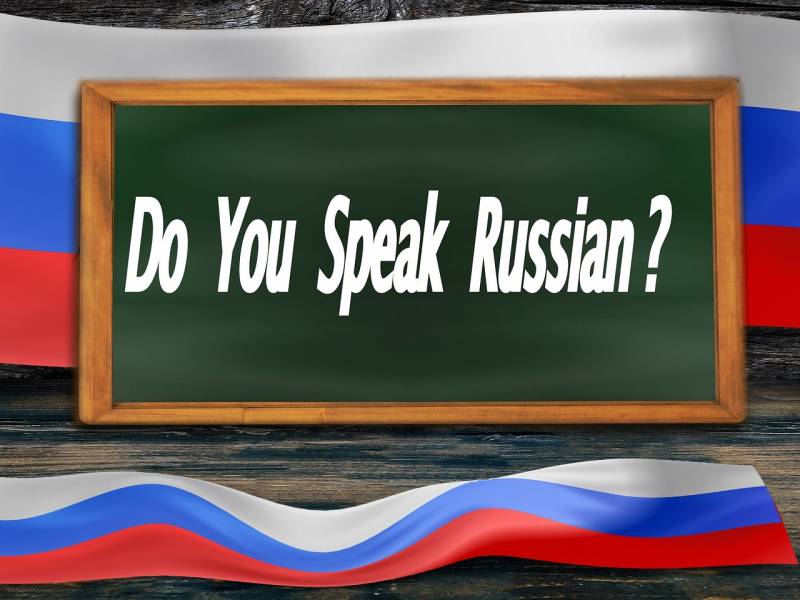 PS I want to add that within the framework of the information that is supposed to be given in patent documentation, it is simply impossible to state everything that constitutes the full essence of the invention and the methods of its implementation. Therefore, the team that will begin to implement this project in life, I can tell a lot of things that can significantly save their time, resources and, most importantly, intellectual efforts.

PPS In the comments to the previous parts of my article, it was stated that voice interpreters make the majority of mistakes at the expense of the voice recognition system of users, and if phrases are simply typed on smartphones in writing, the translation quality improves dramatically, especially in Google. Well, first of all, we were interested in the possibility of voice interpreters for communicating with our nurses and nurses with non-patients. Secondly, we used translation applications, where on the smartphone screen the phrase spoken in a voice first appears in writing, it can be read, and then given a command to voice translation. Google translate also tested, in our case, it was no better than all the others. After these tests, in our Center for Anthropometric (Orthopedic) Cosmetology and Correction, constant entertainment appeared: groups of Russian and foreign patients periodically gather together with unemployed nurses or nurses, pull out their gadgets and try to talk to foreigners with them. The laughter here is simply hysterical, especially if there are guys among our patients with good English or some other language that can explain how the phrase should have been translated and how the gadget translated it in kind. Thus, I have the opportunity to test all the systems of the current computer translation almost constantly.