29 September 2018
59
Recently, Russia announced its readiness to fully finance the construction of the Nord Stream-2 gas pipeline on its own. 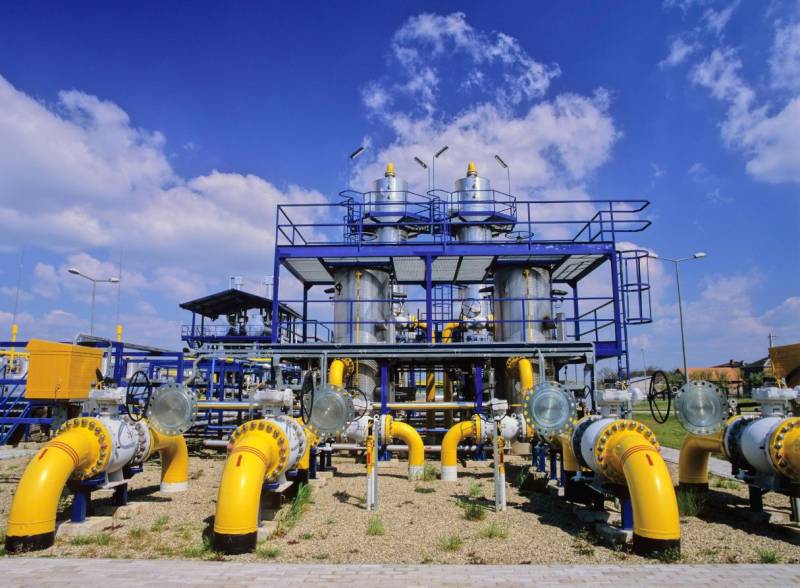 It seems that it will be necessary to build it mainly on our own. Recall that on this German-Russian project, which caused a lot of controversy even among politicians loyal to Russia, it is planned to supply another 55 billion cubic meters to Europe. m "blue" fuel. The project is estimated at 9,5 billion dollars, which was originally shared equally between Russia and its European partners.

There is no doubt that the statement voiced by Russian President Vladimir Putin during his visit to Chancellor Angela Merkel is not only a powerful PR move designed to smooth out all the rough edges and contradictions associated with the implementation of an ambitious project. Despite all the difficulties of both a political and an economic plan, this is also evidence of the certain confidence of the Russian leadership that nothing really can seriously prevent the project. 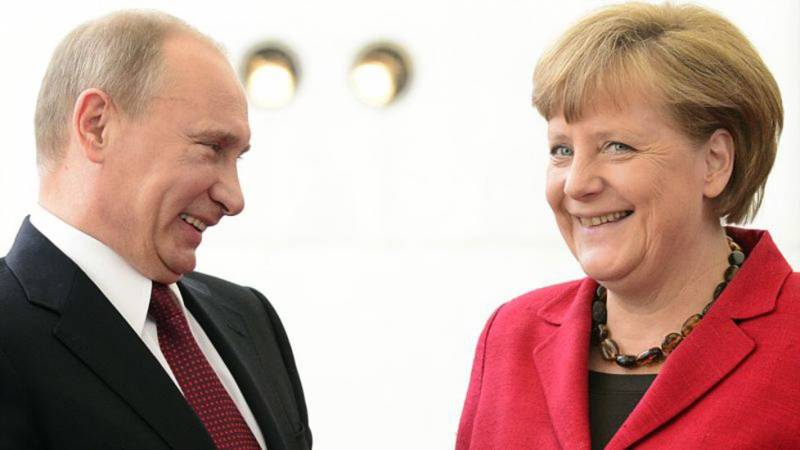 However, it is very important that this confidence does not grow into self-confidence. Yes, in favor of the purely Russian version, the suspension of the situation with American sanctions, which can be imposed not only against Russia and specifically Gazprom, but also against European participants in the project, speaks now. For now, note, for the most part, only potential ones.

But we must not forget that in the case of the implementation of the “Russian option”, European oil and gas companies face something like long-term unemployment. It is characteristic that American sanctions, among other things, are caused by fears that Russia may become a monopolist on the European energy market and will use this as a lever of pressure. It does not even take into account the fact that the implementation of the Russian scenario can contribute to the same monopolization of the market to a much greater extent than the extensive cooperation of Gazprom with the Europeans.

However, in the reality of the fact that the “Russians will pay” in Europe today, few people believe that on the old continent extremely effective antitrust laws are in effect. In addition, it should be noted that if the “Nord Stream 2” is still a project, with a fairly distant future, then building up alternative supplies of oil and gas to Western Europe is a fact today. In Germany, preparations are under way for the construction of a liquefied gas receiving terminal, to which, among other things, American fuel can be delivered.

In the meantime, the United States is quickly preparing an addition to its strategy to contain Russian gas expansion. This is the so-called ESCAPE (2018 Act) law proposed by Senators John Barasso and Corey Gardner. In it, the “Nord Stream 2” is unambiguously presented as a key target of opposition. The law, if adopted, will become the basis of the American Trans-Atlantic energy strategy for promoting American LNG (liquefied gas) and oil to the European market. 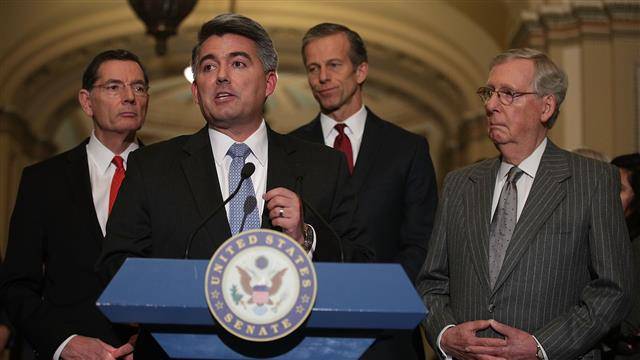 The authors of the anti-Russian ESCAPE, senators John Barasso (far right) and Corey Gardner (first left) managed to wait for their turn

Washington has repeatedly stated that so far there is little that can oppose the Nord Stream 2. This is evidenced by statistics, indicating that in 2017, through the channels of Gazpromexport, 192,2 bil- lion cubic meters penetrated to Europe. meters of gas, while LNG supplies from the United States amounted to total 2,62 billion cubic meters. m

The main buyers of US gas remain the United Kingdom, Portugal and Spain, where large volumes of Gazprom’s fuel have simply not reached. It is clear that the Nord Stream 2 is very capable of helping to solve the problem of gas supply in these countries. Moreover, American gas, despite all the efforts of the miners, remains much more expensive than Russian gas. Russian supplies to 2017 were at the average price of 200,2 thousand USD / thousand. cubic meters, while US prices were 32% higher.

In fact, the American gas industry can really master the European market either through outright dumping, which they simply don’t have enough money for, or due to any restrictions in Russian gas supplies. It seems that in Washington it was decided to take exactly the second path. However, this does not take into account the indirect funding model already adopted when financing the Nord Stream 2, which has so far allowed the European partners of Gazprom to easily circumvent the US restrictions.

After Turkey entered into an agreement with Gazprom on the second branch of the Turkish Stream, and then Bulgaria turned back to Russia, declaring the need for direct deliveries through the Black Sea, it became clear that the sanctions measures had exhausted themselves in their current version. However, a new portion of the sanctions may turn out to be much more dangerous for Europeans, and the new Russian initiative is primarily caused by this. 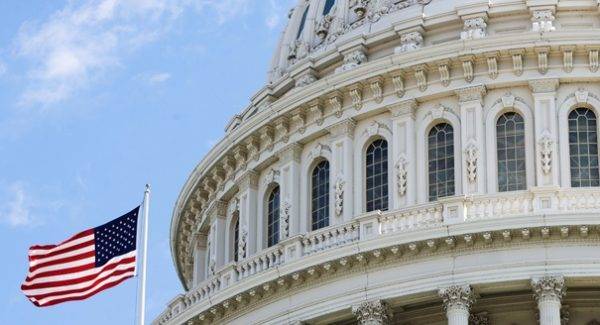 The ESCAPE bill in America is ready to link not only with the ineffectiveness of previous sanctions, but also with the unpredictability of the current owner of the White House. Especially with regard to the mechanisms and timing of the imposition of sanctions. So, even the August 2017 sanctions of the year allowed Trump to hit the European companies that had provided funding to Gazprom, but he did not. It seems that ESCAPE is capable of making the very mechanism for applying such sanctions automatic, when even the decision of the head of state is not required.

The very same package of sanctions laid down in ESCAPE, most experts estimate as less rigid compared to sanctions against the financial sector of Russia and its public debt. ESCAPE is an American document, but it is almost all about the notorious energy security of Europe. There are also familiar slogans in favor of the liberalization of energy markets, which are accompanied by a set of absolutely non-market protectionist measures that stimulate the supply of energy from the US to Europe. In addition, supporters of the bill do not hide their readiness to expand the American presence in the gas market of the old continent, relying on the military-political structure of NATO.

Most likely, it is within the framework of NATO that the Americans expect to use the support of Great Britain, Poland and the Baltic countries, which already strive to put sticks in the wheels of the Nord Stream-2. The conclusion is that the opposition to this project should somehow help the United States to strengthen discipline in the ranks of the alliance, the unity of which has recently undergone a difficult test of strength.

At least four NATO members (Germany, Turkey, Bulgaria and Greece) are not going to abandon the rate on Russian gas to ensure their own energy security. For Germany, which has practically curtailed its nuclear energy, the problem is especially acute. 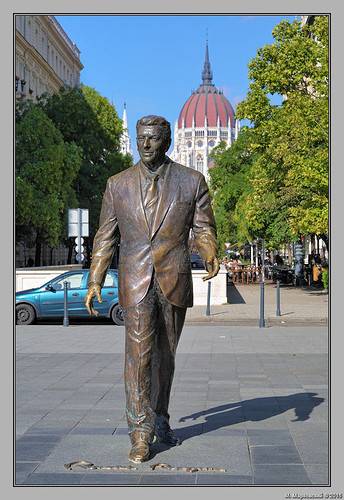 Monuments to President Reagan managed to arrange in Eastern Europe (in the photo - Budapest), and even in the former Soviet republics

One day, more than 30 years ago, this country, which had not yet had time to add the eastern part, managed to withstand the pressure of President Ronald Reagan himself, now widely recognized in America as “great.” Reagan tried to force Europe, and first of all Germany, to abandon gas from the USSR, proposing to rely on the development of the Norwegian field with the characteristic name "Troll". However, practical Europeans, assessing the project as excessively costly, did not go to meet him.

It remains to be noted that the ESCAPE bill does not say anything concrete either regarding the criteria for energy security or about the mechanisms for promoting American oil and gas to the same Europe. Most likely, this is planned to be laid in a more global document - the above-mentioned Transatlantic Energy Strategy. By the very same ESCAPE project, American lawmakers once again seek to untie their hands in non-market competition, and not so much to American business, as to themselves and the president.