The fleet may need another "Ivan Gren" 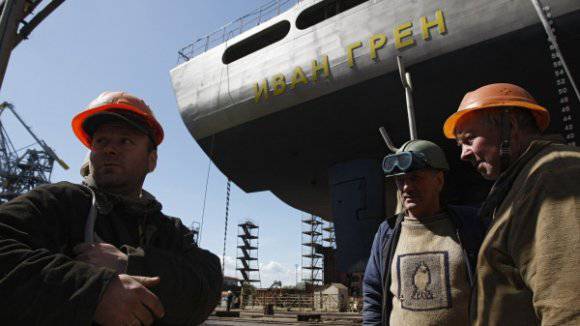 Large landing ship "Ivan Gren", built by order of the Ministry of Defense of the Russian Federation at the Baltic shipyard "Yantar" in Kaliningrad

The twin brother of the large landing ship (BDK) "Ivan Gren", launched last week in Kaliningrad, is planned to be built by order of the naval fleet. As a high-ranking source in the Navy’s commander-in-chief told Izvestia, it’s now being decided in what configuration the ship will be ordered to shipbuilders.

- The fate of the project 11711 will be decided after the construction of the second BDK. That is, we are planning to order the second such ship, and then we will decide whether to build ships of this type further, - explained the representative of the Navy.

He explained that "Ivan Gren" is intended for the landing of troops directly on the shore. To do this, the BDK "sits" stranded with the bow and opens the huge "gate" in the nose. This method is very good for deserted shores, but is meaningless under the fire of enemy coastal troops.

Other types of amphibious assault ships land with the help of boats or helicopters, such as the French Mistral. Obviously, the Russian Navy, purchasing the Mistrali, will focus on this method of landing, which is also called “over-the-horizon” - the ship can land landing outside the line of sight from the coast, while the BDK needs to be stuck in the coast.

On the other hand, BDK does not require additional amphibious means, due to which it has a greater payload. Now in the Russian Navy about 20 BDK. Two of them in August 2008 participated in the seizure of the Georgian port of Poti.

In the United Shipbuilding Company (USC), Izvestia was informed that it has not yet made any documentary decisions on the construction of the second BDK Navy.

- The Kaliningrad shipbuilding plant “Yantar”, on which the “Ivan Gren” is built, is, of course, ready to begin construction even tomorrow. But the fleet must decide on the appearance of the second ship, so the project of the first one has changed three times, - the Izvestia interlocutor explained.

According to him, initially “Ivan Gren”, designed in 1998, was supposed to possess powerful weapons, including air defense systems. In 2004, the ship began to build on this concept.

However, already in the 2006 year, after the change of leadership of the Navy, it was decided to get rid of most of the weapons of Ivan the Gren. As a result, the BDK turned into a lightly-armed transport worker “with amphibious potential.” In this form, the ship was launched on May 18 2012 in Kaliningrad.

- We had to cut the ship's hull, destroy the premises where the air defense systems were to be located. Now the fleet is unlikely to want to leave this project in this form, - explained the representative of USC.

According to him, if the fleet does not provide Yantar with a technical assignment in the near future, the second ship of this project may not get into the state defense order of the year 2013, which must be signed as early as October of the year 2012. In this case, the laying of the ship will take place only in 2014 year.

In addition, according to the Izvestia interlocutor, many of the weapons and control systems designed for Ivan Gren in 1998 have already been taken out of production and now the designers will have to implement new systems for this project.

- A lot of things are simply not available - diesel engines, pumps, turbines, artillery systems. Something is very outdated - for example, electronics. Now many components have completely different dimensions, characteristics, cost, so the fleet will have to develop a new technical project anyway, the source said.

Konstantin Sivkov, First Vice-President of the Academy of Geopolitical Problems, explained that the fleet, in the form in which the Ivan Grena was launched, does not need a second ship.

- It is necessary to build a full-fledged ship, so that it will have both air defense systems, and powerful attack components, and the ability to throw out and protect the landing force. And “Ivan Gren” can be sent to civilian shipping, the expert said.

According to Sivkov, the ships of this project are much more necessary to the fleet than the Mistrali, but due to the fact that the fleet still does not have a single strategy and understanding of which ships and for what it needs, the 11711 project can be ignored.

Displacement BDK "Ivan Gren" is 5 thousand tons, speed - 18 nodes. The length of the ship is 120 m, the width is 16,5 m, the draft is 3,6 m. The crew size is 100 people. The 76,2-millimeter cannon, two six-barreled 30-millimeter anti-aircraft installations, two launchers of the RZSO “Grad” and the Ka-29 transport and combat helicopter are in service.