The victory of Western intelligence services: the Grand split in the Orthodox world

10 September 2018
354
Ukraine is on the verge of a new war, in comparison with which even the current civil war may seem to be “flowers”, despite thousands and thousands of its victims. This is a truly serious danger of a religious war. And this danger is connected with the actual willingness of the Constantinople patriarch to recognize the so-called autocephaly of the UOC of the Kiev Patriarchate. Behind the intricacies of the relationship between various Orthodox conglomerates, when decisions are made in private, there is a great danger not only for Ukrainian believers, but also for the whole of world Orthodoxy, which actually turned out to be an abyss of schism.


The essence of the matter is that literally a few days after the "fraternal" meeting with the Patriarch of Moscow and All Russia, Kirill, the Patriarch of Constantinople Bartholomew decides to send his representatives (exarchs) from the United States and Canada to Kiev. In fact, they will attempt to legitimize the UOC of the Kiev Patriarchate, which was previously unrecognizable in the Orthodox world, headed by Filaret (Denisenko). 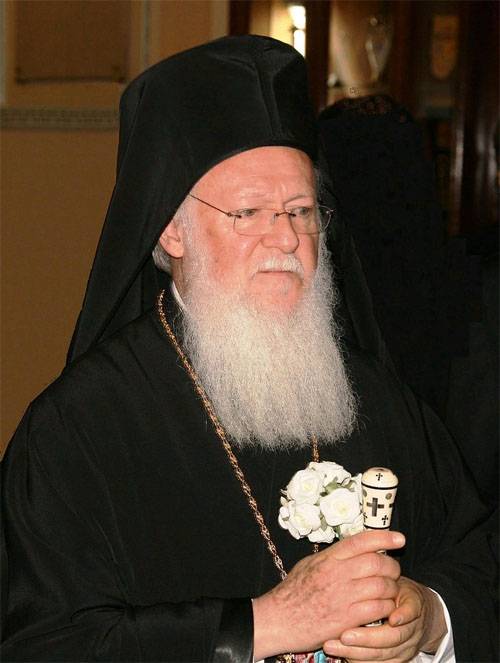 In the Russian Orthodox Church they say directly that a war has been declared in Constantinople throughout world Orthodoxy, since Bartholomew “usurped the right of primacy of honor”, ​​deciding that he is free to make decisions for all Orthodox Christians. It should be noted here that in Orthodoxy there is no “earthly leader”, and Jesus Christ is considered the head of the church - therefore all decisions are made at the councils with the invitation of the heads of all the churches. Bartholomew decided to try on the "clothes" of the so-called "Eastern Pope".

From the statement of the head of the Department for External Church Relations of the Patriarch of Moscow and All Russia, Metropolitan Hilarion of Volokolamsk (TK "Russia24)":
The Patriarchate of Constantinople, thus, now openly embarked on the warpath. And this war is not only against the Russian Church, not only against the Ukrainian Orthodox people. This war, in essence, is against the unity of all world Orthodoxy.

Experts point out that a real war can begin in Ukraine not only for the minds of Ukrainians, but also for church property. And in this war earlier radicals have already manifested themselves, which carry out a frank seizure of temples.

It must be stated that sometimes it is the wars on religious grounds in stories civilizations became the most protracted and brought rivers of blood.

Western “partners”, for whom the security services are clearly behind, amid the latest events are clearly ready to accept congratulations from interested persons on the largest-scale schism in the entire history of Orthodoxy. Many compare this schism with the schism of the Christian church into Orthodox and Catholic (it was in the XI century).

Today in Orthodoxy there are about 300 million believers, of which the largest number of representatives are in Russia and other countries of the former Soviet Union. In this regard, it is quite clear who is directed against the decision to bring a split into the vast Orthodox world.