Trump is "immoral" and "unstable." Impeachment from anonymous

10 September 2018
23
The attack in the US media on President Donald Trump does not stop, political pressure continues unabated. An unprecedented blow to Trump for America is dealt by The New York Times by publishing an article by an anonymous high-ranking White House official. This incognito publicly states that in the presidential administration there is a group of people who “work hard” against Trump’s policies, supposedly “for the good of America”. Or a group of conspirators who sabotage the policies of the president? 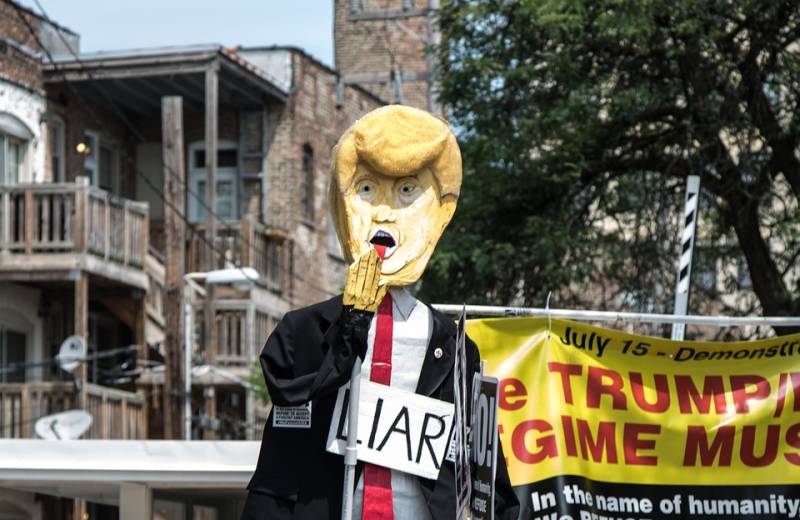 "Unselected bureaucrats of the" deep state "go against the will of the voters, promoting their secret plans," - trump attacks Trump from the podium in Montana, the American heartland. The publication of this article, Trump calls the "extremely unfair decision of the NYT" and encourages the newspaper to disclose the name of an anonymous author.

It seems that spying begins in the USA.

Who is this mysterious official in the Trump administration? Rand Paul, a Republican senator and Trump supporter, suggests checking the White House for a lie detector. Among the suspects, Secretary of Defense James Mattis, Vice President Mike Pence and others. However, the conspirator may not exist, he may be, in turn, someone's fake, invented to legalize stuffing about the existence of opposition to Trump in his administration, according to a number of experts. One thing is clear: the media attack on President Trump is intensifying.

September 11, on a momentous and tragic date for the United States, will be published in defiantly offensive book by the famous investigative journalist Robert Woodward. Trump in the White House. Based on an interview with Trump himself and again anonymous sources, Woodward argues in the book that Trump is crazy and incompetent. "He flew off the coils!" He is an idiot, ”the words about Trump are reported in the book about the alleged White House employee John Kelly. The latter disowned these words, but they are in the book, and there are many other similar ones.

Robert Woodward is a journalist with a name, and also an extremely liberal-minded ideological leader of globalists; therefore, this is not only an attempt to discredit Trump, but also a political gesture. Woodward is one of the authors of the Watergate investigative journalism, as a result of which President Richard Nixon had to leave his post ahead of schedule, and he is clearly trying to repeat his former success on Donald Trump.

According to many political analysts, the plan of the conspirators is simple: win the upcoming November 6 election to the United States Congress and declare an impeachment to President Donald Trump. According to the 25 Amendment to the US Constitution, if the vice president and the majority of the cabinet find the president incapable of fulfilling their duties, they can initiate a case of impeaching the president, and Congress will vote.

True, Trump does not think to give up, brands Woodward and fake media, starting with CNN and NYT, and claims scandalous criticism that after six years they will forget about fake media, and he will remain in stories. Trump hints that he will run for a second term!

Can conspirators under public leadership, perhaps Woodward, impede Trump? Given that Trump is going to run for a second term, in spite of hinting about it again, this scenario seems to be more and more likely.

What will trump impeachment or impeachment lead to? Obviously, the acute crisis. How it will be resolved, we will see the results of the elections to the Congress 6 November. “If Trump is declared an impeachment, the people will revolt,” says New York’s ex-mayor Rudolph Giuliani. But more importantly, how will the army and special services behave. The army, perhaps, will support Trump, it seems to be not against “getting along with Russia” with Trump, but the special services are clearly against Trump in their majority.

Trump may once again be tempted by the “small victorious war” on the eve of the congressional elections, in order to strengthen his domestic political positions by shooting “Tomahawks” on Syria, as he already did. But Russia doesn’t recommend doing this and demonstratively conducts exercises in the VKS and Navy in Syria.

What is happening with President Trump and around Trump suggests that the systemic crisis in America is intensifying, since the public administration of Western “democracy” occurs through the media and other mass media, and they are discredited in the fight against Trump.