Russia's strategic plan and deployment of troops on the eve of the 1812 war of the year. Part of 2

23 May 2012
2
As already noted, despite the abundance of various projects, Emperor Alexander I did not consider it necessary even to inform army commanders about them. Bagration and Tormasov were in the dark about the plans of the emperor. This was even known to Napoleon Bonaparte, who informed Lieutenant-General Alexander Dmitrievich Balashov (he was sent by Alexander immediately after the start of the war to Napoleon with a letter containing a proposal to return to the pre-war status quo) in Vilna: “You cannot conduct military operations by military councils. All wars like this were unhappy. At 2- 3 I have a good thought like a flash of thought, in a quarter of an hour it is transmitted in the form of an order, in half an hour it is being carried out by advanced posts, and you (Russians) while Armfeld suggests, Bennigsen thinks, Barclay de Tolly - argues, Pfuh - objects, but collectively they do nothing, but only time is wasted. ”

As a result of the uncertainty and secrecy that prevailed in the Main Apartment, Bagration, Tormasov and Chichagov believed that the Russian army would conduct an offensive war as a whole, and not a defensive one. And the public opinion of the Russian Empire, accustomed to decades of brilliant victories of the Russian army, thought that the troops would wage an offensive war. In addition, some nobles feared that the French emperor would try to win the sympathies of the serf peasantry of Russia, starting a series of progressive reforms that he carried out in Europe. Governors received strict instructions not to arm the peasants.

St. Petersburg was still considered the most dangerous area. It was best prepared for war. On the Western Dvina were the fortifications of Riga, Dinaburg and Drissa. In this direction, military roads were built and a material and food base was created: three main stores - in Dinaburg, Driss, Disna, and two consumable stores - Shavli, Koltykian. Kiev direction was also well prepared. It was closed swamps Polesia. Military roads, Kiev fortifications, army shops were prepared. The main store was located in Kiev, and the subsidiary in Lutsk, Dubno, Ostrog, Zaslavl, Staro-Konstantinov, Zhytomyr, Slutsk, Pinsk and Mazyr.

The worst was prepared by the Moscow direction, which became the main one. It was closed by two rivers - the Berezina and the Dnieper and two fortresses - in Bobruisk and Smolensk. In addition, in Borisov created bridgehead. The main store was located in Borisov, and auxiliary warehouses in Grodno, Vilna and Slonim.

The main apartment and almost all the developers of military plans were mistaken in the forces and means possessed by the French emperor. Although the Russian agents who were in European yards, reported fairly accurate data on the forces of the enemy. Thus, the Russian ambassador to France, Alexander Kurakin, said that Napoleon had gathered enormous forces, the number of which reached 500 thousand. The Russian military diplomatic agent in Paris, Alexander Chernyshov, reported that the emperor Napoleon Bonaparte has at his disposal only French troops 300 thousand people, besides he is subject to the forces of the Rhine Union and other allied contingents. Similar information came from the Austrian and Prussian capitals.

According to the Russian Ministry of War on the 1 1810 October, Napoleon had in Europe: 181 infantry regiment, separate battalion 102 and 122 company, cavalry regiments 99, 17 4 individual squadrons and companies, 15 artillery regiments, battalions and separate 48 235 mouth. On 1 November, according to the ministry, France had 1 million 46 thousand people in the armed forces (of which up to 400 thousand in Spain). On 1 April 1812, the number of French troops was determined at 1,2 million. True, in Petersburg it was believed that for the war with Russia, Napoleon could use no more than 200-250 from such a large number of troops, thousand soldiers and officers. So thought Barclay de Tolly and Pfuhl. Bagration also believed that the enemy would have no more than 200 thousand soldiers. According to General Karl Tol, the forces of the French army should not have exceeded 220 thousand people. Bennigsen defined the enemy's army in approximately 170 thousand people. And the Swedish ruler suggested that Napoleon would hit Russia with 150-thousand. army.

As a result, a significant miscalculation in the forces and means of the enemy made all the assumptions and plans of the Main Apartment erroneous.

The location and composition of the troops

In February 1812, all troops assembled at the western border were divided into two armies. In early May, they received orders to advance to the border and settle down more concentrated. The first army occupied the front from Rossien to Lida in 200 km. It consisted of the 1 Infantry Corps under the command of Lieutenant General P.H. Wittgenstein - it was located at the Kaidana. It consisted of two infantry divisions - 5-I and 14-I, 1-I cavalry division, three Cossack regiments. The 2 Infantry Corps, under the command of Lieutenant General KF Baggovut, stood at Orzhishki. It consisted of 4-I and 17-I infantry divisions, Elizavetgrad hussars. The 3 th infantry corps of Lieutenant General N. A. Tuchkova was located at the New Troc. It consisted of the 1-I Grenadier Division, the 3-I Infantry Division, the Life Guard Cossack Regiment, the 1 Teptyarsky Regiment. The 4 Infantry Corps of Lt. Gen. P. A. Shuvalov was stationed at Olkenik. It included the 11-I and 23-I infantry divisions, Izyumsky hussars. The 5 Infantry Corps, commanded by Tsarevich Konstantin Pavlovich, stood at Sventsyan. It consisted of a Guards Infantry Division and the 1-I Cuirassier Division. The 6 th infantry corps of the General of Infantry D. S. Dokhturov was located at Lida. It included the 7-I and 24-I infantry divisions, Sumy Hussars. It was the first echelon of the 1 of the Western Army of M. B. Barclay de Tolly. In the second echelon there were three cavalry and one Cossack corps. The 1 reserve cavalry corps (consisting of two brigades), Lieutenant General F. P. Uvarov, was stationed at Vilkomir. The 2 reserve cavalry corps (two brigades), Lieutenant General FK Korf, was stationed at Smorgoni. The 3 Reserve Cavalry Corps (two brigades) under the command of Major General P.P. Palen - at Libiada. The Cossack corps general from the cavalry MI Platov was pushed to Grodno. Total army had 130 thousand bayonets and sabers with 550 guns. The army headquarters was located in Vilna.

The 2-I Western army under the command of P. I. Bagration occupied positions from Lida to Volkovysk with a length of 100 km. The 7 th infantry corps of Lieutenant General N. N. Rajewski became at the New Yard. In its composition were 26-I and 12-I infantry divisions, Ahtyrsky hussars. The 8 Infantry Corps of Lieutenant General M. M. Borozdin was stationed at Volkovysk. It consisted of the 2-I Grenadier Division and the 2-I Cuirassier Division. The 4 Cavalry Corps (two brigades) of Major General K. C. Sivers was located at Zelow. Cossack detachment N. I. Ilovaisky - from Bialystok. The 27 Infantry Division under the command of D. P. Neverovsky (it was formed in Moscow) was on the march and united with the 2 army in Novogrudok after the start of the war (July 3 1812). The 2-45 Thousands of bayonets and sabers with 50 guns were in the 270 of the Western Army. The army headquarters was located in Pruzhany.

The 3-I Western Army (reserve), commanded by A. P. Tormasov, was located in the Lutsk area. The Kamensky Corps (commanded by General of Infantry S. M. Kamensky) included the 18 Infantry Division and the Pavlograd Hussars. The Markov Corps (led by Lieutenant-General EI Markov) consisted of the 15 and 9 th infantry divisions of the Alexandria Hussars. The Osten-Sacken Corps (commander was Lieutenant-General F.V. Osten-Sacken) had the 11 Cavalry Division, three infantry brigades from various infantry divisions. The Lambert Cavalry Corps (commanded by Major General K. O. Lambert) as part of the 5 and 8 Cavalry Division. There were about 45 thousand people in the army with 168 guns. The army headquarters was located in Lutsk. 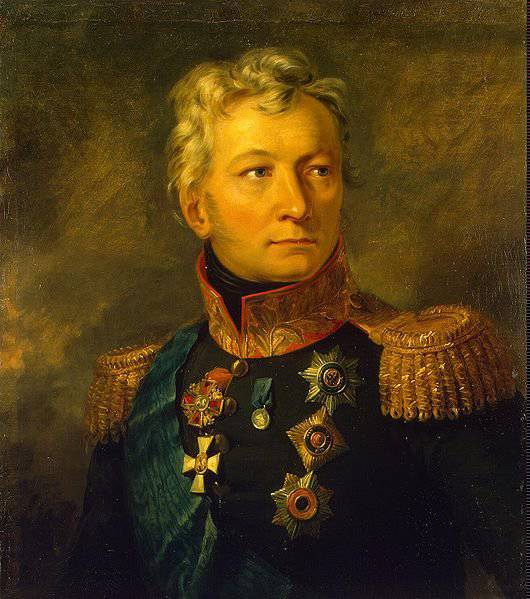 In addition, there were two reserve corps: the 1, under the command of E. I. Meller-Zakomelsky, was stationed at Taranza and the 2 of FF Ertel, at Mazyr. In the area of ​​Riga there was a separate building of I. N. Essen (up to 18 thousand people). All in all, up to 220-225 thousand people and about 1 thousand guns were concentrated on the western border of Russia. It was not the whole army of Russia. Petersburg was forced to keep significant forces in other directions. So, against the Ottoman Empire was the Danube army of Admiral P.V. Chichagov (55 thousand people, 202 guns). In Finland, the corps of the Russian general F. F. Steingel (19 thousand, 102 guns) was located; in September it would be transferred to the Riga area.

The location of the Russian troops indicated that Petersburg did not know Napoleon’s plans and the direction of the main attack, trying to cover all directions. Nor were the data of the Russian agents in Western Europe on the strength of the French emperor's meaning. The isolated position of the armies created the danger of defeating each of them separately. Given the power of Napoleon’s Great Army, the early deployment of armies and their advancement to the border was not advisable. Moreover, this arrangement of the troops did not correspond to the adopted defensive plan. For a defensive war, it was advisable to place the troops farther from the border, pushing forward reconnaissance Cossack and cavalry units. The invasion of Napoleon’s troops revealed the main thrust of the enemy’s forces and would allow without haste (when it was not necessary to retreat, having the enemy behind, losing troops in rearguard battles, exhausting them with marches) to develop retaliatory measures. Advancing the enemy stretched his communications, detached from rear bases.

Therefore, the most experienced commanders Bagration and Bennigsen opposed such an arrangement of troops. They suggested, if the Russian troops were already deployed and focused (that is, they could conduct offensive operations), to use their position for a preemptive strike. At least carry out private operations against the isolated corps of Nei and Rainier. Alexander rejected these proposals. Barclay de Tolly believed that it was too late to move away from the western borders, since this would negatively affect the morale of the troops and the mood of the population. True, he did not object to the regrouping of the second army. Bagration pulled the troops to Volkovysk. From the front, he covered himself with Cossack units and a cavalry brigade of I. V. Vasilchikov.

As positive moments, it is necessary to note the speed of mobilization of the Russian army, the moral and material readiness of the troops for war. The army had a high morale, well-trained and battle-hardened officer corps, good artillery, and considerable material reserves.