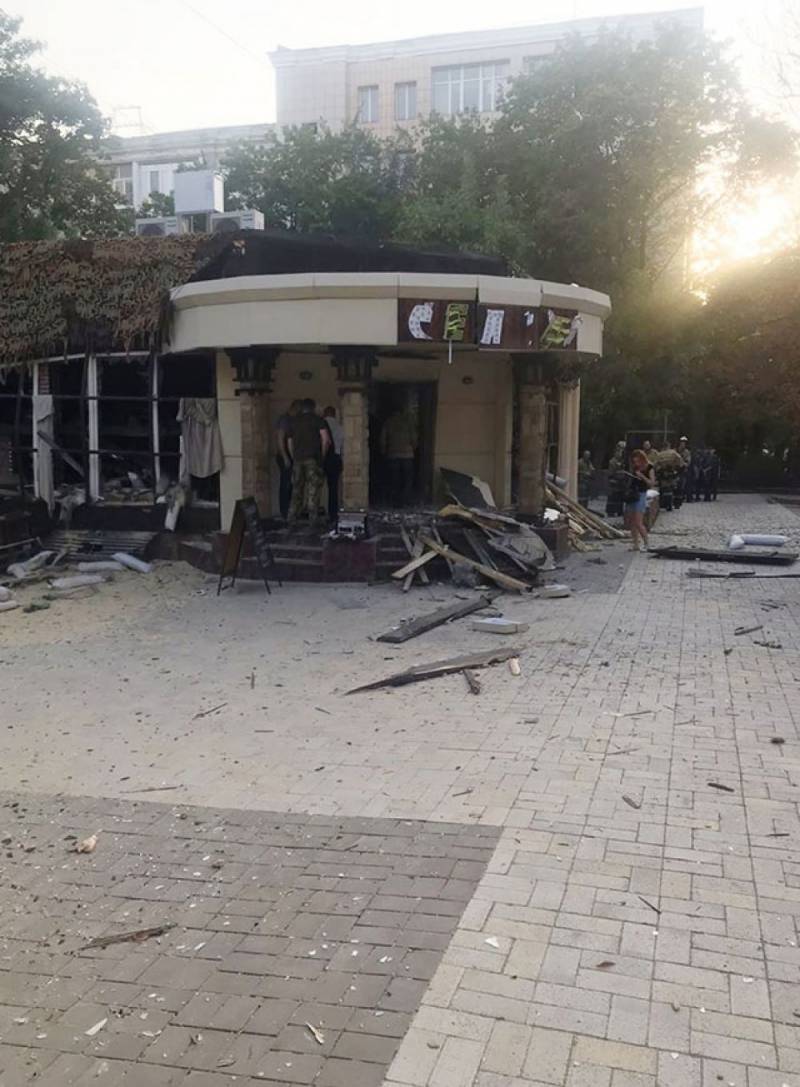 The resonant murder of Alexander Zakharchenko, which occurred in Donetsk, caused a strong reaction in certain circles of the DPR and Russia. I don’t even want to talk about Ukraine. There, these certain circles turn inside out for joy.

So, what is known for today.

Zakharchenko was mortally wounded in the restaurant "Separ" during a memorial dinner in memory of Joseph Kobzon. The guard of the head of the republic died on the spot. Zakharchenko himself died in hospital from head injuries incompatible with life. 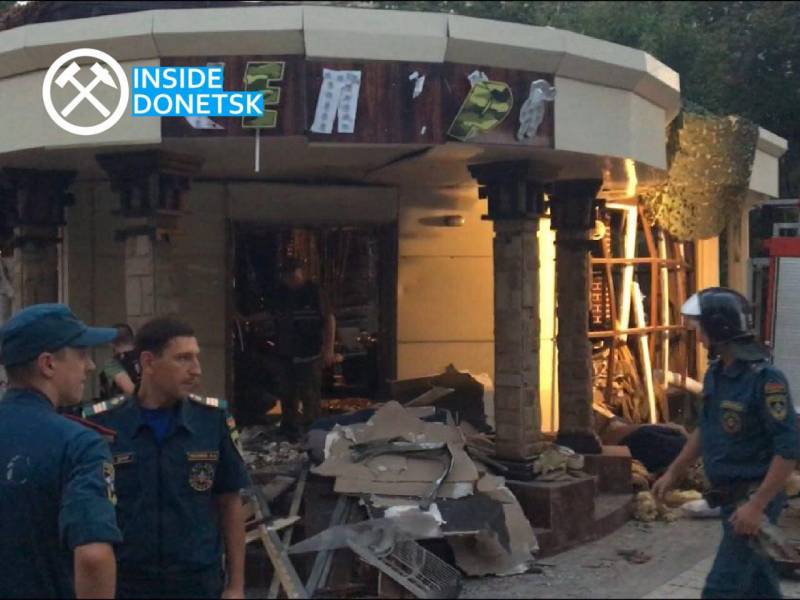 In addition to Alexander Zakharchenko and his security guard, six more restaurant visitors died, including one child. Total hit 11 people. But, quite possibly, the list of victims is not complete.

Among the victims there are two significant political figures for the republic - the head of the Ministry of Finance of the DPR, the vice-premier Alexander Timofeev (call sign “Tashkent”), the organizer of the event and the head of the youth wing of the local Oplota, Natalya Volkova.

The explosion occurred around 17-30. Judging by the destruction and fire, the power of the explosive device was not less than 800 grams in TNT equivalent. 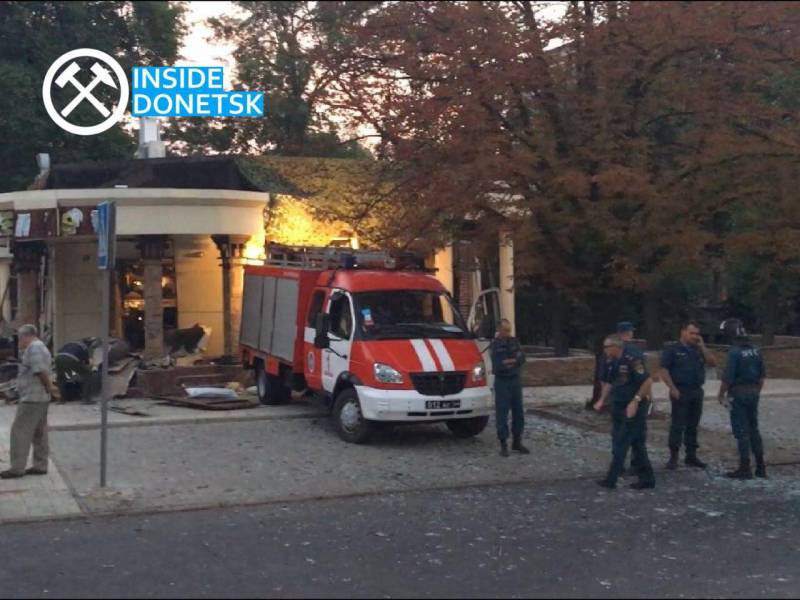 The technical details of the attack, and there is no doubt about this, will not be known soon. And not really, they are important. Is there a result. So the goal is achieved. Therefore, today it is worth talking about something else. About the premises and causes of this crime.

To say that Zakharchenko badly guarded, it is impossible. One of the authors personally met with Alexander and is well aware that the guards were well organized. "Batu" took care. But...

With full confidence today we can say that the traitor or traitors who leaked the "secret" information about the location of Zakharchenko at a specific time and place in the Ukrainian specialists, are in the "near circle".

In fact, everything is more prosaic. Perhaps some are distracted by some pretentiousness: “Head of the Republic”, “Ministry of State Security”, “Deputy Prime Minister” and so on.

It is probably worth it to descend from heaven to earth, and to understand that in the "republic" an area of ​​half of the Donetsk region, and with the population even less, for such an operation it is not necessary to particularly strain.

The organization of the assassination of the head of the semi-region will not require such tricks as it seems at first glance. Especially when it comes to the former Ukrainian territory. Half the case, wrest territory from Ukraine. The second is to snatch Ukraine from the heads of the inhabitants of the territory.

This, in fact, as a statement of the facts of many murders, which by no means could not do without help "on the ground".
It is clear that in all cases "their own" helped. It is very difficult to imagine that an absolutely left body could enter and shove a mine into a lamp. And knowing the way of life and the psychology of Ukrainian brains, it is generally unrealistic to imagine the appearance in the cafe, located under the hand of the head of security Zakharchenko, “aliens from that side”.

Well, only in the case that with the guts bought by the head of security.

And in our case, a waiter, an electrician or a night guard is enough to turn things around.

By the way, one of the guards has not yet been found. Disappeared somewhere. But these are arguments in favor of the poor.

In any case, Alexander Zakharchenko is no more, most likely, there is no longer “Tashkent”, which Zakharchenko frankly protected, but the point is not that.

The bottom line is that, in principle, all the structures of the DPR have long needed a thorough cleaning. And, according to our information, this cleaning was to begin as soon as possible. Zakharchenko was not listed, his figure suited absolutely all levels. On 146%.

"Tashkent" is a completely different alignment. This gentleman had already become the talk of the town, and if we were told that they had put mine on Timofeyev, it would not have caused surprise.

Another question, who was asleep and in a dream saw Timofeev smeared on the wall, would hardly have started to grab Zakharchenko with him.

Really, if it is not gentlemen from Kiev. This is the more the better.

Thus, the question arises about the purpose of the attack.

The classic “intimidate the citizens of the DPR” looks like a rather pale and frank foolishness. There, who is intimidated - has long been a citizen of Russia and lives in Perm or Rostov. Just destroy Zakharchenko as a person? Also doubtful. Although, it is these versions that will be most actively exaggerated in the media.

Showdown between your own? More interesting, but there is a nuance. We repeat that Zakharchenko arranged ours in all respects. I wouldn’t have arranged it - they would have organized a "fly-fly" in the style of the Carpenter.

Spin Markets Zakharchenko family - well, by local standards tidbit. But the markets for Zakharchenko's wife are open, and anyone who wants to buy cheaper or get a gift for free will definitely run into questions from the relevant people from the relevant authorities. With a question like "you almost goat, Kemu parish decided to give?".

Most of all in a situation, Kiev definitely wins in general and Poroshenko in particular. Why? Let's imagine further developments.

Donbass scared? Ready to give up? Ridiculous. Intimidate those who are already at war more than grandfathers in the Patriotic War? No, not serious somehow. Everybody wanted to spit there for a long time on all these Minsk agreements and all the talk of "big politicians" about peace and friendship, about the forgiveness of deaths, about the need to preserve unity ...

The second nuance. For several years now, the press has used the common phrase that Kiev does not want to talk directly with the Donbas. Today, there is probably no politician who did not say something like that. And let me ask you, will Donbass want to talk to Kiev after this murder? But in Kiev, they also understand this.

Moreover, Poroshenko is clearly looking forward to the start of a big war. As the most radical part of the Ukrainian, and indeed, to be honest, Russian society.

In any case, today we can speak directly about the undermining of the Minsk agreements. This is a complete failure of the diplomacy of appeasement. And here it’s not even the death of one of the signatories. The thing is, it will start tomorrow.

Political and legal aspect: Zakharchenko was the leader of the unrecognized territory, a separatist, a terrorist and so on according to the version of Kiev and the rest of the world with a few exceptions. However, he was a figure voted by real people.

Any other person who will represent the DPR, even if in Minsk, it is ... like, to formulate it ... a less legitimate figure.

So - the election, anyway. Not the best time for a political show, but nowhere to go. Fortunately, there are people in the DPR who can still (not Pushilin) ​​become the successors of the work of Alexander Zakharchenko.

And here is the nuance again. Elections are not according to the Ukrainian scenario and legislation, which are voiced by the same Minsk ones - an additional trump card for Kiev.

The fact that the situation as an order plays on Kiev is clear and understandable. The only question is in what form Kiev will realize the obtained advantage, military or financial. But this is a topic for another discussion.