Scientists exposed the "violating the laws of physics" rocket engine

18 May 2018
89
Representatives of scientific circles of the Dresden Technical University conducted research on the engine EmDrive, which, according to its developers, acts on the principle of "violating the laws of physics."


On the essence of the developers' statement: a conical resonator chamber with a magnetron that generates electromagnetic waves “is capable of transforming these waves into cravings.” It is stated that if you select the “correct” geometry of the truncated cone of the engine, the system will start moving towards its narrow part due to the presence of microwaves within the entire system. In this case, the developers added each time that this contradicts the laws of physics, namely, the law of conservation of momentum, since there is no fuel consumption and there is no generation of a directional beam of waves.

The engine, as stated, when bringing to "technical excellence", can be used in space programs.

Dresden scientists decided to study the EmDrive system in detail and finally concluded that there are no violations of the laws of physics during the operation of the engine for the simple reason that, in fact, there is no work itself.

The effect of thrust arises, but, firstly, it is critically minimal, and secondly, its cause is not the EmDrive itself, but the interaction of the magnetic fields created by the current running along the cables with the Earth’s magnetic field. 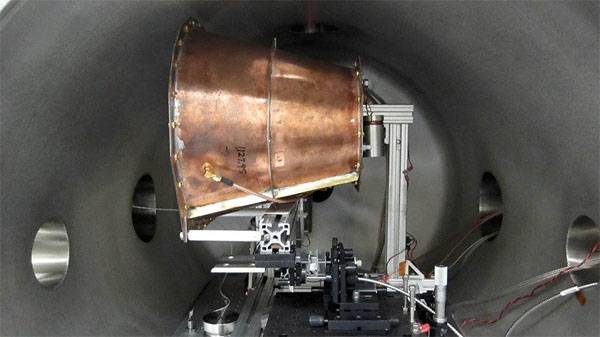 From the material:
Despite the fact that we used as many twisted or coaxial cables as possible, some magnetic fields eventually leak through our cables and connectors. Considering the strength of the magnetic field of the Earth 48 μT with a slope of 70 ° in central Europe, several centimeters of cables and a current of 2A (similar to what is required to power the amplifier), we get the appearance of the Lorentz force, similar to our observed values ​​of "thrust". Therefore, we suspect that the interaction of the power supply for the amplifier with the Earth’s magnetic field masked any real movement that could be below our observed value. In the next installation, we expand our experimental unit so that the configuration of the cavity and the amplifier can be completely shielded with sheets of metal in order to significantly reduce this effect. (...) After our improvement of settings, we will try the dielectric disk configuration, various geometries, as well as higher power levels.

As a result, experiments have led to the fact that the EmDrive design does not represent any breakthrough in physics.

The assumption that this rocket engine in reality does not break anything or does not work was expressed as early as last autumn by US scientist Bryce Cassenty:
EmDrive's work violates Newton's third law, which says that force cannot arise by itself without the interaction of physical bodies. Both action and opposition are the direct result of the work of the law of conservation of momentum. If this law is violated, then all modern physics built on its basis will be wrong. Therefore, many of us believe that all the statements about the work of EmDrive are the product of erroneous measurements.

Research results confirmed this hypothesis. However, this does not reduce the interest of specialists and "fans" to the engine configuration.