14 May 2018
25
At the airport in Kshesinakh near Poznan on May 14, the NATO exercises Tiger Meet began. At the same time, only NATO formations (from the air force) are allowed to take part in NATO maneuvers, which have on their chevron the mascothen of this doctrine - a feline predator. Almost over 60-year history squadron exercises are held for the first time on the Polish base, reports "Polish Radio" 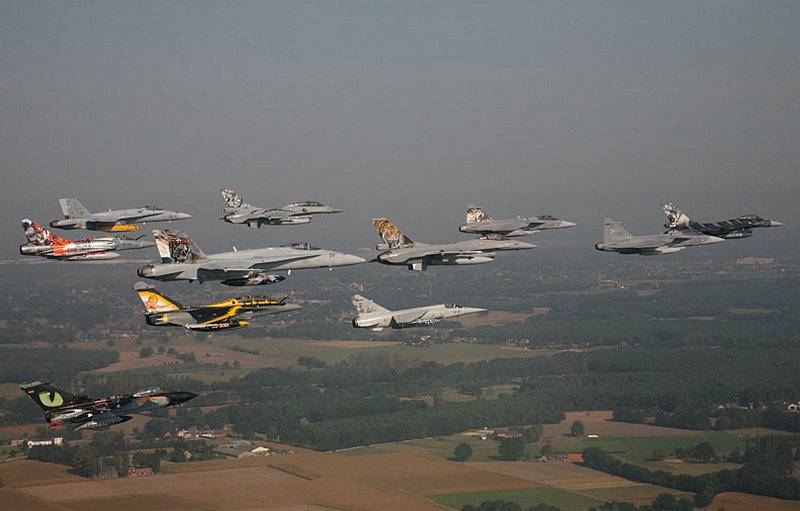 In Poland, it is noted that the meetings of "tiger" squadrons are the most prestigious aerial exercises. 19 air groups arrived in Poznan for these exercises, including from Italy, Spain, the Czech Republic, the Netherlands, Germany and the United Kingdom. The Poles also take part in the exercise - 6-I air squadron from Kshesin.

Gripen airplanes from the Czech Republic, as well as F16 fighters from the Netherlands and F18 from Switzerland will fly into the sky over Poznan. In addition to airplanes, helicopters that are also related to tiger squadrons take part in the exercises.

The first meeting of the "tigers" occurred in 1961, at Woodbridge Air Force Base in the UK, with the participation of three squadrons from the 74 Squadron of the Royal Air Force, 79 Tactical Fighter Squadron of the US Air Force in Europe and the EU-1 / 12X Squadron of the EU-1962 / XNUMX On the sides of the aircraft was a tiger emblem. The meeting of the pilots was successful, and the Tiger Mit trainings were held annually. And already from the next XNUMX of the year, “pokatushki” acquired the official status of NATO exercises.