14 May 2018
42
In the Amur Region, the All-Army stages of the contests "Tank biathlon ”and“ Suvorov onslaught ”, the strongest crews will represent Russia at the ARMY-2018, reports RIA News. 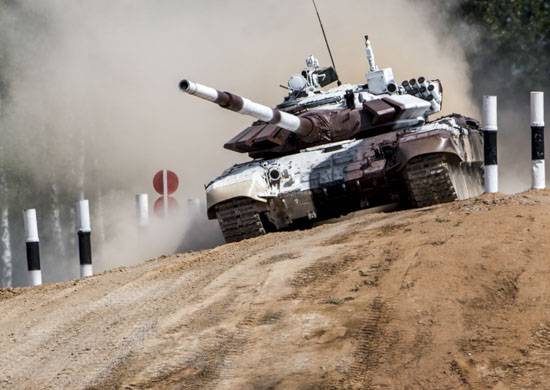 According to the representative of the BBO, “at the training ground of the Far Eastern Higher Combined Arms Command School (FEFU) near Blagoveshchensk, the strongest teams of the military districts of Russia, Northern fleet and specialized military schools. "

The teams will perform on their vehicles - T-72BZ tanks (in the "Tank Biathlon") and BMP-2 (in the "Suvorov Onslaught"). DVOKU traditionally prepared a team for the competition "Suvorovsky onslaught", the school will present the crew for the "Tank Biathlon" for the first time. Among the infantry crews of the BMP-2, the DVOK team repeatedly became the winner and represented Russia at international competitions of the past years,
he told reporters.

The representative of the district explained that “at the DVOKO training ground, a modern track with obstacles was prepared, and the conditions for its passage in both competitions are similar: tankers will have to complete three rounds; after each they will execute firing at the targets denoting a tank, helicopter, infantry fighting vehicles and a hand-held anti-tank grenade launcher. "

The Grenat-4 UAV operators will transmit target coordinates to adjust the fire of tank crews from closed positions.

“In the“ Suvorov onslaught ”, as the trail passes, participants are waited by a slalom (“ snake ”), a ford, a kurgan, a track bridge and an escarpment. Crews of combat vehicles on firing lines will hit targets imitating infantry fighting vehicles, a helicopter, and an anti-tank grenade launcher using standard weapons, ”the press service said.

Competitions will be held in Russia, Belarus, Kazakhstan, Azerbaijan, China and Iran. Participants from 80 countries are invited.

Ctrl Enter
Noticed oshЫbku Highlight text and press. Ctrl + Enter
We are
President of the Federation of Tank Biathlon A.N. Stolyarov: “The creators of World of Tanks are going the right way”
Military Reviewin Yandex News
Military Reviewin Google News
42 comments
Information
Dear reader, to leave comments on the publication, you must sign in.