13 May 2018
33
All attempts to rewrite history Great Victory, erase it from the memory of the people, inevitably doomed to failure, reports RIA News statement of the Ministry of Foreign Affairs of Russia. 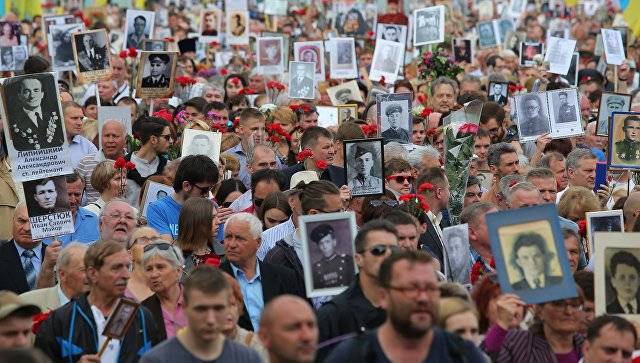 The Ukrainian authorities, who are in a Russophobic frenzy, continue the policy of historical revisionism, deliberately distorting the country's latest chronicle in their own nationalistic way. Special significance in Kiev is attached to the rewriting of the events of the Great Patriotic War of 1941-1945, the colossal historical legacy of which is the "bone in the throat" for the current political figures of Ukraine. This year, the Ukrainian leadership once again tried to give an anti-Russian tone to the celebration of Victory Day, turning the meaning of the great 9 date of May for our people inside out,
the commentary says.

The Foreign Ministry stressed that “the perverted interpretation of the results of the Great Patriotic War, the unrestrained praise of the Nazi henchmen, the memory of the accomplices of the fascists from the Ukrainian Insurgent Army, in essence, is nothing but a mockery of the memory of the people of Ukraine, who suffered huge losses in the fight against plague "".

However, "the campaign to discredit Victory Day failed", 9 of May "thousands of Ukrainians took part in commemorative events and laid wreaths and flowers at the monuments and memorials."

It is becoming more and more obvious that the nationalist "vaccination" to the people of Ukraine, whose dose the Kiev authorities are constantly trying to increase, is no longer valid. We are convinced that all their attempts to rewrite the history of the Great Victory, erase it from people's memory, are inevitably doomed to failure,
stressed in the Ministry of Foreign Affairs.