14 May 2018
54
The action "Immortal regiment" gathered more than ten million participants this year. And this is only in Russia! But there were, albeit smaller in scale, stocks in European countries, the USA, Canada and even in Ukraine. The latter, you see, in itself eloquently indicates that the cries for the support of officials, “repayment, state interest and engagement” are no more than an attempt to spit on an armored train passing by. This action, this impulse is so necessary for people, so unite them in something good, good, good, that they are ready, as it turns out, to enter it not thanks to, but in spite of the authorities, the atrocities of the Nazi provocateurs and the threat to get on the “unreliable” lists with all the consequences. 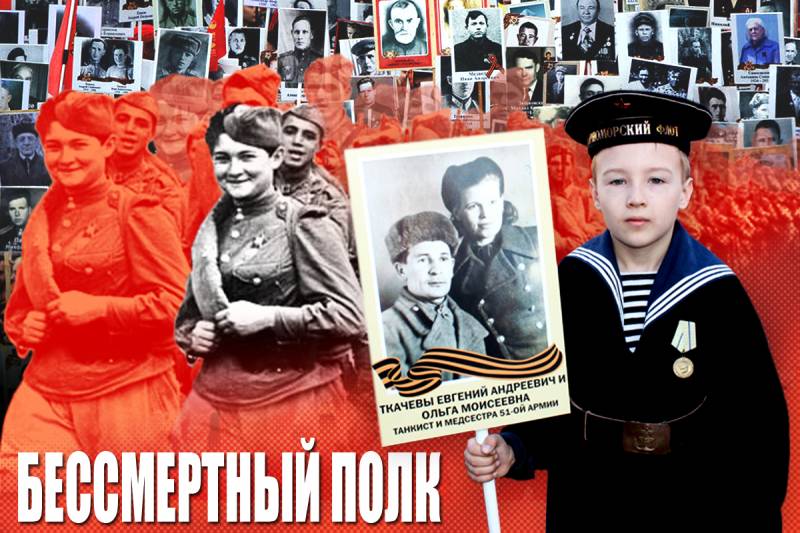 In general, I do not really understand the meaning of all these “revelations”. “Aha,” voluntary adherents of freedom and democratic elections shout out to us, “and the government allocates money, creates conditions, and twists the picture on all television channels!” The procession, then, is unreal !!! ”

No, dear whistleblowers, the present. And the support of the authorities here is not only permissible, but also desirable. And moreover, to her, this very power, there would have been a lot of questions if she had ignored such a powerful public impulse, had withdrawn herself, had let it run its course. And the matter is not how much the action could “unwind” itself, without benevolent media attention and support at all levels. No, everything is much more serious - thus the state shows that, despite all the contradictions, in the main, it is still with its people.

And these “revelations” look quite doubtful against the background of the fact that the whistleblowers themselves without a good grant or salary from the Russian state (and how many of them are fed by the presidential administration, through all sorts of human rights councils, etc.) are mostly Twitter will not write. But we will probably leave the conversation about Vladimir Vladimirovich’s personal serpentarium to another time - now we have, nevertheless, a slightly different reason ...

In general, all these cries of “victory”, photos of young children dressed in the form of Red Army men, invariably accompanied by sarcastic comments, are nasty malice about the labels and names of various goods on the shelves of our stores from helplessness and understanding of their defeat. And then, one may doubt whether it is ethical to use the winning theme for commercial purposes. But you need to understand that this is a clear, obvious evidence that the idea of ​​Victory as a nation that unites the beginning really really mastered the masses. And merchants, whose instincts for such things can be compared with the shepherd's scent, unwittingly, and work for the common cause, and serve as a genuine marker, indicating the deepest penetration of ideas into virtually all strata of society.

And this, I will not hide, well. Even despite the dubious ethical component ...

Getting acquainted with history the movement "Immortal regiment", you understand that it could not have been otherwise. It turns out that in different years similar or similar attempts were made to honor the memory of their fathers, grandfathers and great-grandfathers. The earliest known action took place back in the distant 1965 year, when students of one of the Novosibirsk schools marched through the streets with portraits of veterans. And there were others: in the Russian cities, and in the Ukrainian then Sevastopol, and even in Jerusalem. But each time something was missing - maybe that same benevolent attention of television, that very state support.

But one day it happened. What was dissolved in the air, in the minds of our people, suddenly found a foothold and crystallized into this beautiful, so sincere and sincere action.

And it doesn’t matter who exactly started exactly that successful attempt. Although their names are known, and if desired, you can easily find the names of several Perm journalists, who once not only invented their march, but were able to successfully arrange it, giving a great name, organizational form, etc. Their merit is great, we must pay tribute to them, and yet ...

Still, nothing would have happened if the parents did not sew military uniforms to their young children. If hundreds of thousands, and then millions, did not go to the procession of the "Immortal Regiment", in one hand holding the portrait of his grandfather, and the other leading his child.

And it’s wrong to think that the “Immortal Regiment” is only our tribute to those who did not return from battle or could not live to this day. No, it is our duty to the children, who otherwise could be left alone with the fighters for the right to forget everything, to betray everything, to exchange everything for full consumption and to watch another Hollywood film, in which American soldiers again save the world from the Nazi plague.