How the Allies divided Germany after World War II

10 May 2018
20
The defeat of Germany in World War II immediately raised the question of the future fate of this state. By the time of the signing of the Act of the unconditional surrender of Germany, the country's territory was occupied by Soviet, American, British and French troops. Virtually all of Germany’s economic infrastructure was destroyed, and there were no government organizations or governance structures after losing the war. Naturally, the Allies faced a very difficult task - not only to eliminate any possible manifestations of resistance from the "ideological" Nazis, but also to completely reorganize the future life of the country. 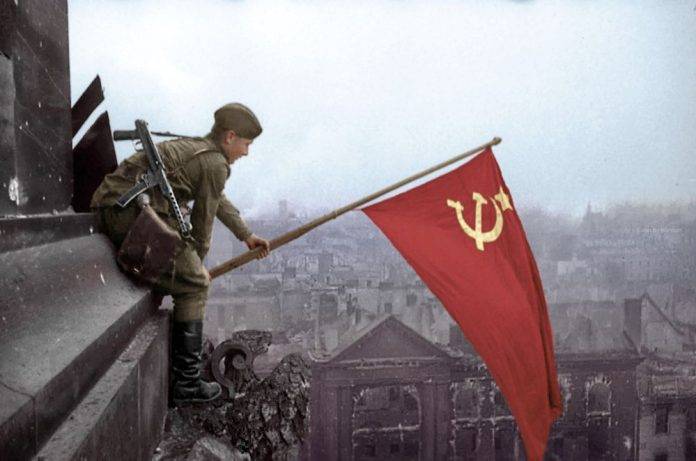 The question of what to do with Germany in the event of its defeat, was discussed by the allies long before victory in the war. At the Tehran Conference, which took place from November 28 to December 1 1943, the question was raised whether to divide post-war Germany. Franklin Roosevelt proposed the creation of five autonomous states instead of a united Germany, Winston Churchill also spoke in favor of partitioning Germany, stressing the need for Bavaria, Baden, and Württemberg to separate from Germany. Churchill proposed to include these territories along with Austria and Hungary into a separate Danube confederation. Stalin opposed the division of Germany. His words that even if Germany were divided, nothing would prevent it from later uniting, turned out to be prophetic. September 12 1944 in London signed a protocol on the creation of three occupation zones - the east, north-west and south-west. Berlin was to be divided into three occupation zones after the victory.

From 4 to 11 in February 1945, when it was already clear that the victory over Nazi Germany was approaching, the Yalta Conference was held, at which it was decided to single out the fourth occupation zone - the French one. Although the contribution of France to the victory over Germany cannot be compared with the contribution of Great Britain and the USA, not to mention the contribution of the Soviet Union, Winston Churchill insisted on the allocation of the French occupation zone. He explained that, sooner or later, France would still have to make efforts to contain possible aggression from Germany if it revived, since France has a large common border with Germany and long-standing experience of negative interaction with this country. Stalin opposed the allocation of the French occupation zone and the involvement of France in the control of post-war Germany, however, despite the position of the Soviet side, Britain still managed to push its line. 1 May 1945, a week before the surrender of Germany, France was also included in the control mechanism. 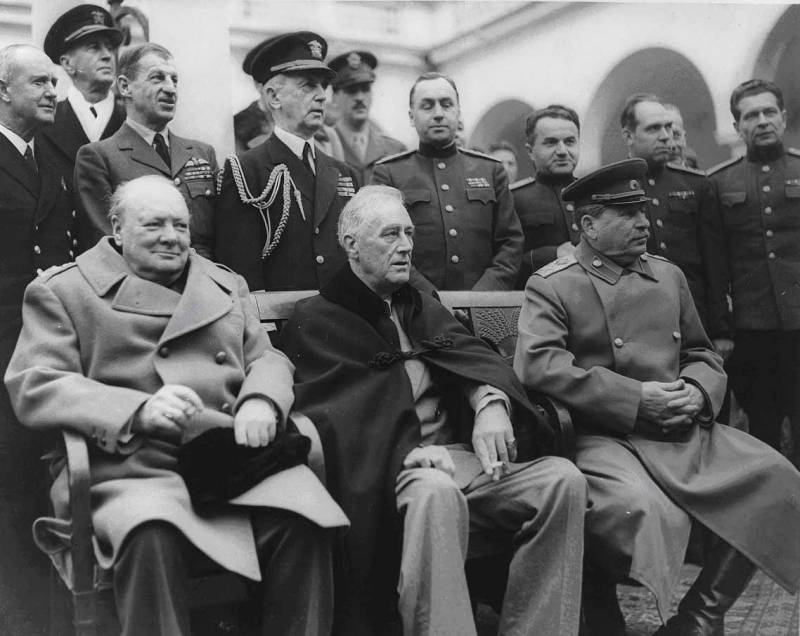 5 June The 1945 Declaration was signed in Berlin on the defeat of Germany and the assumption of supreme power over Germany by the governments of the Union of Soviet Socialist Republics, the United Kingdom and the United States of America and the provisional government of the French Republic. From the Soviet Union, the declaration was signed by Marshal of the Soviet Union Georgy Zhukov, from the USA by Army General Dwight David Eisenhower, from Great Britain by Field Marshal Bernard Lou Montgomery, from France by Army General Jean-Marie de Latre de Tassigny. The declaration emphasized that since in Germany at the time of its signing there was no central government or forces capable of taking responsibility for governing the country, meeting the requirements of the victorious powers and maintaining order, the allied governments of the USSR and the USA assume the supreme power in Germany, Britain and the interim government of France. At the same time, it was agreed that this decision was not the annexation of Germany. That is, initially it was a question of the joint management of Germany as a temporary measure, which sooner or later will be canceled. 6 June 1945 of the USSR, USA, Great Britain and France officially divided the territory of Germany into four zones of occupation. 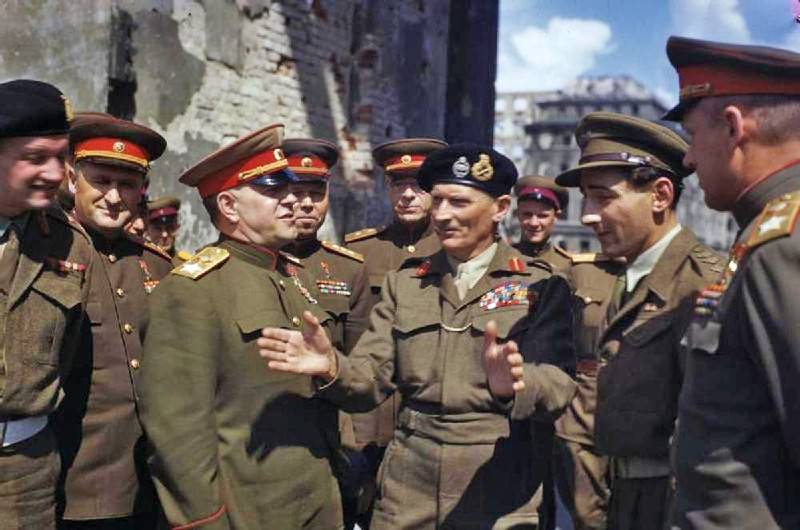 One of the main tasks of the Soviet military administration was the organization of the German forces proper, which could assist the Red Army and, in the future, form the basis of the pro-Soviet German government. To this end, prominent leaders of the communist and anti-fascist movement began to arrive in Germany from the USSR. Back in April, 1945, before the capitulation of Germany, the “Ulbricht group” arrived from Moscow - German communists led by Walter Ulbricht. 10 June 1945, the commander of the SWAG Marshal Zhukov, by his order, allowed the activities of non-fascist political parties in the Soviet occupation zone, after which the Communist Party of Germany (KPD) and the Social Democratic Party of Germany (SPD) were re-established and 21 of April 1946 united into the Socialist Unity Party of Germany (SED). In the summer of 1946, the SED began preparations for elections to local and state authorities.

North-West Germany, Britain traditionally considered the sphere of their interests. Lower Saxony, North Rhine-Westphalia, Schleswig-Holstein and Hamburg entered the British occupation zone. The headquarters of the British military administration was located in the city of Bad Heinhausen. The governing bodies were created - the Control Commission for Germany, headed by the British military governor and the Zonal Advisory Council, which included representatives of civil administrations and political parties operating in the British occupation zone.

Bavaria, Hesse, North Baden and North Württemberg entered the southwestern or American zone of occupation. The US military administration was also headed by a military governor. As part of the occupation zone, three lands were allocated - Groß-Hessen, Württemberg-Baden and Bavaria, civilian Land Councils and Parliamentary Council were created, despite the fact that only the American military command still had full power.

The Western or French occupation zone included the Saar region, South Baden and South Württemberg, the southern part of the Rhineland, two districts of Hesse and four districts of Hesse-Nassau, Lindau region. Unlike the British and American commanders, the French command abandoned the idea of ​​creating a single German civilian control body in the territories under its control. In the future, part of the occupied territories, according to the provisional government of France, was to join France, the Saar region would integrate into the French financial and economic system, and a federal state was created in Württemberg. Of all the powers, France was most of all interested in the dismemberment and weakening of Germany, since history repeatedly fought with Germany and these wars usually ended badly for France. General Charles de Gaulle, in October 1945, even stated that he hoped that France would never see a strong Germany again.

Already in 1946, relations between yesterday’s allies began to deteriorate rapidly. The Soviet Union stopped food supplies to the Western occupation zones, after which the United Kingdom and the United States decided to unite their occupation zones into a single Bizoniya. Joint administrations were created, which were faced with the main task of improving the economy and normalizing living conditions in the territories occupied by the American and British forces.

One of the main tasks that both the British and American military administrations set for themselves was to preserve the industrial and especially military-industrial potential of the “old” Germany, which the allies sought to use for their own purposes, namely, for the future confrontation of the Soviet expansion in Europe. Therefore, in the British and American occupation zones, only in one 1947 year were there hidden from consideration about 450 military factories. They were to form the backbone of the future military industry in West Germany.

France for quite a long time did not join the joint Anglo-American project to unite the occupation zones. Only 3 June 1948, France decided to unite the western occupation zone with Bizonia, as a result of which Trizonia was created. Britain and the United States managed to “bribe” France with the promise of creating a collective governing body of the Ruhr region without the involvement of the Soviet Union. Britain, the United States and France, creating Trizonia, agreed with the Marshall Plan and the further economic modernization of Germany under the control of the Western powers. At the same time, the Saar region, for which France had particular views, remained under the French protectorate for almost 10 years, until 1957. September 7 The Federal Republic of Germany was established on the basis of Trizonium 1949. In the history of post-war Europe, a new page was turned, on which the occupation zones were to become sovereign states.

In the Soviet zone of occupation, a denazification policy was actively pursued right up to 1948, under which the local administrative apparatus was cleared of former Nazi Party activists, as well as potential opponents of the Soviet Union, including representatives of bourgeois political parties. The creation of the Federal Republic of Germany by the Soviet Union was negatively received. The lands that were part of the Soviet occupation zone did not recognize the formation and constitution of the Federal Republic of Germany, after which 15 - 16 of May 1949 passed elections of delegates of the German National Congress. 30 May 1949 The German People’s Congress adopted the Constitution of the German Democratic Republic. The GDR included five lands under the control of the Soviet military administration - Saxony, Saxony-Anhalt, Thuringia, Mecklenburg and Brandenburg. Thus, the second German independent state was created, which, unlike Germany, was under the ideological, political and military control of the Soviet Union.

Thus, in reality, the division of Germany was carried out rather on the initiative of the Western powers, who were very afraid of the coming to power in post-war Germany of the left forces and turning it into a friendly country to the Soviet Union. It was Joseph Stalin who, at the Tehran Conference, showed himself to be a consistent opponent of the dismemberment of Germany into independent states, and in the 1945 year, after victory, stated that the Soviet Union was not going to dismember or destroy Germany. Only when the West openly went to the creation of a new German state in its occupation zones, the Soviet Union had no choice but to support the creation of the German Democratic Republic.

For more than forty years in place of Germany, two independent states were formed, one of which belonged to the Western bloc and the other to the socialist camp. Germany has become one of the key military and political allies of the United States in Europe and the foundation of NATO. The treacherous policy of the Soviet leadership at the turn of 1980-1990-s, in turn, led to the fact that the GDR ceased to exist, becoming part of the Federal Republic of Germany, but the West did not fulfill its promises - Germany remained in NATO, on its territory American bases and troops remained, it still plays a crucial role in the US anti-Russian military strategy in Europe.

Ctrl Enter
Noticed oshЫbku Highlight text and press. Ctrl + Enter
We are
Chernobyl notebook. Part of 3Diplomats of the People's Commissariat of Defense: on the eve and during the war
Military Reviewin Yandex News
Military Reviewin Google News
20 comments
Information
Dear reader, to leave comments on the publication, you must sign in.