The future of Russia - Medvedev is

10 May 2018
178
Putin is a strong leader. This is recognized by foreign experts. But is Putin Russia strong? No, weak. In anticipation of the emergence of a “new” government, which in the era of the Kremlin's personnel shortage will be headed by the irremovable Comrade. Medvedev, this is especially noticeable. Paradox? And no again! Putin is strong in politics abroad, analysts admit, but inside Russia he is a reflection of the oligarchic economy model, his strickenness inhibiting growth in the country. 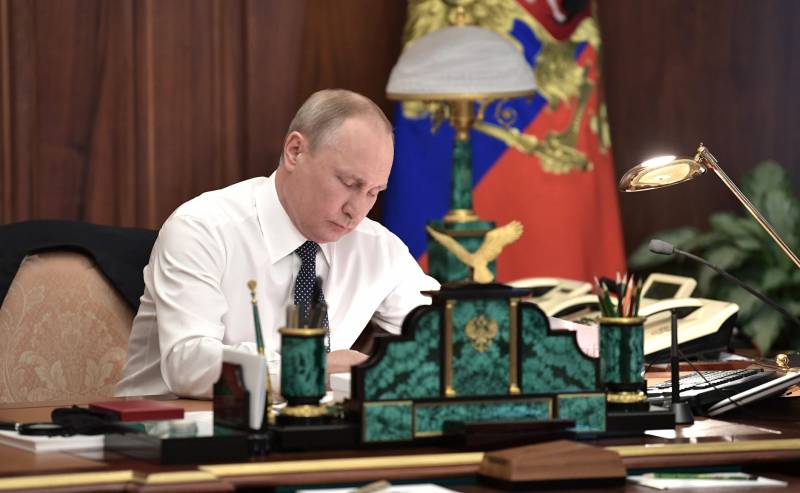 The foreign press is full of analytical materials on Russia's domestic policy, Putin’s fourth presidential term and the “new” Russian government, which will lead permanent Dmitry Medvedev to a bright Russian future.

Let me remind you, V. Putin signed decree on the appointment of Medvedev as prime minister.

Earlier, the candidacy of Medvedev was supported by the deputy 374 (the absolute majority), and Vladimir Zhirinovsky even saidthat Medvedev is “the most experienced official” in Russia.

The appointment of Medvedev, I note, was a great disappointment for those patriotic citizens who for some reason hoped that Putin would send the chairman of the government to eternal resignation, and even send to the Far East - to master naked hectares and give personal example to lazy people. Distressed and disappointed citizens, I recommend reading Benedict Spinoza, who did not live to live in hope, and in general declared a state of hope an affect.

Moscow’s continuation of the course of "stability" has become a pretext for the irony of foreign experts and journalists from the West and the East, from the USA to India. The castling in the Russian government is painfully amusing!

“Vladimir Putin v4.0” or “Vlad” (“Vlad”), although referred to in other materials as strongman, is immediately exposed as an extremely weak internal politician who is following the course of oligarchic capitalism.

The image of a "strong leader" and "macho," notes "The Times of India", helped Putin throughout his long reign. Putin successfully projected himself as a strong leader who could return to Russia its “former glory”. “The image of a macho” became “a balsam for the souls of all those who have experienced insane grief from the collapse of the Soviet Union.” Putin "played muscles in the international arena in recent years: he tore off the Crimea from Ukraine, used military force in Syria." All this is the projection of a strong Russia. But in the meantime, Putin’s “home” reputation has faded ...

The Russian economy is barely recovering from the recession that began in the 2014 year. The country's economy is heavily dependent on oil and gas. The development dynamics is falling, despite the fact that Russia “possesses enviable human resources, as well as many natural resources”.

“It looks like,” the publication concludes, “Putin accepted the political economy of the oligarchy, which suppressed growth.”

Putin "surprised" many when he declared an "internal focus" in his future policy, writes Fred Weir in the Christian Science Monitor (an opinion is given on the publication on Yahoo).

Having opened his “fourth official term as a Russian president,” Vladimir Putin “struck many” by voicing the “first in Russia” program: a constant focus on internal development.

The money for internal development will be partly taken from the “military”: a sharp reduction in defense spending has been planned. Such statements, the author notes, disagree with Western ideas about Russia's global intentions.

The priorities listed in the new Kremlin strategic program are probably based on Putin’s desire to strengthen his own historical Legacy: The image of the ruler who revived the country.

A projected increase in spending on roads, education and health will have to really pay, notes the publication. And the key source of this funding will be the military budget, which previously, during most of the Putin era, grew up by about 10% each year.

“The time when the external threat was used to reduce social spending has gone. We can no longer continue this way, ”says Pavel Zolotaryov, deputy director of the Institute for US and Canadian Studies, which is part of the Russian Academy of Sciences.

By special decree, Putin ordered the new government to draw up a detailed plan for October 1. The priority is social goals, the very ones that many Russian people share. In the list of tasks: an increase in real incomes, an increase in pensions, an improvement in housing conditions, a reduction in poverty, and an increase in people's access to quality medical care. In addition, Putin called for planning investments in high-tech and export-oriented industries.

Recent public opinion polls, the analyst notes further, show that the “shift in Putin’s priorities” coincided with the “military fatigue of the Russians.” The Russian people are still "indulging their president, because he supported the status of a great power." However, according to a survey by Levada Center, 45 percent of respondents point out Putin’s mistakes and blame him for “the inability to ensure a fair distribution of income in the interests of ordinary people.” In March, 2015, this figure was 39 percent, that is, over the 3 year, there was a noticeable increase in the number of dissatisfied with Putin’s domestic policies.

Another poll, conducted by the state agency VTsIOM, confirmed: the personal approval rating of Putin’s population is high, as always: 82%. Paradoxically, at the same time, almost 90 percent (!) Of respondents said that the country needed some reforms.

Analysts believe that another “dimension” may open up: a new approach to Putin’s inner development will emerge. It is likely that efforts will be made to develop corrupt relations with the West. “There is no doubt that Putin wants to improve relations. His liberal advisers tell him that restoring economic growth requires both easing sanctions and better access to Western finance and technology, ”said Alexei Mukhin, head of the independent Center for Political Information in Moscow.

However, it is easy to say, but difficult to do ... And who will do it?

Medvedev. The same one in the foreign media with a grin called “Loyal prime minister in the shadow of Putin” (“loyal PM in Putin’s shadow”). 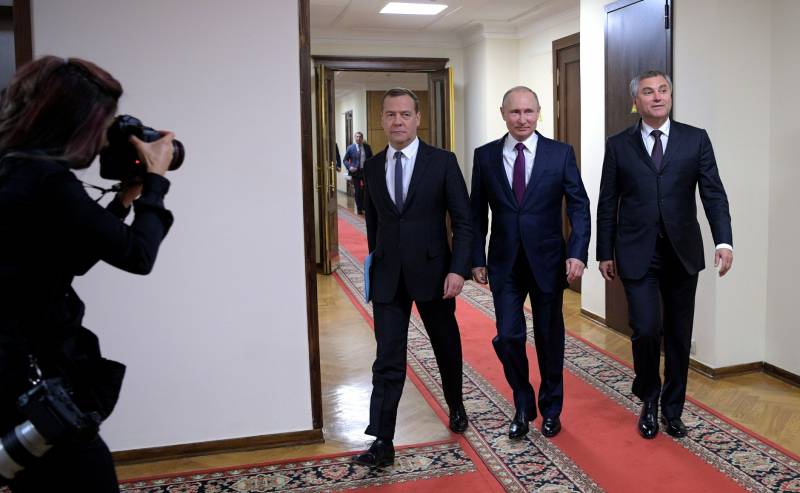 At one time, Medvedev, being the president of the Russian Federation, tried to start a modernization campaign to bring the country out of the “post-Soviet stagnation,” writes Anna Malpas (AFP). However, Medvedev could not “escape the shadow of his dominant mentor.”

Recently, the Russian press reported that Medvedev may leave his post. But Putin chose "continuity", the author notes with irony.

As for Medvedev, he remained "resolutely devoted to his mentor."

Medvedev, the correspondent reminds, was born in 1965, in Putin’s hometown, Leningrad, in a family of teachers, learned to be a lawyer, and then worked in the mayoralty for five years (this was under Putin, in 1990-1995). His entire political career was conducted under the authority of a “former KGB agent”. Putin received his protege in Moscow back in 1999 year. “Anointed successor” Medvedev won the presidential election in 2008 and, by the very first legal act, appointed Putin to the post of prime minister.

Medvedev in those years believed that the Russian economy was at a "dead end" and required urgent reforms, if only the country wants to move forward. In one of his speeches, he even seemed to compare himself with the reformer Alexander II. “We are trying to change our economy and change our political system,” the journalist quotes him. - In essence, we are continuing the political course that was established 150 years ago. Freedom cannot be put off until tomorrow. ”

But, as the “cynics” noted, these words meant little: after all, Putin was still dominant in Russia.

So what has the “reformer” achieved at the presidential post?

Unlike Putin, Medvedev sought to promote a friendly image of Russia in the West and advocated a “reset” in relations with the United States.

However, he sent troops to the territory of Georgia in 2008 year.

In an effort to leave a personal historical "legacy" in Russia, Medvedev ordered the construction of a technological hub for the modernization in Skolkovo near Moscow. (No comments.)

He also became famous for his love of the iPad (a souvenir from visiting Silicon Valley), Twitter, Instagram and Facebook. Putin is definitely not a competitor to him.

It is this person from Instagram (by the way, he has 2,9 million subscribers), armed with an ipad and aware of Skolkovo innovations, will be responsible for the modernization initiated by Putin.

As prime minister, writes Washington PostD. Medvedev will be responsible for implementing the “ambitious development plan for Russia, which Putin published after his inauguration.”

The plan provides for intensifying efforts to diversify the Russian economy, which depends heavily on oil and gas exports, by strengthening the technology sector and expanding exports of agricultural products.

The president set the following task for the prime minister: Russia must become one of the five leading countries of the world by 2024 (the end of Putin’s last presidential term).

American readers are ridiculed in the comments the appointment of Medvedev as prime minister. Commentator under the name max meyerling writes:

“Medvedev also prepares Putin a bath and cleans Putin’s shoes. His real work is a butler in one of Putin’s mansions. ”

Someone seemstome he is not without humor objects - they say, and we are better than:

Fun in America. And we have?

Jokes jokes, but what is this old new team capable of, which Putin gives the next May decrees? And how can “decrees” carry out modernization? Did Hewlett and Packard in the USA wait for someone’s decrees and the opening of some Skolkovo?

Finally, how will those who have a favorite word, “stability”, that is, stagnation, upgrade?

It seems that for six years Medvedev and Putin will definitely not be enough for the declared course of modernization and improvement of the situation in the country in which poverty is growing rapidly (against the background of growing conditions of the oligarchs).

What to do if six years is not enough? The way out is obvious: continuation is required. As Putin’s supporters like to repeat, they don’t change horses at the crossing!

And after six years, foreign experts will be surprised again, for the Russians will elect Medvedev as president. 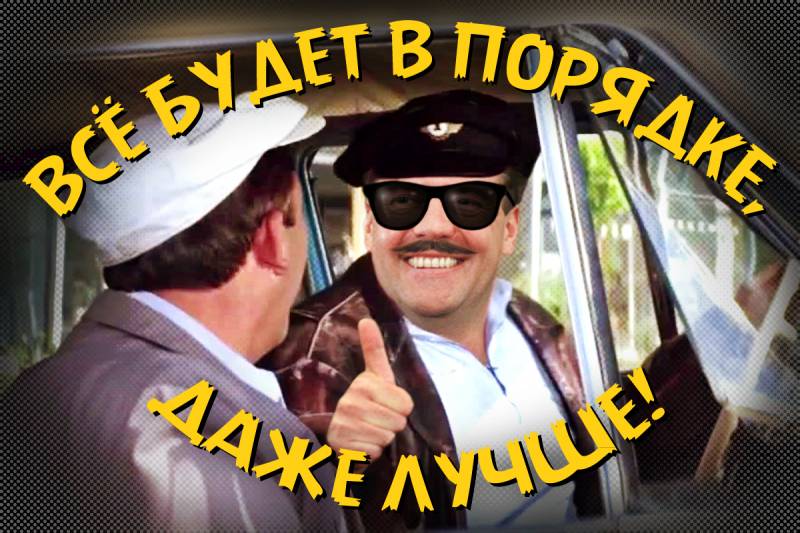 My friend wrote to me the other day: “Here I am sitting and thinking: is it such a trolling of the entire population of the country? .. Well, couldn’t it have been possible to find a couple of dozen new faces at least for appearance! ..” This is about his native government.

And I answered him: “These are courageous people. Despite the difficulties, they again headed the state. ”

And really, what kind of trolling is this? Trolling would be an appointment for the post of prime minister Chubais. This is also a notable innovator and reformer.

Ctrl Enter
Noticed oshЫbku Highlight text and press. Ctrl + Enter
We are
Situational analysis of the death of the MH17 flight (Malaysian Boeing 777), made on the basis of engineering analysis from 15.08.2014Bashar al-Assad: In Syria, not the “revolution” that the enemies are talking about, but the revolution of the army and the people against terrorists
Military Reviewin Yandex News
Military Reviewin Google News
178 comments
Information
Dear reader, to leave comments on the publication, you must sign in.