Remember the story: the school in Ussuriysk was named after the general who died in Syria

8 May 2018
17
In Ussuriysk, a ceremony was held to award the school No. 25 the name of Lieutenant General Valery Asapov, Hero of the Russian Federation, who died in Syria, RIA News. 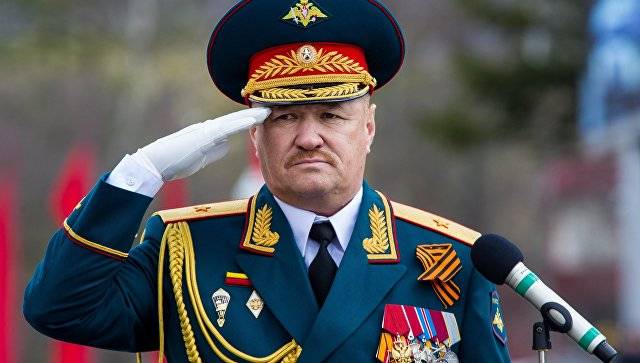 The event was attended by the widow of the deceased Olga Asapova. She thanked those present for the honor rendered to her spouse, and noted that "Valery Asapov was a decent man, hardworking officer, respecting his country," wished the guys to be equal to him.

Remember your history, without it, we have no future, Olga Asapova instructed.

In turn, schoolchildren talked about the general’s combat path, about his awards, read poems. The memory of the Hero of Russia was honored with a minute of silence and laid flowers at the memorial plaque with the name of Lieutenant General.

“Senior Lieutenant-General Valery Asapov, a group of Russian military advisers, was killed on September 23 at the command post of Syrian troops, helping Syrian commanders to manage the operation to liberate Deir ez-Zor. The general died as a result of a sudden mortar attack from the militants of the IG (the group is banned in the Russian Federation), ”the agency reminds.

Since August 2016, Valery Asapov led the 5 Army of the Eastern Military District.