Russians in Persia: from the Polyakov brothers to the leader of nations 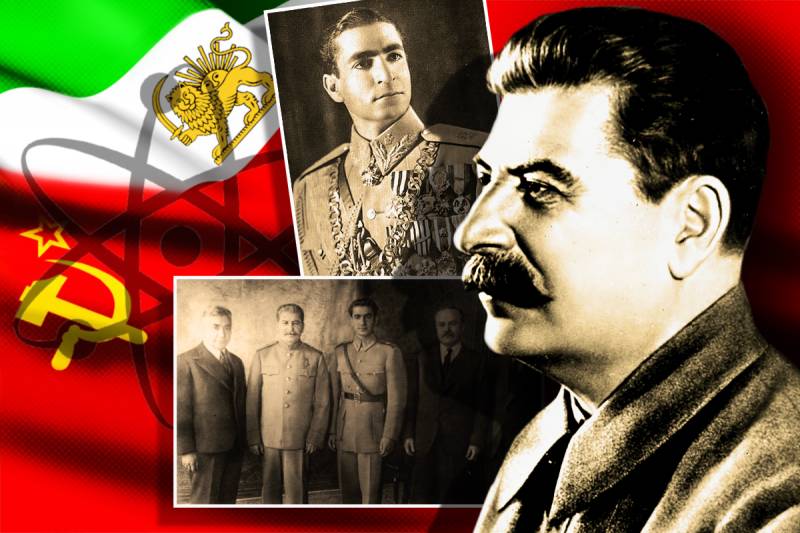 History He knows very few examples when the British managed to make room. In Iran, the Russians succeeded, and more than once they succeeded. 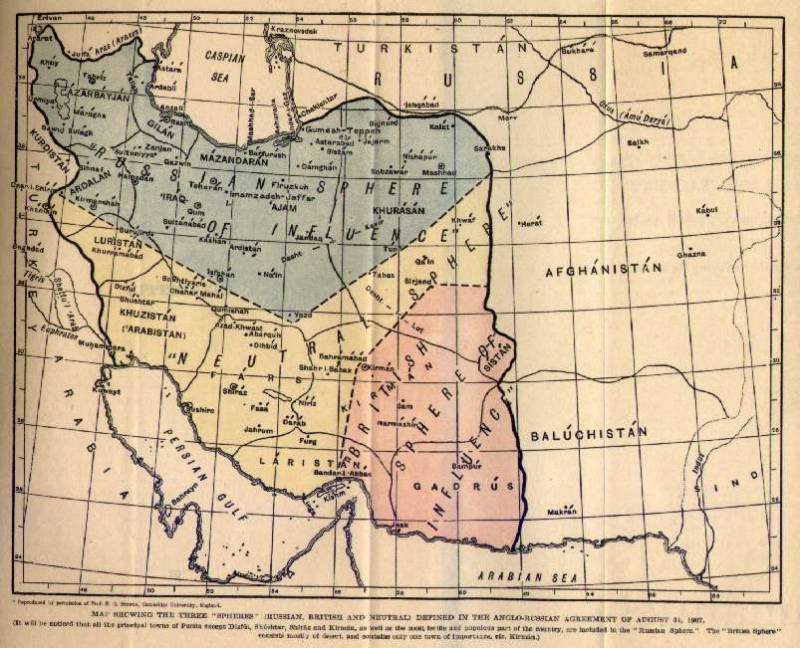 Persia, the Armenian and Kurdish highlands, Mesopotamia and Mesopotamia - for Britain for a long time these lands were almost a patrimony, like Egypt or India. Tsarist Russia only after it had firmly settled in the Caucasus, tried to compete with the British on the western and southern shores of the Caspian Sea and in Persia. Russian merchants literally imposed their cheap concessions on the Persians, and a little later, not without success, they tried to draw the southern neighbor into the business of extracting Baku oil.

But decades later, already Stalin’s Russia was able to settle in Iran, although perhaps only because the British simply had their hands tied during World War II. In order to support an ally in the anti-German coalition, by securing a southern lend-lease supply route, Churchill even went to the joint occupation of Iran with the Soviets.

Beyond the Caspian is land for us

The rapidly growing Russian economy at the end of the 19th century aggressively mastered sales markets, first of all, where it felt less competition. And the interest in Iran in this respect was also reinforced by the geopolitical ambitions of the royal power. In addition, Persia could well become a springboard for a strike on Russia, and not at all from the British, but from the Turks, who longed for revenge on the 1878 year.

In a secret note to the king, "On our tasks in Persia" from 1897, General Kuropatkin wrote: "We inevitably have to remember that if Persia today does not have important political and economic importance for us, then for our children and grandchildren this value will increase in a huge degrees. Today we are still culturally not strong enough to even cope with the powerful support of the government from the markets of Azerbaijan, Tehran and even Khorasan. "

Concessions based on banks and major industrialists have become a new tool for the realization of imperial appetites. And although the possibilities to penetrate Persia economically and financially were very limited, Russian capital was actually given a blank check on the use of the English experience of securing as many concessions as possible for the construction of roads, the laying of telegraph lines, and the development of fields.

Iranian telegraph networks, the British, more precisely, the Indo-European company, using bribing and political pressure, almost monopolized, leaving behind five of the country's nine telegraph lines. And one of them - with the connection to the strategic submarine cable Jask - Muscat - Karachi. Line London - Calcutta generally passed the "natural" way ... through Tehran and Isfahan.

The Russian newspaper Novoye Vremya wrote: “The telegraph primarily provided communication between England and India, and the needs of Iran were often completely ignored.” The government of Iran retained control over the two lines of telegraph, and only two not the most important lines were able to rebuild and control the Russians.

Local successes were also in other industries, for example, the Russian businessman Stepan Lianozov, the brother of the founder of the well-known dynasty of businessmen George, managed to settle in Persia away from the British. His modern fishing complex on the southern coast of the Caspian Sea, also worked on the basis of a simple concession agreement, and not only brought millions of profits, but also provided work for more than four thousand local residents.

The British pressure and the Iranian enterprises of the brothers Jacob, Samuel and Lazar Polyakov — the bank, the insurance company and the Partnership of Industry and Commerce, practically did not experience British pressure. The Polyakovs fully enjoyed the benefits of the concession in Persia, earning there several tens of millions of rubles. Among other things, they themselves credited and organized loans for the government of the Shah. However, unlike Russia, the Polyakovs did not get involved in really large-scale enterprises in Persia, preferring to diversify, that is, not to put all their eggs in one basket.

But in the struggle for railway concessions, the Russian-British confrontation turned out to be an international scandal. Russia's response to Julius Reuter’s unprecedentedly favorable conditions (up to 1873-year customs management on the highway) for the construction of the Trans-Iranian Railway from the Caspian to the Persian Gulf in 20 was the personal ultimatum of Alexander II. Russia managed to break this concession, but the preponderance of the British in Persia remained until the division of spheres of influence in a country extremely disadvantageous to Russia, which was much more convenient to bend Persia as something single. 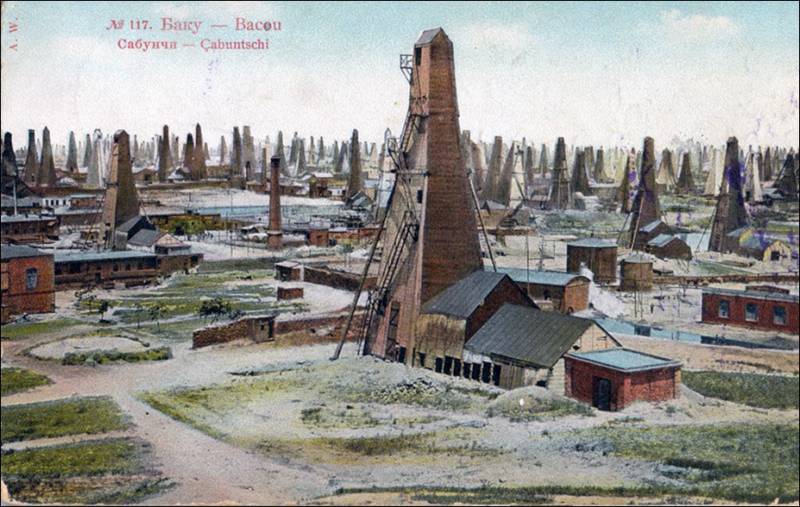 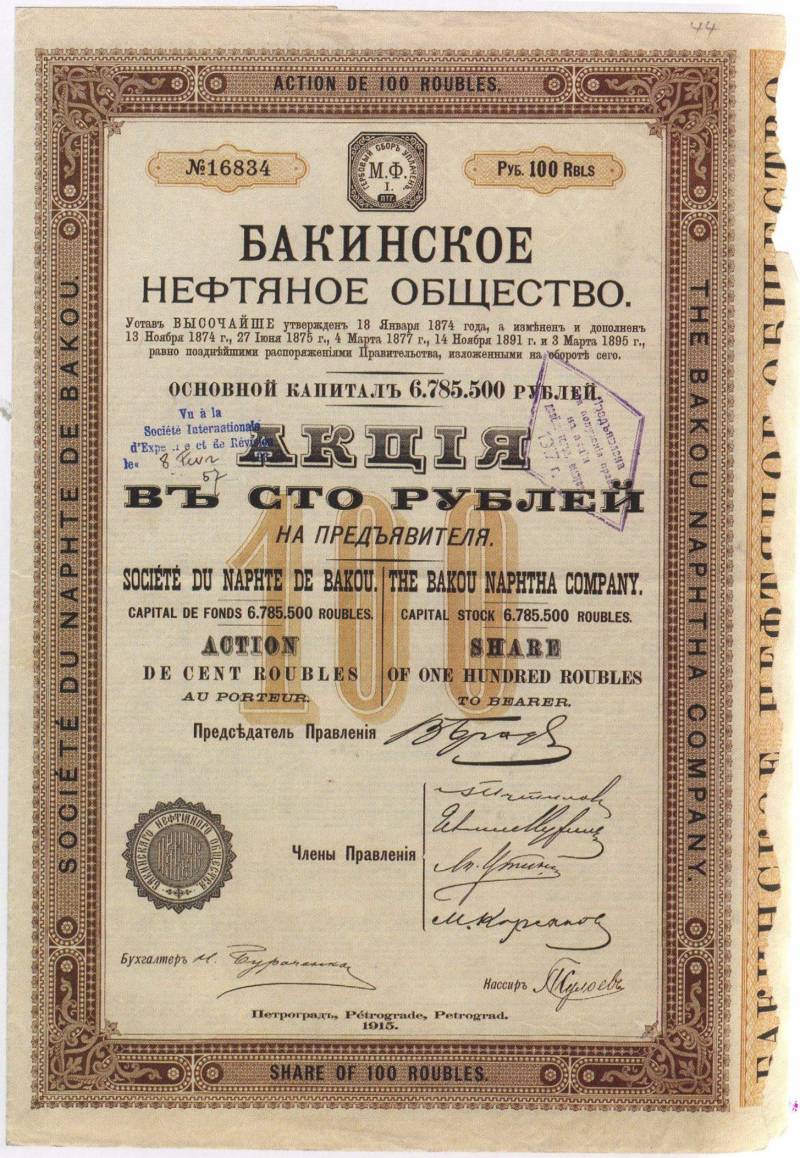 The Russians had the most difficulties in the oil sector, where our compatriots themselves were ready to offer concessions to rich Iranians. Baku oil is also largely the fruit of concession agreements. The first experience of public-private partnership in the industry was brought to life in 1901, namely in Persia, where the discovery of an oil field in general actually led to the creation of British Petroleum. The essence of the concession agreement was that the receiving state transferred to the concessionaire the right to use subsoil resources in order to cover the risk of exploration. But before the revolution, nothing good happened in the Baku fields.

Thanks to comrades Lenin and ... Stalin

However, after the revolution too. After the adoption of the famous Decree on 23 concessions in November 1920, the Bolsheviks began negotiations with a number of foreign firms on the granting of oil concessions in Grozny and Baku. Lenin warned the members of the Politburo that "concessions must be tried with all their might to give (that is, to find concessionaires) in Baku."

2 April 1921, the leader of the world proletariat, wrote: "It would be very good for 1 / 4 from Baku oil fields, maybe even 2 / 4, to pass to the concession." However, the major oil companies Standard Oil and Royal Dutch / Shell, slanted in the struggle for the monopoly in red Baku, finally scared away everyone else, including Iranian businessmen, who are actually ready for any conditions of the Soviets.

What Alexander II only dreamed about happened a few decades later - the shah of Iran itself managed to be crushed by itself to the Soviet Union under Stalin. And it was not so much the Soviet soldiers who even at the Teheran Conference provided the external guards of the American President Roosevelt and the British Prime Minister Churchill, as Soviet chervonets and Soviet industry did. In the days of Tehran-43, Shah Mohammed Reza Pahlavi, who had just recently reigned in Iran, hurried to ask for an audience with Churchill, Roosevelt and Stalin.

The leaders of the United States and Great Britain, without attaching serious importance to meetings with the young Shah, took him in their residences. 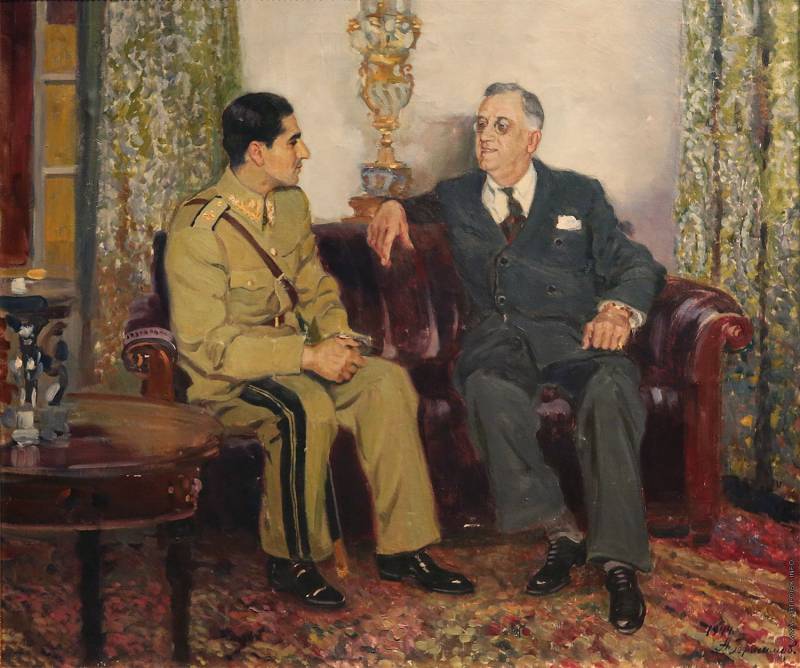 US President Roosevelt and Shah of Iran Mohammed Reza Pahlavi in ​​the painting by Soviet artist A. Gerasimov 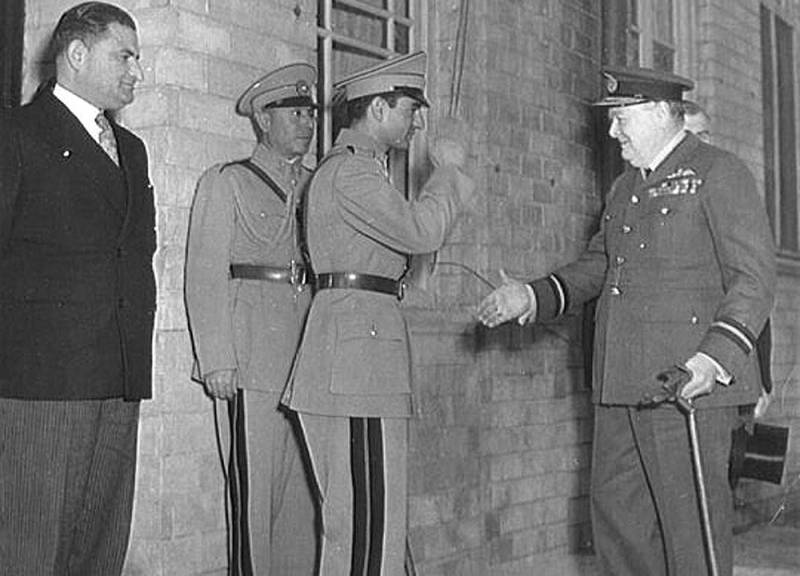 At the same time, Churchill kept him in the waiting room for almost an hour, Roosevelt - twenty minutes. And the leader of the peoples, in response to the young Iranian monarch’s request for an audience, did not disdain to come forward with a response request, expressing at the same time, through the secretary, his recognition of declaring war against Hitler Germany. 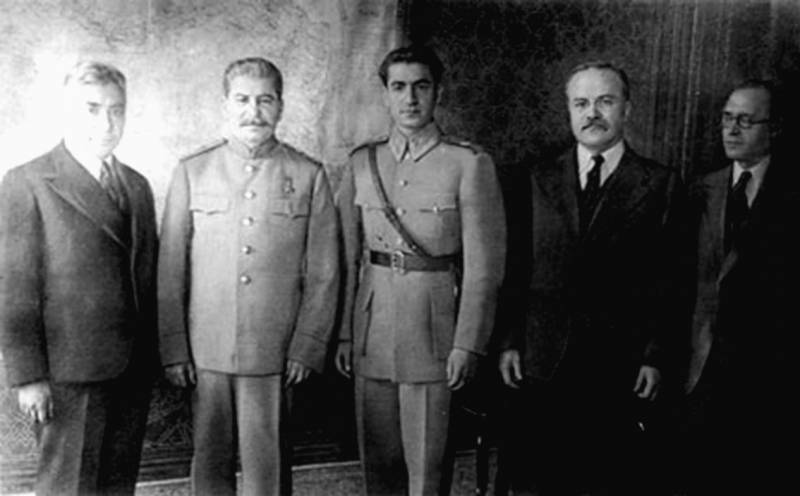 For the East, it was the highest symbol of respect, Stalin clearly forever conquered the heart of the 24-year-old monarch, which is a lot of evidence, and could not in very long conversations with the Shah negotiate such favorable conditions of future concessions that Russia reaps their fruits so far. The Soviet leader proved himself to be a great master of true Eastern diplomacy in Tehran, and the good traditions of Russian-Iranian cooperation have been preserved to this day. Even the atomic project in Bushehr, which became the base for Iran’s notoriously comprehensive atomic program, would have been impossible if Iran had forgotten the experience of Russian and Soviet concessions.

The agreement, known as 5 + 1, and subsequently, with the connection of Germany, like 6 + 1, continues to annoy the United States, not least because almost the leading role in it is assigned to Russia. Among Russian atomic lobbyists they know that the uncompromising leaders of Iran more than once in private conversations expressed their readiness to transfer the nuclear center ... to the concession of Russia.

After replacing Stalin at the top of Khrushchev’s government, he impudently called Shah Pahlavi “imperialist” from the rostrum of the next party plenum and in fact closed the topic of concessions.

The wise Iranian leader chose to ignore this attack by the unlucky Soviet leader; Khrushchev’s speech was not published in the local press, which at that time was quite an effective measure. As a result, fortunately, the matter did not come to a complete break between Russia and Iran. Apparently, not accidentally years later, even after a number of problems and serious disagreements, after attracting German and French nuclear scientists, Iran nevertheless made a choice in favor of the Soviet Union as the main partner in implementing its large-scale atomic program.

Ctrl Enter
Noticed oshЫbku Highlight text and press. Ctrl + Enter
We are
About Stalin and KhrushchevWhat you didn't want to know about England
Military Reviewin Yandex News
Military Reviewin Google News
11 comments
Information
Dear reader, to leave comments on the publication, you must sign in.