"4 days in May" was removed from the air of NTV

4 May 2012
439
Moscow. 5 May. INTERFAX.RU - NTV decided to remove 7 in May from the air of the military drama "4 of the day in May," the press service of the television company told Interfax on Saturday.

"NTV's intention to show on the eve of Victory Day - May 7 - the film by director Achim von Borris" May 4 of May "caused an extremely negative reaction from veterans' organizations and individual viewers of the Great Patriotic War. The film really touches upon the topics around which there are controversies and there are no definite evaluation, "- said the representative of NTV.
According to him, “since NTV’s intentions do not include in any way to darken the holiday for the generation of winners, Vladimir Kulistikov, the general director of the television company, considered it necessary to make changes to the grid, and therefore 7 of May on NTV will show the film by director Michael Ptashuk "In August 19-th ....".

Dear creative team and management of the NTV channel!

2012-05-04 14: 34: 32 In the broadcasting schedule of your channel on Monday 7 May (19: 25 minutes of Moscow time), the German film director Achim von Boris’s “4 of the Day in May” was shown. With all due respect to the people who created this film, and with all due respect to the work of your channel, we believe that showing this tape on the eve of the anniversary of the Great Victory could provoke associations among the viewer related to belittling the role of the Soviet troops in the victory over fascism. 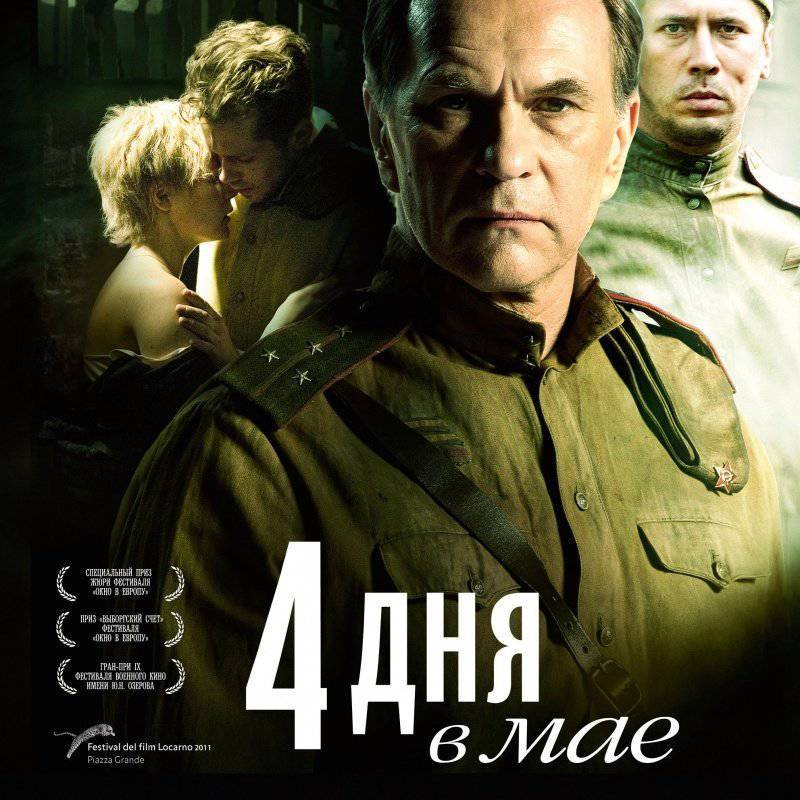 The film is based on the story "Russian epic" by Dmitry Frost. However, the story itself has no historical grounds and is the fruit of a clearly unhealthy fantasy of its creator. In addition, information about the fictional events of which the film "4 Days in May" is narrated is contained in Frost's own reply to the Russian historian Alexei Isaev, who caught the writer of juggling historical facts.

We are confident that the team of the federal television channel NTV fully realizes that the display of such provocative films about the Great Patriotic War, based on unsupported fiction, can sow doubt about the significance of the Victory of Soviet soldiers in the consciousness of modern Russian youth.

In the film, Soviet soldiers and officers are shown from the most unattractive side, and the director and screenwriters make a conscious accent on this. First, the demonstration of how the victorious army soldiers kill the German teenager in the back, hide behind young orphan children and deal with the constant clarification of relationships not only with each other, but also with their officers, obviously has nothing to do with what is accepted call civil-patriotic education, the need to develop that so much they say in our country. Secondly, there are unambiguous hints in the film that the soldiers of the Soviet army who entered the German land are mostly rapists and moral monsters who not only do not have the appropriate moral character, but also emphasize that they were made fathers commanders. Thirdly, the film clearly traces the direct storyline, showing the wisdom of the German forces in contrast to the opinion implanted by the authors about the endless stupidity of the Soviet servicemen.

In the film, the role of a drunkard and a rapist (major) tank troops played by Georgian actor Merab Ninidze. One gets the impression that the scriptwriters and directors deliberately focused on this in order to show that during the Great Patriotic War there was no brotherhood between the Soviet peoples, but only an open struggle of all against everyone for a place in the sun. And, according to the authors, it turns out that in the heat of this struggle, the front line could pass in such a bizarre way that the Nazi troops could even afford to make a choice against which particular unit to fight.

We think that NTV channel, the ratings of which in Russia are extremely high, should not become a platform, which take advantage of the use of force, trying to blacken Soviet soldiers and to question the appropriateness of the liberation of Europe from fascism. If we allow such films to be shown to a multi-million dollar audience today, then Russia does not exclude its own processions of accomplices of the fascist occupiers, the transfer of monuments and the destruction of mass graves tomorrow.

At one time, Peter Stolypin uttered a phrase that sounds like a warning to those who decide to change the story: "A people that does not have a national identity is manure on which other peoples already grow."

We urge the NTV channel to meet the wishes of ordinary Russians and to cancel the screening of the film "4 of the Day in May", guided by the expediency of real civil-patriotic education in our country. And the Order "For Merit» III degree obtained NTV general director Vladimir Mikhailovich Kulistikova of Russian hands of the President - has a striking confirmation of the fact that your federal channel state and society have great expectations.

Sincerely, creative staff and readers of the site "Military Review"!