To the future without brakes and stop-cranes

2 May 2018
76
The destruction of the universally binding norms of international law, which is taking on a larger scale every day, is the main driver of the slide of humanity towards a new world war. 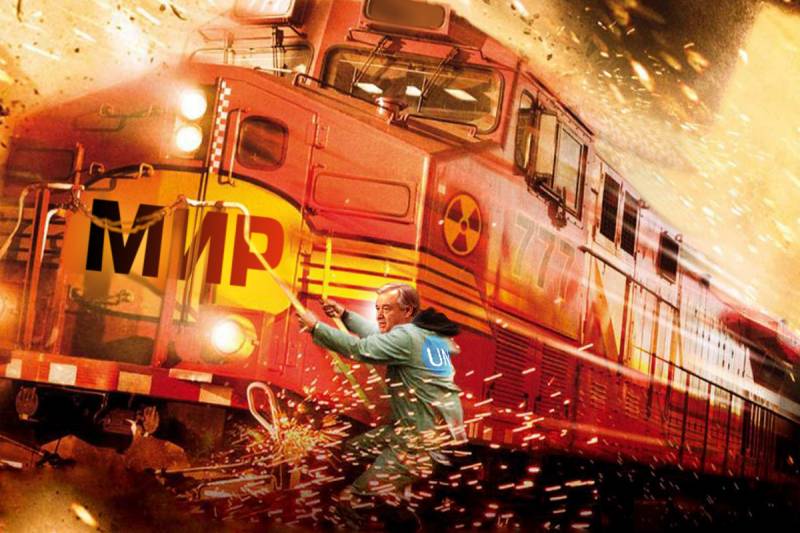 The world is becoming a very dangerous place, because there are no laws and rules in it. Regular proofs of this are literally a cant. Here, for example, the past day was noted at once by several insured "novels" of international life.

First, the so-called “Western coalition”, led by the United States, announced the launch of an offensive in Syria against the last enclaves of ISIL (prohibited in the Russian Federation). At first glance, just beautiful news! The noble "mens" and "vumeny" of the West carry the liberation of the long-suffering Syrian land.

Only one discrepancy! Nobody invited these “liberators” to Syria, and from a legal point of view they are exactly the same invaders and invaders as the same igilovtsy. If so, then such a “liberation” of Syria will, at best, be reduced to replacing one adversary with another.

And at worst, this robber coalition may well go to war and directly to the legitimate government of Syria and its armed forces. Most likely, it will be so, since the “liberators” in the person of the representative of the US State Department have already announced that they will “defend the US, the coalition and partner forces in the event of an attack.”

Question: from whom to protect? As soon as the western army went to war on ISIS, it is clear that the attacked will also shoot. And therefore, it is somehow strange, especially to stress that it is necessary to defend oneself from them. It kind of goes without saying. Something in this phrase is clearly wrong!

And most likely, it should be understood as a transparent hint that the United States will not tolerate interference by any third forces in their operations, from which they intend to "defend themselves." And such "third forces" in this case can only be Syrian government forces, loyal to the country's government militia, or the legitimate allies of the UAR from the armed forces of Russia or Iran.

That is, in other words, the United States quite clearly makes it clear that they will beat the Syrian army and its allies if they dare to interfere with their actions.

It reminds me of something history with a Hitlerite general who complained that the Russians were fighting not according to the rules, that is, they had the audacity to shoot at German soldiers who had come to free them from the "bloody Bolshevik dictatorship."

And these too! Not only have climbed without the demand for someone else's land, so also are going to "protect" it from its own owners! Threats to the Syrians, apparently, sounded for a reason. For this coalition, under the specious pretext of "destroying the last strongholds of ISIS," is fully capable of launching an offensive into the depths of Syria. Including the territory controlled by the legitimate government. 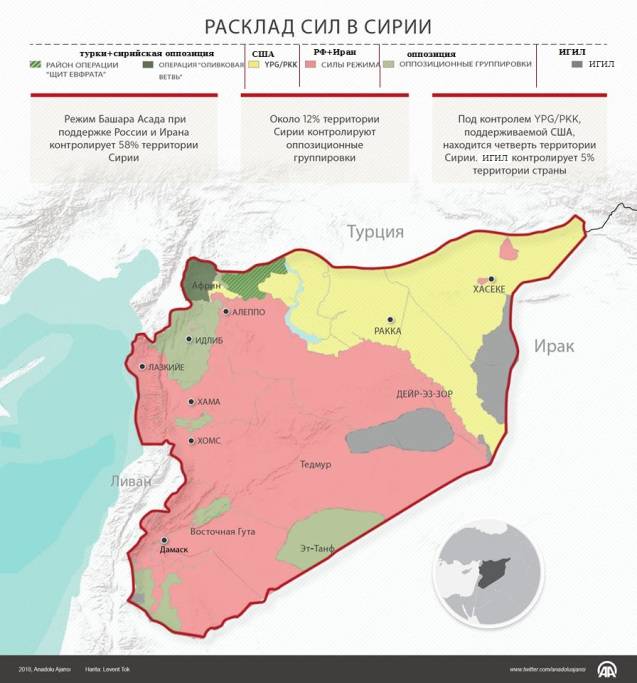 As can be seen on this map, one of these “strongholds” is located west of the Euphrates River, which is considered to be something of a natural border between the American occupation zone and the rest of Syria. On the other side of this igilov enclave, there is another American outpost — the base of At-Tanf (captured by the same “spill-over order” (near the border with Jordan). Thus, a seductive “strategic idea” arises. Simultaneous movement from both sides, from the east and south-west, to reach Igilovsky territory and thus to snip off a good third of its land from Syria. Especially as the Americans will probably easily agree with their wards “bogeles”. Write them to the Kurds or the "free Syrian army," and the whole business. Own hand lord!

It is hardly accidental that the situation under Deir ez-Zor, a key city on the banks of the Euphrates, which controls Syria, has sharply worsened in recent days. There are significant forces of the Kurds, who act as American infantry in the Syrian war.

Thus, the “liberation campaign” of the Western coalition in Syria may actually become the next phase of its absolutely lawless invasion of Syrian territory in order to capture a large part of this country. So it will be easier for them to dictate the conditions of the remaining untapped part.

Such an absolutely wonderful example of how the well-known principle of the criminal world is implemented internationally: the law is taiga, and the prosecutor is a bear.

By the way, it coincided that, on the eve of this, the real owner of this motley "coalition", the American Pentagon, announced the "sovereign right of Israel" to launch air strikes on the territory of Syria. How do you like this legal novel? Wanted to bomb someone, declare that this is your “sovereign right” and go ahead with a song!

But just try someone other than the most enlightened West to announce their sovereign right to bomb, for example, the city of Washington! There will be such a howl about the assassination of the holy of holies, the freedom and independence of America, that the devil will become sick of hell. That is, the "right" in its Western sense is something like a nipple, convenient because it acts only in one direction.

And here's another focus of the same past day. Announced that the British fighter "Typhoon" will join the mission of the NATO air police over the Black Sea to fight "potential aggression." What kind of "air police" is this, you ask. I will answer honestly: God knows! Because there is no such thing in international air law from the word at all. There is a sovereign airspace of national states, within which their air forces perform known functions to protect their border borders. And to climb there without demand is not allowed to anyone. And there is international airspace, in which all aircraft, regardless of their nationality, military and civilian, are absolutely equal and can fly wherever they want, subject to the general rules of air navigation. There is no “air force police” in any written international law even a trace.

However, here it is! Already flies over the Black Sea and is preparing to "prevent possible threats." Which, it should be understood in this way, will be qualified as such by the NATO "air police". They don’t like, say, how and where a Russian patrol plane flies, and they will be “prevented” by this “offender”. It is good, if only you spoil a little on the radio about your discontent. And then, even the hour, the fire will open. And why not open it, if there are no laws anymore, and anyone who wants to can declare at least a “air police officer”, even a flying court of the Hague!

And this is just the news of one day! The degradation of the international law system is proceeding at an alarming rate. It’s not for nothing that UN Secretary-General Antonio Guterres actually stated the paralysis of international law the other day when he said that “the mechanisms and guarantees that existed in the past and made it possible to cope with the risks of escalation, apparently, no longer exist.”

That is, humanity is actually in a train speeding down a slope, whose brakes have failed and in addition all stop-cranes do not work. You do not need to be an honorary railwayman to understand: such a composition has only a chance of remaining on rails until the first sharp turn. And there are more and more such turns on the way of this “train” in the world that is coming to an ever-increasing instability. And each of them can be fatal for us, its passengers. That is how, in an atmosphere of general chaos and paralysis of all legal stop-cranes, world wars began. And it is very similar to the fact that the bright future of mankind will be “illuminated” mainly by the glow of the next global fire.

It is not possible to avoid such a prospect in the conditions of everyday collapse of generally accepted law and order, in a situation when the force of law tends to zero, and the right of force knows no boundaries.

Ctrl Enter
Noticed oshЫbku Highlight text and press. Ctrl + Enter
We are
Situational analysis of the death of the MH17 flight (Malaysian Boeing 777), made on the basis of engineering analysis from 15.08.2014Syria: Americans scare themselves, and Asma Asad buys chairs
Military Reviewin Yandex News
Military Reviewin Google News
76 comments
Information
Dear reader, to leave comments on the publication, you must sign in.