Nord Stream - 2: A Carrot for Europe

2 May 2018
49
Before her visit to Washington, German Chancellor Angela Merkel reiterated the condition for the construction of the Nord Stream - 2 for Russia: it is necessary to preserve the Ukrainian gas transit to Europe. Moscow has not responded directly to this demarche, it is waiting for economically expedient proposals from the Ukrainian side. And what are the chances of Berlin that Kiev will put forward expedient proposals? 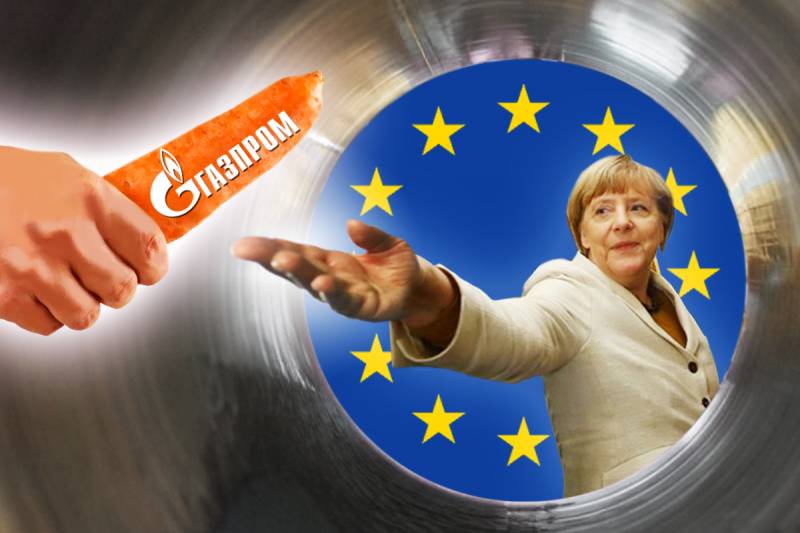 When you look at the debates around the construction of the joint venture - 2, as they have been going for many years, the thought creeps in that this is a carrot for Europe. Namely: Russia, judging by the laconic and always extremely correct statements of Gazprom, sees this as a distracting cover operation, which, at the lulling talk about which, is preparing to redistribute energy flows from Europe to China and further to Asia.

Of course, Russia will leave something to Europe, and even promises something to Ukraine, within the limits of economic expediency, bearing in mind that even a rat should not be driven into a corner. But there are no moans about this in Moscow. The joint venture 2 will be built, well, it will not be built - nothing terrible will happen either, for Russia. But the Ukrainian transit will still be radically revised, based on economic feasibility.

Such a position of Gazprom, and Moscow behind it, in marketing is called “polite refusal” - the most unpleasant form for the buyer side. Either they really think of supplying, or they lead by the nose in some forms - it is never possible to understand. No matter how they deny anything, valuable suggestions are accepted, but there is no close revelation.

Gazprom / Moscow hasn’t been making any movements towards Europe for a long time. The position of Moscow is formulated as follows: there is a consortium on the joint venture - 2, so let it work. No trilateral or even bilateral meetings on gas transit have been happening for a long time, proposals for such meetings from Europe have ceased. Note, not Russia sought them out.

It seems that Russia proceeds from the fact that the joint venture - 2 may not be, but the Power of Siberia and the Turkish Stream will definitely earn, which largely compensate for the Ukrainian transit to Russia. And then ... the rescue of the drowning is the work of those who stomp, Russia is going to the East.

At the end of 2019, the Power of Siberia gas pipelines to China and the Turkish Stream will be commissioned, after which Moscow can send all those who have not built gas pipelines to the global LNG market: they did not want to buy pipeline gas — buy LNG from Yamal.

But there is a nuance. For Germany alone, the joint venture 1 is enough, but the rest of Europe will have to switch to much more expensive American, Qatari and Russian liquefied gas. It is likely that Germany will provide itself with Russian pipe gas in the first place, and this may lead to a struggle in the European Union for equal access to Europe’s energy resources, and to new contradictions between European limit fits and Germany. The problem is that these limitrofy are in the majority, in fact, the political colonies of the United States, and Germany is not profitable to pay the American colonial system in Europe.

The gas problem 2019 of the year is already breathing Europe in the back of the head, it may well push the European Union to disintegrate in the struggle for cheap energy resources. The notorious George Soros again predicts the collapse of the European Union, but makes a false conclusion: Europe must unite to fight Russia, especially in Ukraine.

Such a strategy will only burden Europe’s position and accelerate its disintegration, which is what Washington is really trying to achieve. The United States will easily deal with the old European powers one by one: impose their economic will on them. And liquefied gas. Recall: the economic strategy of Donald Trump, which forms the famous Nobel Prize in economics Stiglitz, is to conclude separate agreements with each European country.

In general, all interested parties understand this. Russia offers energy cooperation to Europe, drives a sweet carrot with gas in front of its nose, although you can’t be forcibly cute. Russia does not benefit from the collapse of Europe, because then Europe will go piecemeal under American direct control, and will become even more anti-Russian.

In Europe and Germany, this is understood, and some elites do not want to lose all independence and go completely under America. The chairman of the European Commission, and Angela Merkel's protege, Jean-Claude Juncker recently reiterated: “My friend Vladimir Putin, although now it’s impossible to talk about friendship with Putin. We must learn to speak with Russians as equals. Without Russia, it makes no sense to discuss the security of Europe. Today, Europe is a small, weak part of the universe, GDP fell from 25 to 18-16% of the world, we lose demographically. "

Note, Juncker focuses on the security of Europe, that is, he sees the main threat in the disintegration of Europe under the burden of contradictions. By the way, Russia's GDP is more than 3% of the world, and it does not fall, but grows even under sanctions, and it is clearly undervalued, since it is fully productive, without financial overhead and manipulation. In the context of economic warfare, one can hardly believe the world, but Western rating agencies and other financial appraisers. The Russian economy has successfully resisted Western sanctions, despite its alleged "incompatibility." To explain this fact, world economists cannot, and do not notice another fact: the Russian economy is the third largest in the world in terms of power consumption. And what follows from this? ..

In general, 2019 may become a crucial year: the global redistribution of energy flows this year may bring down the US virtual financial and debt economy: it will come into collision with new economic realities. After all, the United States has become a global office center, and it is losing control over global assets, as it has inflated a huge financial bubble, and has broken away from the real, producing world. Hence, such sanctions pressure by the United States is not only on its direct competitors in the person of Russia and China, but also on its European allies. A global economic storm is approaching, and the American shirt is closer to the body of Donald Trump: “America first!” And Europe, too, not to mention Ukraine and other remote American colonies.

Ctrl Enter
Noticed oshЫbku Highlight text and press. Ctrl + Enter
We are
Notes of the Colorado Cockroach. "Demons ... Demons are all meaner and meaner ...""Condenser" and "Transformer". About almost mortars
Military Reviewin Yandex News
Military Reviewin Google News
49 comments
Information
Dear reader, to leave comments on the publication, you must sign in.