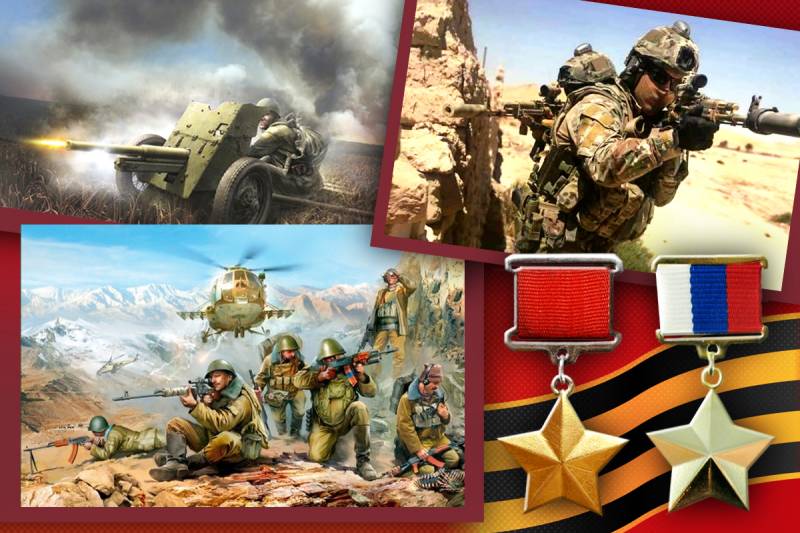 July 17, 1941, 476th km of the Warsaw highway. Senior artillery sergeant Nikolay Vladimirovich Sirotinin, covering up the withdrawal of his unit with a 76-mm gun, fought the German tank column. For escorted Guderian's 59 tanks, he became an insurmountable barrier, preventing them from moving forward. Alone on a collective farm field, sheltered by high rye, the fighter Sirotinin kept the enemy for two and a half hours, repelling the attacks. His position was taken when only three shells remained. The 20-year-old sergeant responded to the proposal to surrender with fire from a carbine and left the fighting position only after the heroic death, destroying 11 tanks, 7 armored vehicles, 57 soldiers and officers.

The German colonel, shocked by the feat of the young gunner, then said: "If the soldiers of the Fuhrer fought like this Russian, then we would have conquered the whole world."

After 77 years, he was answered by the President of Russia in a message to the Federal Assembly, saying that such fighters "they will never have."

24 August 1941 of the year. During the storming of the Kirillovsky monastery near Novgorod, the junior political officer Pankratov Alexander Konstantinovich committed self-sacrifice, which later became known as the feat of Matrosov.

From high monastic buildings, the enemy responded with heavy fire, the company commander was killed, it was impossible to rise to the attack. The political leader managed to crawl to the enemy machine gun and throw grenades at him, but soon the shooting resumed. Then Pankratov, shouting “Forward!” Rushed to the embrasure and closed the barrel of the machine gun, which enabled our fighters to break into the enemy's position and destroy the observation point, from which the fire was adjusted. This is the first documented fact of such a feat. According to various sources, during the Great Patriotic War, it was repeated from two hundred to four hundred times. Alexander Pankratov was 24 of the year.

Afghanistan, April 21 1982. When performing the task of guarding the road, a platoon of Lieutenant Alexander Demakov was ambushed. Dushmans, using numerical advantage, tried to capture our fighters. Then Lieutenant Demakov, reporting by radio to headquarters, gave the order to the group to crawl off to the aryk, while he himself remained to cover her departure. The enemy tried to rise three times into battle, but the fire from a lieutenant's submachine gun pressed everyone to the stones. When the ammunition ran out, Alexander blew himself up with the grenade of himself and the dushmans who surrounded him.

Afghanistan, September 1983. The reconnaissance unit of the reconnaissance company of the 181 th motorized rifle regiment of the 108 th Nevelsk Red Banner Division was supposed to advance to the mountain sector and ensure the safety of the convoy’s passage. During the assignment, the scouts were ambushed. Private Nikolai Anfinogenov took over the cover of the group's departure. When the ammunition ended, the fighter was surrounded. Then, with the last grenade, he blew himself up and dushmans. Eight bandits were destroyed, and the reconnaissance group was able to reach the position.

Afghanistan, October 31 1987. Junior Sergeant Yuri Islamov, covering the withdrawal of his comrades from the environment, continued to fight, being seriously wounded. When the ammunition ended, a grenade blew itself up along with the dushmans. He was 19 years old.

Syria, June 2 2016. Marat Radikovich Akhmetshin, a Russian officer from Kazan, the grandson of a sailor and the son of a pilot, under Palmyra, led the artillery battery fire. At some point, he was left alone against the igilovtsev 200 and gave battle. The bandits had tanks and armored personnel carriers. The captain of artillery - automatic, three guns and grenades. Wounded, he hit several tanks and armored personnel carriers. When the help arrived, the captain held a grenade in his hand without checks, and the earth was burning around. Only when a grenade was taken from Marat did he lose consciousness. The doctors could not save the life of the heroic officer.

Syria, June 15 2016. From the military camp near Palmyra, in the province of Homs, the humanitarian convoys were sent with 25 tons of cargo consisting of water, food and medicine. Sergeant Timoshenkov Andrei Leonidovich, the commander of the Marines Division, along with four servicemen, was in combat guard. And at that time, when many civilians had already gathered around the cars with humanitarian aid, three SUVs filled with explosives broke through to the place of distribution of products. Two of them were destroyed with an aimed fire from an anti-aircraft installation, and the third pick-up flew right on the trucks at full speed. When no more than 100 meters remained before him, Sergeant Timoshenkov ordered everyone to withdraw, grabbed a hand-held grenade launcher and, cutting off the car’s path, fired almost point-blank. The bomb on the wheels was blown up. Andrei was seriously injured and incompatible with life ... The 29-year-old hero still has a wife and a little daughter.

Our история, and the past, and modern, rich in exploits, they can be described for a very long time.

We know that now lies on the scales
And what is happening now.
An hour of courage struck on our watch,
And courage will not leave us.

Generations change, but Courage and Valor do not go away. The spirit is not broken. Heroism is immortal. Memory is eternal.

Russia has anyone to bow their heads and have something to be proud of.

Ctrl Enter
Noticed oshЫbku Highlight text and press. Ctrl + Enter
We are
Commentary on A. Petrov's interview “Fire and Tactics in the Russian Army: Another Look”About Stalin and Khrushchev
Military Reviewin Yandex News
Military Reviewin Google News
18 comments
Information
Dear reader, to leave comments on the publication, you must sign in.