Armenian "Peacemaker". Does the “revolution” have an end?

1 May 2018
95
The crisis of power in Armenia continues to gain momentum. Initially, the entire lexicon of the “velvet revolution” in Yerevan simply shouted about far-reaching consequences, which in no way fit into the soothing rhetoric of various political scientists and journalists. The very statement of the claim "we are tired of Sargsyan" breathed some dangerous "street democracy." Agree that such eloquence with statehood has nothing in common. This is the vocabulary of a tired married couple, grandmothers on the bench, anyone, but not statesmen. 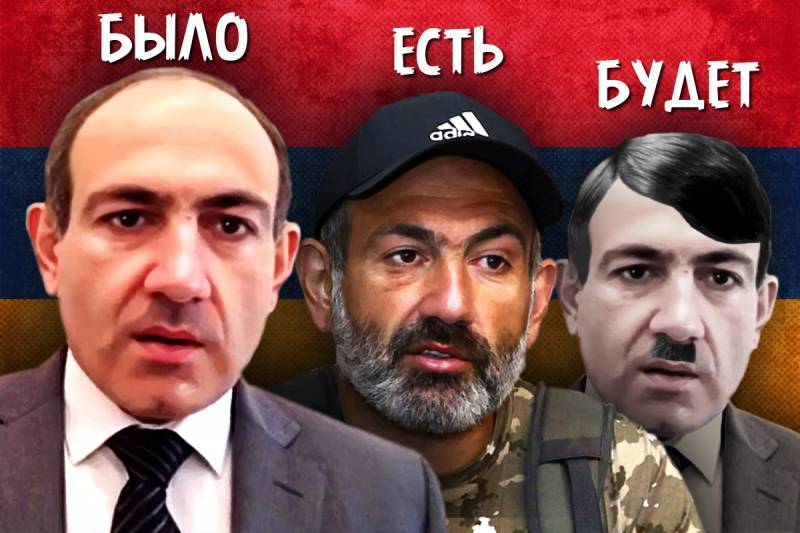 Well, okay, opposition leader Nikol Pashinyan, a citizen with a very controversial reputation (only contacts with the nationalist party Dashnaktsutyun are worth something), who “pereobulsya” in time from the classic suit in camouflage, as if working on Baghramian Avenue, snipers, removed Serzh Sarg from the government. . Excellent, s. It seems to be time to cover the shop and prepare for the elections, i.e. get off the dangerous path of the "power of the crowd." But here Pashinyan declares that he no longer wants to be a “high-noble noblewoman”, but wants to become “the ruler of the sea”, namely, the prime minister. This means that the “street democracy” mechanism has just begun to gain momentum.

The situation with a catastrophic speed began to overgrow with all the formal signs of Maidan. This is not only rhetoric. Knowing where the well-known piano rolled out, however, the Armenian format. The pots as an irrelevant item were forgotten, but paper crowns appeared. Intact, however, remained blocking highways and urban transport arteries in the abyss of endless rallies and demonstrations. Apparently, such a banal idea that a large city is a living organism with its industrial enterprises, public utilities, ambulance services, the simple of which can cost not only money, but also life, does not reach one oppositionist in the world. 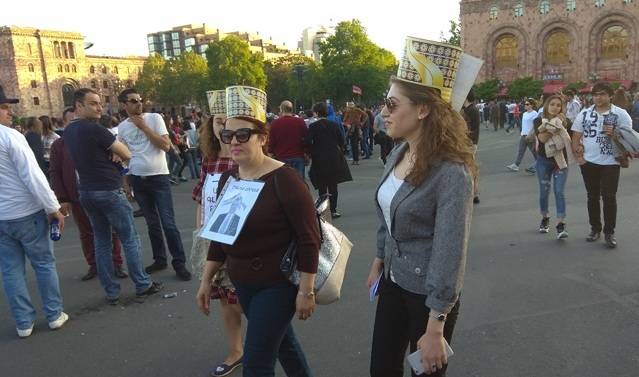 The natural continuation of all this was the pickets blocking the work of administrative institutions. For example, in Gyumri, supporters of the Yash Pashinian party organized a sedentary picket in the city hall building. They demanded that the mayor’s office workers join their rally. Not only are the administrations of individual cities somewhat distant from politics and called upon to deal with economic and managerial issues, the very statement of requirements is already the first bell of intolerance towards any dissent that is peculiar to Maidan sentiments. 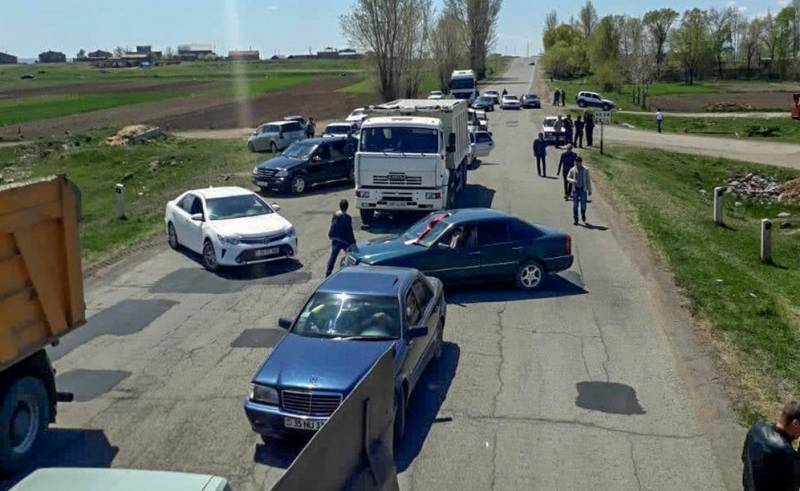 Blocking the highway near the village Getk

But these are the “cute” little things of “velvet revolutions” that are easy to start but hard to stop. After all, the dangerous crowds of self-excited citizens sooner or later, according to unofficial Maidan laws, will demand their own pantheon of national enemies. First, the harbingers of this pantheon appeared on the network. A notable number of comrades with Armenian surnames staged a veritable extravaganza of defamation of all those who had the imprudence to at least treat their “velvet” protest without proper enthusiasm. Moreover, the network "bortsuny" did not hesitate, even the areal battle. But these were flowers, through which nationalistic sentiments were peeking.

For example, the already bald head of journalist Armen Sumbatovich Gasparyan, who allowed himself not to bubble with strained enthusiasm for dangerous events, showered demands ... to change his last name so as not to dishonor Armenian roots. In it as! The same fate awaited Semyon Bagdasarov, a colonel in the reserve, who, unlike Pashinyan, actually served his country and did not need to change into a theatrical camouflage T-shirt. Those. all dissenters were denied their ethnic roots and the right to a surname, due to the divergence of opinions. In addition, surprisingly quickly, these citizens received the support of Ukrainians nationalists, from which, by the way, they did not even think about moving away.

But the first calls ended with a real alarm. A site in Armenian appeared on the network’s open spaces, which by its punitive and lynching character was in no way inferior to the Ukrainian “Peacemaker”, unless it does not yet publish personal data on which people can be found. But the first step is the hardest ...

The site has already posted photos and a brief reference about the terrible "sins" of a person, who is recorded as the enemies of Armenia. Now Armenia has about fifty enemies, and the list continues to grow. Who is there just not. Priests and officials, ordinary citizens and institute teachers, representatives of power structures and businessmen. For example, Mariam Sargsyan was on the list of enemies, she is the director of one of the Yerevan schools. Her sins consisted in the fact that she did not allow students to rally. Questions of responsibility of the person holding the post of director for the lives of their students, apparently, do not care about anyone. And maybe Mariam fail to slap someone? I should add that the teachers and principals of educational institutions who refused to give their wards the opportunity to loosen up a bit in the field of political struggle were generally out of luck on this site. They are all enemies, regardless of gender or age.

In addition, the site has one "fun" feature, directly pointing to the cave court of Lynch. So, any visitor can vote "condemn" or "pardon" of a person by clicking on the desired button. Those. This is such a network form of street “justice,” when, for dissent and careless phrases, an enthusiastic crowd is already joyfully dragging the next enemy to the noose. But even this trifle is just a conventionality, since the creators of the site have already passed a sentence at the head of the list, indicating that there are no innocent people on the list.

What is this? The crime? The euphoria after the expulsion of Sargsyan? Open provocation? The latter would be quite reasonable to assume. But why did the opposition not openly and loudly disown this site? After all, this resource is almost without hiding it, calls for illegal and immoral persecution, launching a monstrous Maidan mechanism capable of splitting the country.

Of course, I know that life in Armenia is far from sugar, because salaries in 6 thousand rubles and the salary is difficult to call. And, for sure, the people from the list of the Armenian “Peacemaker” are far from angels, and some of the bunks were waiting. But where does this path lead? To improve the situation in Armenia? It is doubtful.

Ctrl Enter
Noticed oshЫbku Highlight text and press. Ctrl + Enter
We are
"Condenser" and "Transformer". About almost mortarsSu-57 and dancing with the wallet
Military Reviewin Yandex News
Military Reviewin Google News
95 comments
Information
Dear reader, to leave comments on the publication, you must sign in.