How the "perestroika" of Alexander II almost led to confusion 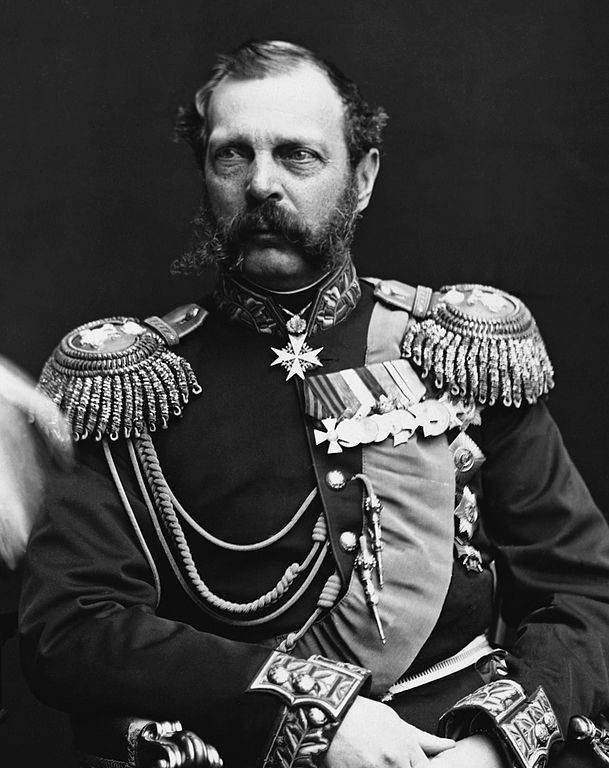 200 years ago, 29 April 1818, was born Alexander Nikolaevich Romanov. Russian Emperor Alexander II entered the Russian history as the initiator of large-scale reforms, and is also known in Russian pre-revolutionary historiography as the “Tsar Liberator” due to the abolition of serfdom in 1861 and the victory in the Russian-Turkish war of 1877-1878.


In reality, his actions almost caused confusion. According to the chief procurator of the Synod, K.P. Pobedonostsev, the restructuring begun by Alexander II and supported by many thinking people, soon showed "the destructive consequences of bourgeois evolution." Only the tough policy of his heir Alexander III was able to suspend a catastrophe that could have happened not in 1917, but in 1881.

Alexander Nikolaevich was born 17 (29) on April 1818, in the Miracle Monastery in the Moscow Kremlin, where the royal family arrived in early April to meet Easter. Alexander was the eldest son of the first Grand Duke, and from 1825, the imperial couple Nikolai Pavlovich and Alexandra Feodorovna (daughter of the Prussian monarch Friedrich-Wilhelm III). Alexander received a good education. His mentor, who led the process of upbringing and education, and the teacher of the Russian language was V. A. Zhukovsky, the teacher of the law of God - theologian, Archpriest G. Pavsky, the teacher of history and statistics - K. I. Arsenyev, legislation - M. M. Speransky, Finance - E. F. Kankrin, foreign policy - F. I. Brunov, military instructor - Captain K. K. Merder, and other eminent teachers.

Alexander's personality was formed under the influence of his father, who wanted to see the heir to the military leader, and at the same time the poet Zhukovsky, who sought to educate an enlightened monarch, a monarch-legislator, conducting sensible reforms in Russia. Both of these trends left a deep imprint on the character of the future sovereign.

Having headed Russia in 1855, after a rather unexpected death of his father, Alexander received a heavy legacy. The severe Eastern (Crimean) war continued, Russia was internationally isolated. The country faced severe domestic political issues: the Caucasian War continued for a long time and absorbed many forces and means, the peasant question that threatened the new turmoil was not resolved, etc. Alexander Nikolayevich was forced to become the tsar-reformer. In March 1856, the Paris Peace was concluded. Russia was defeated, but managed to recover with relatively small losses, including the demilitarization of the Black Sea. In the same year, Alexander II secretly concluded a “dual union” with Prussia, breaking the diplomatic isolation of Russia. At the same time, Alexander Nikolayevich did some relaxation in domestic policy: the recruitment kits were suspended for 3; The Decembrists, Petrashevists, the participants of the Polish uprising 1830 — 1831 received privileges. In 1857, military settlements were abolished. A kind of “thaw” began in the social and political life of Russia.

Alexander headed for the abolition of serfdom and in 1861 he pushed through this decision, despite the resistance of some of the nobility. Moreover, a milder version of the reform was adopted - it was initially proposed to carry out the “Baltic version”, with the landless liberation of the peasants. However, the reform was halfway and the land issue was one of the prerequisites for the 1917 disaster of the year. Peasant plots were significantly cut back in favor of landowners, peasants had to pay a ransom, the peasant community was destroyed, and the ruined peasants became slaves to the capitalist system that was developing in Russia. With the support of the emperor, territorial and judicial reforms (1864), urban reform (1870), military reforms (60 — 70's), education reform were carried out. In general, Alexander conducted liberal reforms. Thus, the position of Jewry was alleviated, corporal punishment was abolished, censorship was facilitated, and so on.

During the reign of Alexander, Russia won the Caucasian War and completed it. The North Caucasus became peaceful, the active development of this wild margin of the empire began. The empire was successfully completed in Central Asia: in 1865 — 1881. Most of Turkestan became part of Russia. In 1870, Russia, taking advantage of Prussia’s victory over France, was able to cancel the Paris Treaty article on the neutralization of the Black Sea. Russia won the Russian-Turkish war 1877-1878. However, St. Petersburg, under pressure from Western "partners", had to abandon a significant part of the conquests. The Russian Empire returned the southern part of Bessarabia, lost after the Crimean War, and received the Kars region. But the centuries-old problem of the straits and Constantinople-Constantinople has not been resolved. And Bulgaria, liberated by the feat of the Russian soldier, began to drift towards Germany. The Balkans, not entering the sphere of influence of the Russian Empire, became the "powder cellar" of Europe. Thus, Russia's victory over Turkey was unfinished, causing new problems and issues.

It is worth remembering that Alexander's government made another strategic mistake - in the year 1867, the US sold Alaska, which seriously worsened Russia's position in the Asia-Pacific region. Under pressure from pro-Western liberal circles in Petersburg, they sold Russian America. That is, Russia has lost the ability to control the northern part of the Pacific Ocean and lost a strategic foothold on the American continent, which could restrain the predatory US aspirations in the future.

After the Polish uprising 1863-1864. and the attempts of Karakozov on the life of the emperor in April 1866, Tsar Alexander II began to listen more to supporters of a protective (conservative) course. The Grodno, Minsk and Vilna governors-general appointed a “guardian” M. N. Muravyov, he conducted a series of reforms aimed at Russification, restoring the positions of Orthodoxy in the province. Conservatives D. A. Tolstoy, F. F. Trepov, and P. A. Shuvalov were appointed to the highest state posts. Many reformists, with the exception of a few exceptions, such as War Minister Milutin and Minister of the Interior Loris-Melikov, were removed from power. However, in general, the course of reforms was continued, but more carefully.

At the end of Alexander's reign, a project was developed to expand the functions of the State Council and the establishment of the “General Commission” (congress), where it was supposed to introduce representatives from Zemstvos. As a result, autocracy could be limited in favor of organs with limited representation. The authors of this idea were the Minister of the Interior, M. T. Loris-Melikov, and the Minister of Finance, A. A. Abaza. The king, shortly before his death, approved the draft, but they did not have time to discuss it at the Council of Ministers. Alexander III will roll this project.

The reforms led to the destabilization of the domestic political situation in Russia. The liberal public demanded a change in the state system of the empire, anti-government proclamations were distributed at universities, there were calls for the overthrow of the king. Started in the minds, rampant terrorism, nihilism and anarchist ideas. The liberal intelligentsia and the students put forward more and more new requirements. The overwhelming number of those who participated in the revolutionary movement were young people of largely minor age. The revolutionary movement quickly developed, which soon began to threaten the state. An increase in crime was observed throughout the country, in 2,7 times more than in the reign of Nicholas I.

The revolutionary underground, represented by the People of the Volunteers, strengthened its position and took a course toward the liquidation of the king. According to the conspirators, the death of the emperor was supposed to cause a revolutionary wave in Russia. The guard of the sovereign was then organized extremely poorly. 25 May 1867 in Paris at Alexandra was shot by a Polish emigrant Berezovsky. 2 April 1879, when the emperor was walking around the Winter Palace without protection and without satellites, Solovyov shot Alexander several times. 19 November 1879, the conspirators blew up the train of the emperor's retinue, mistaking it for the king. 5 February 1880 was an explosion on the first floor of the Winter Palace. He led to numerous sacrifices. Only 12 in February 1880 of the year was established by the Supreme executive commission for the protection of public order and the fight against the revolutionary underground. But he was headed by a liberal-minded Count Loris-Melikov. The result of such a negligent attitude towards the mortal danger and activity of the then “fifth column” was sad. Alexander was mortally wounded by 1 (13) in March 1881, a bomb abandoned by the People's Party Grinevitsky, and died the same day in St. Petersburg.

The tragic death of Alexander Nikolaevich was largely due to his activities. No wonder Pobedonostsev said that only pure autocracy can resist the revolution. Alexander loosened the "iron" Nikolaev empire. Fortunately for Russia, the strong hand of Alexander III, who was able to freeze the decay of the empire for some time, intercepted the reins of power after his death.

Prominent Russian historian, professor V.O. Klyuchevskiy appreciated the reforms of Alexander II: “With one hand he bestowed reforms, excited the most courageous expectations in society, and with the other he put forward and supported the servants who were destroying them ...”. The historian noted: “all his great reforms were inexcusably belated, were generously conceived, hastily developed and dishonestly executed, except perhaps the judicial and military reforms ...”.

The empire in 1880- years resisted, the troubles were avoided. However, the threat was great. So, when sovereign Alexander III ascended the throne, the treasury had an annual deficit of 1880 in 44,5 million rubles. The economic development of Russia due to liberal approaches (in particular, the rejection of protectionism) slowed down, and agriculture and industry stagnated. The economic consequences of the reforms were disappointing. The public debt of Russia grew 3 times and amounted to 6 billion rubles: 500 million was spent on reforms, 1,5 billion were worth the Crimean and Russian-Turkish wars, 4 billion were spent on the construction of railways (with the active participation of foreign and Russian speculative capital).

The conservative ideologue and chief procurator of the Synod of Pobedonostsev expressed the general situation very well. On the day of the murder of Alexander II, he sent a message to the heir to the throne, in which he wrote: “You get Russia swept away, shattered, bewildered, eager to be led by a firm hand, what she wants and what she doesn’t want and can’t be prevented ... The whole secret of the Russian order and prosperity is above, in the person of the Supreme Power. Do not think that the authorities subordinate to you limit themselves and put on the case, if you do not limit yourself and do not put on the case. Where you dissolve yourself, dissolve yourself and the whole Earth. Your work will push everyone to work, your weakening and luxury will flood the whole earth with relief and luxury - this is what the union with the Earth, in which you decide, and the power that is destined to you from God ”.

Other thinkers also saw the danger of the situation. “All Russia stands at some final point, hesitating over the abyss,” noted F. M. Dostoevsky. 11 June 1881 Sovereign Alexander III wrote to his brother, Grand Duke Sergei Alexandrovich: "A little more, and we would be on the eve of a complete revolution." Then Russia managed to keep on the edge of the abyss.

Ctrl Enter
Noticed oshЫbku Highlight text and press. Ctrl + Enter
We are
Mortars: the evolution of large caliberSu-57 and dancing with the wallet
Military Reviewin Yandex News
Military Reviewin Google News
127 comments
Information
Dear reader, to leave comments on the publication, you must sign in.