April 24 2018
4
From 23 to 27, the Center for Excellence in NATO Cyber ​​Defense Cooperation (CCDCOE) in Tallinn (Estonia) will become the site of the Locked Shields 2018 exercise (“Closed Shields”), the largest international cyber tactics, during which almost real cyberudar is simulated which participants will have to handle. 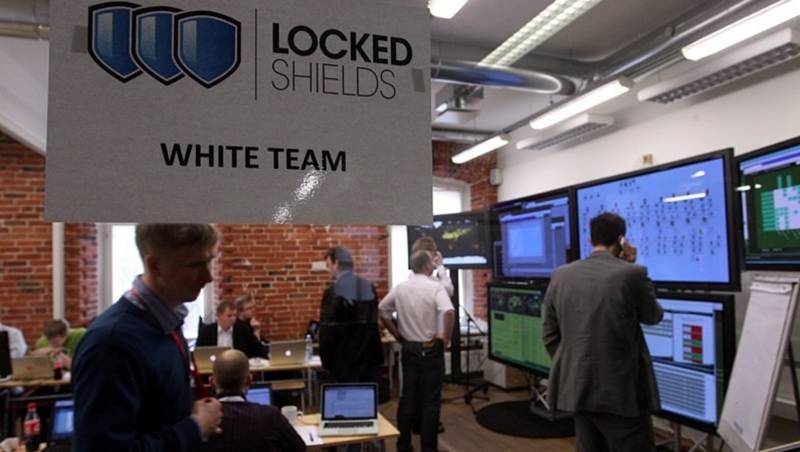 A press release on the official website of NATO says that "the annual Locked Shields exercise is a unique opportunity for cybersecurity professionals to work out in practice the protection of computer systems and critical infrastructure in the face of powerful cyber attacks."

As always, the leadership of the alliance is trying to convey to the visitors of the site the idea that NATO conducts all exercises exclusively to ensure security and stability throughout the world. And everyone who does not agree with this and is trying to accuse the countries of the alliance of some aggressive intentions, misunderstand the meaning of the existence and activities of NATO. Come, they say, on our website, everything is written there.

But the script of the exercises destroys this picture with flowers and kittens:

The small island state of Berilia broke off diplomatic relations with Crimson, its larger neighbor and foe. After that, the situation in the country deteriorated. The Crimson minority is satisfied with street protests in Berilia. Then Berilia undergoes a series of cyber attacks, as a result of which she loses control over her drones and the only international air base.
Crimson is accused of aggressive actions in cyberspace, although there is no hard evidence of this. Berili, a recent member of NATO, weakened by cyber-attacks, is considering all the options available to her. One of them is to resort to Article 5 of the NATO Charter and to call on the military alliance to commence hostilities against Crimson.
Berilia and Crimzonia are fictional states, so such a scenario is just a game. But the fact that such a situation sounds absolutely believable proves the relevance of the Locked Shields teachings.

In general, the organizers of the exercise call on everyone who reads this description to play in the association: what real countries could be hiding under these invented names? As for the “big neighbor,” no one, perhaps, will have any doubts. The role of Beryllia, a country where there is a “Krimszon minority”, has more applicants: all Baltic countries are well suited.

By the way, the country of Berilia annually appears in the "Closed Shields" as a victim of cyber attacks, but a particular opponent in the face of Crimson appears on the scene for the first time. We will not speculate on the fact whether the word Crimsonia is accidental so consonant with the word Crimea (Crimea - Eng.).

This is not the only detail that distinguishes Locked Shields 18 from its versions of past years. This year, the armed forces of Finland and the Military Academy of the Swedish Armed Forces take part in organizing the exercises. The two countries continue to adhere to a policy of non-alignment with military blocs, shattering NATO Secretary General Jens Stoltenberg’s dreams of alliance. After all, then the alliance would have received almost complete control over the Baltic Sea, and the NATO border with Russia would have been extended by one and a half thousand kilometers.

But Stockholm and Helsinki continue to assert their right to neutrality. Despite the fact that pro-Western politicians in these countries are trying to create grounds for Russophobic sentiment, the current governments explicitly declare that they do not intend to enter into conflicts with Moscow, and therefore do not see the need to join the North Atlantic alliance.

And, as practice shows, this position is the most profitable. The events of recent months clearly show that there is no special right for a NATO member state, but there is an impressive list of duties, some of which are not spelled out in the Alliance’s Charter. The UK is dramatizing Sergey Skrypall’s poisoning, blaming Russia for this and complaining to Washington, which is forcing its European slave partners to aggravate relations with the Kremlin, sending Russian diplomats.

What prevents NATO leaders from repeating this performance, but already in cyberspace? In addition, by the end of this week, the script will already be completed.

Ctrl Enter
Noticed oshЫbku Highlight text and press. Ctrl + Enter
We are
A great interview with Sergey Lavrov: about Ukraine, Obama and IranWhat you didn't want to know about England
Military Reviewin Yandex News
Military Reviewin Google News
4 comments
Information
Dear reader, to leave comments on the publication, you must sign in.