Fiction weekend. Gerontological records of the "shifting power" of the US Senate

April 22 2018
89
Your attention is provided with a list of US senators who personify not only the triumph of US democracy, but also the turnover of power. We are talking about senators, whose age is deeply retirement, but this does not prevent some of them from remaining in the senatorial seat for 20-40 (!) Years. The 25 members of the US Senate are aged 70 years old, of which seven are older than 80 years. 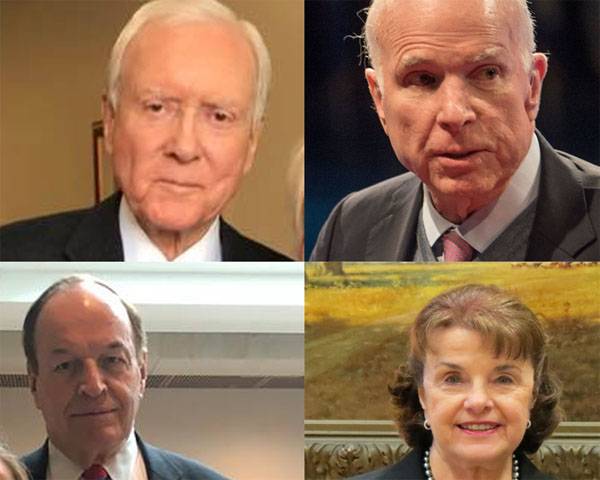 A number of US senators are hereditary politicians. For example, talking about Senator Kennedy and Merkauski. Some senators, including Michael Lee from Utah, moved from the American religious organizations to the current seat. That same Lee was a Mormon missionary in Texas for several years. This means that the church in the USA is certainly separated from the state ...

And why we, in Russia, are surprised that the US Senate is so hostile towards the Russian Federation. In fact, the answer is obvious. In the US Senate, politicians who drank champagne or whiskey for the collapse of the USSR "entrenched themselves". And then suddenly Russia, which was “buried” in 90, under Yeltsin’s dances, began not only to give a voice, but to interfere with the United States, which considers itself to be winners, in carrying out their geopolitical intrigues. The "winners" were furious. Even if many hearts play tricks on them, they clearly do not want to leave the “throne”, having lost the won “victory” over the geopolitical adversary from their hands.
Ctrl Enter
Noticed oshЫbku Highlight text and press. Ctrl + Enter
We are
European pensions: some numbers
Military Reviewin Yandex News
Military Reviewin Google News
89 comments
Information
Dear reader, to leave comments on the publication, you must sign in.