April 20 2018
177
Movies before the war, in which I.V. Stalin was a producer, financier, editor and even partly co-author of the script (Stalin's changes to the script of the film “Chapaev” by the Vasilyev brothers preserved in the archives, 5 took place on November 1934), brought to us the image of the accountant as a person envious and narcissist, in round glasses . And while the heroes of the first five-year plans built factories, mined coal, herded sheep and swung across the North Pole, the meticulous cinema accountant knocked on accounts and wove intrigues on the collective farm board. 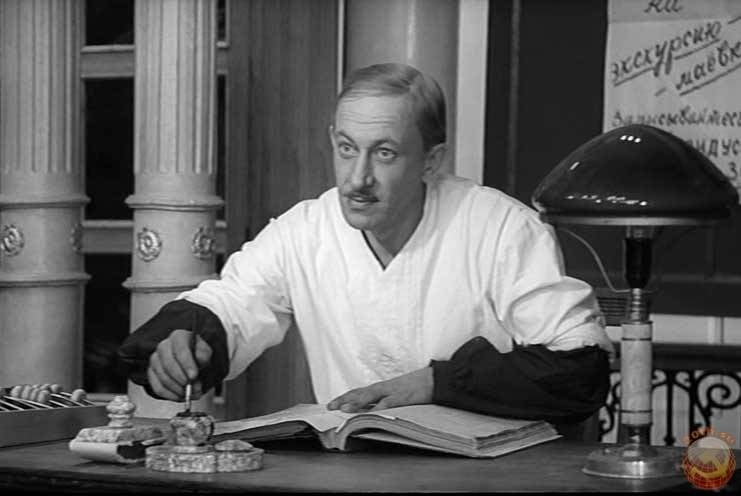 Now this quality is considered positive for a person. But the word comes from the Roman "skurpulus" - a small pebble. The Romans walked in sandals, and the pebbles fell into the shoe. It hurts, unpleasant, uncomfortable. Roman had to unleash their ancient bots, shake out a pebble. Sayings even were: a minor problem, like skurpulyus - I took it out and forgot it.

And now, if you please, see, an accountant in motion pictures is a scrupulous man with glasses, not a hero and not a lover. But Stalin and in people understood, understood and in money.

The first five years were a time of frantic construction. In 1928, the liberal "New Economic Policy" was curtailed and the country moved to planned, industrial development. In 1930, almost 1500 industrial enterprises were laid. A number of giant transport and industrial structures were built: Turksib, Dneproges, metallurgical plants in Magnitogorsk, Lipetsk and Chelyabinsk, Novokuznetsk, Norilsk, as well as Uralmash, tractor plants in Stalingrad, Chelyabinsk, Kharkov, Uralvagonzavod, GAZ, ZIS (modern ZIL) and In 1935, the first stage of the Moscow Metro opened with a total length of 11,2 km. No private capital could finance such construction projects. Yes, and now can not. Besides the shopping center, divided by partitions into stalls and shops, the liberal nepman cannot or does not want to build anything. He only dreams about a candle factory. Stalin and the Bolshevik Party resolutely embarked on the task of reviving industry, relying on domestic resources and domestic national debt.

By 1932, the country stopped importing tractors from abroad, and in 1934 began exporting them. In 1933-34-ies, people said goodbye to the sandals. In the film “The Dawns Here Are Quiet”, a young Komsomol member looks at the army foreman who, in the wartime, in the swamp, weaves a bast for her. Looks like Darwin at the gorilla.

Capital investments in heavy industry almost immediately exceeded the previously planned amount and continued to grow. There was a sharp increase in the issue of money, which led to an increase in prices and a shortage of some consumer goods.

Throwing a picture of the great construction projects with a zealous look, the Council of People's Commissars of the USSR adopts a Resolution of September 3 1934 of 2050: “On the termination of non-project and immortal construction”.

In which it is literally said: to prohibit 1 from October 1934 construction and financing of individual parts of industrial and transport construction projects (separate workshops, buildings, etc.) that have technical designs and estimates, if there is no approved project and estimates for the entire construction.

For especially large objects, the list of which is approved by the Council of People's Commissars of the USSR, allow the construction and financing of individual parts with technical projects and estimates, if there is an approved master plan for the entire construction.

You see, horseless! What does it mean? The main thing for the country was to build, run into operation. Industry. Production. Steel, cement, coal. Six years of general construction virtually no projects and estimates. With technical, purely estimated, approximate estimates. Built all without a tedious accountant.

Now everything is different. Cosmodrome "Vostochny" was built with beautiful estimates and projects beautifully liberal companies. How much was stolen? Lot. How many scandals, how many prisoners - not for me to tell you! How will it all end? God knows. Liberalism in fashion.

They were stealing and stealing on drums of Soviet construction sites under the accordion and with a whistle. Cooks in white plowing sites, old royal ministerial dachas with new business executives. Personal cars with drivers, horse races in Pyatigorsk, on which crazy money was burned - everything was there. Koreiko's millions, for whom Ostap Bender hunted - all this is our living история. When they tell you about a relative, an innocently injured construction director of a large and beautiful bridge across a Siberian river, remember “Vineless and non-project construction.”

In 1935-37, unsmiling scrupulous guys in sleeves and glasses started issuing “on the mountain” cases of financial violations. The NKVD and the prosecutor's office whistled from surprise, from the scope of the theft, from the posts of those involved. We had to plant and shoot. Planted and shot. Not wanting to discredit Soviet construction, many "sewed" political articles. Respectfully looking at our repressions, in the United States, Al Capone was imprisoned for tax evasion, and in a short time the mafia was driven by the scrupulous guys into the underground.

In the same 1933 year, December 8, the Council of USSR People's Commissars issues Resolution N 2652 “On the responsibility for the production of poor-quality products”.

It is so beautiful that we give it completely:

“Despite the steady growth of state-owned products and the progress achieved in mastering new technology, the criminal-negligent attitude to the quality of the products produced by the managers of individual enterprises and business organizations has not been eradicated. The production of poor-quality or incomplete machines, as well as the production of poor-quality parts and materials from adjacent factories, causes significant damage to the state. Particularly intolerant and criminal is the release of substandard and incomplete products by enterprises working for the needs of the country's defense.

1. To establish that managers of trusts, directors of enterprises, and persons of administrative and technical personnel who are guilty of releasing low-quality or incomplete products, are brought to criminal responsibility with the use of a measure of judicial repression - imprisonment for at least 5 years.

2. Instruct the procuracy of the USSR to ensure the steady implementation of this Decree. ”

Not less than five years old !!! Not less. It would not be bad to recall the failures of Roskosmos in recent years. Maybe because of the failure that the sensor on the rocket can now be put upside down and, for fidelity, to hammer on it with a sledge hammer. And nothing, in fact, will not. When conducting welding, you can manage to burn a submarine. Or the data is incorrect to enter in the flight mission.

The scrupulous guys from the military acceptance sent a large number of “managers of trusts, directors of enterprises, and administrative and technical personnel” to the plank beds, providing labor for the construction of five-year shock plans. All the sufferers who were digging up the “White Sea Canal” were included in the lists of illegally repressed people, and for the most part were found to be innocent, who were in 60, and who were in 90, of the last century.

The experience of fast, incalculable, large-scale construction was useful in the Great Patriotic War. In 1942, the country lost the Donbas mines and experienced an acute shortage of coal. The State Defense Committee allowed the construction of the Karaganda coal mine without a design task, projects and estimates for individual rates, approved by the NKVD of the USSR of the Main Directorate of rail camps (GULZhDS) in coordination with Prombank. Established the volume of investments in 1943 in the amount of 30 million rubles and ordered the People's Commissariat of Finance (NKF) of the USSR Comrade. Zverev make the necessary funding. And this case is not an isolated one. It was necessary to do business. When they say guns - an accountant shut up. 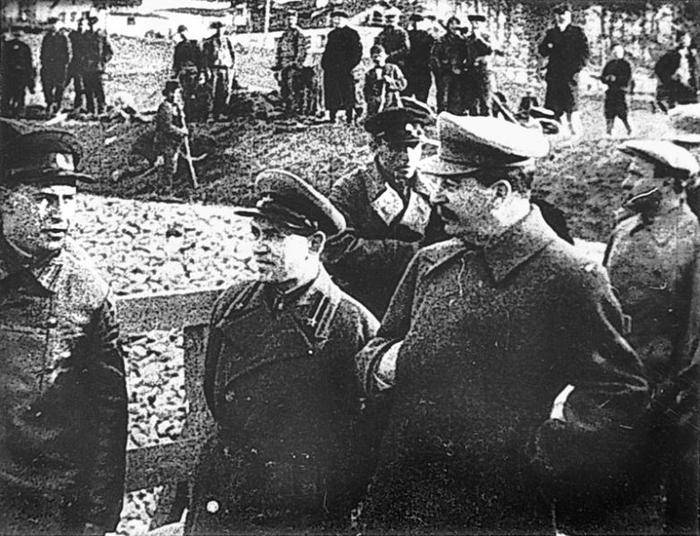 After the war, the state set a clear bar for lovers of fumbling in the state pocket. It was possible to get shot at for 10000 rubles, which corresponded to the price of a Volga executive class car on the black market. Officials lurked and unscrewed for themselves small bribes. This experience in the regulation of bribery, since there is no hope of eradicating it, can be learned even now. It is necessary to be more modest, to think about the people at least sometimes. On industrialization and agriculture to reflect. You need to look closely at large projects, and let grandma look after grandma who trades in the bazaar selling goat milk and parsley.

Russia is on the verge of a great discovery. The discovery of simple truth - the country needs a new industrialization. Must grow fixed assets. The sooner this is understood in the Kremlin, the better. Polite, smiling, scrupulous guys with glasses and contact lenses working in the Accounts Chamber of the Russian Federation have long ago dug up a huge pile of documents telling about embezzlement, registry alterations, estimates and other things that accompany the construction of airfields, stadiums, bridges and other objects of the national economy . It's time to plant, pre-weed. And then on a clean, beautiful and confiscated field, to grow a beautiful garden for future generations. 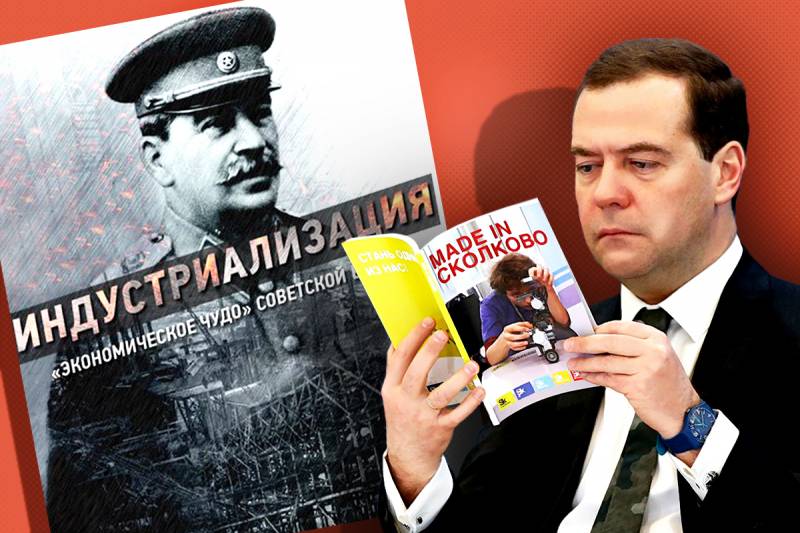 Ctrl Enter
Noticed oshЫbku Highlight text and press. Ctrl + Enter
We are
About Stalin and KhrushchevTales of Chapai ... or how history is ridiculed
Military Reviewin Yandex News
Military Reviewin Google News
177 comments
Information
Dear reader, to leave comments on the publication, you must sign in.