April 18 2018
38
Now we know that the collective West consists only of the United States, Britain and France, who unconditionally took part in a missile attack on Syria on a false chemical reason, "highly-likely", the rest of the western countries are unreliable vassals. So collapses Pax Americana. Yes, everyone is a little scared, and especially to the Americans. 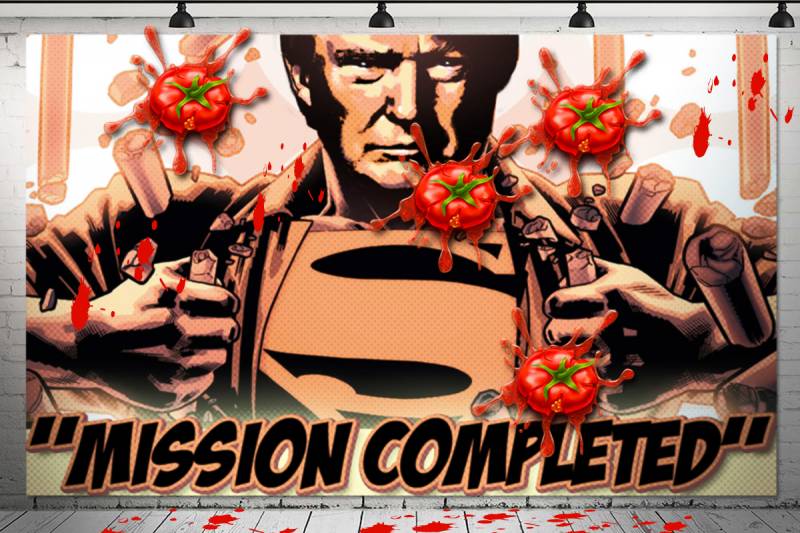 “The brutal silence of Russia,” as some observers say, referring to the pause that followed the announcement of “grave consequences” after any attack on the Russian Federation’s armed forces in Syria, sobered the American commander Dunphor, through him “Mad Dog” (Defense Minister Mattis) and President Trump. Probably in that order.

Russia put its VKS into combat readiness, showed that it was ready to fight, and the United States got scared. The upcoming crushing blow to Syria, as it was served by the American media, was transformed into a “ballet in a minefield”. This US attack on Syria was about twice as large as the number of missiles last year’s attack on the Shairat airbase, but the damage from it turned out to be even smaller, it is almost negligible. This time, no one died of the Syrian soldiers and civilians.

The main target of the US strike was the Syrian air force, but all the operating Syrian air bases were 100% protected: were all missiles fired at them shot down by Syrian air defenses or not only by Syrian airplanes? In principle, it does not matter. According to General Rudsky, all of the 103 missiles launched were hit by 71, or 68 percent - this is a missile attack failure and a high air defense result.

Militarily, the United States did not make sense to launch a missile attack on Syria’s air bases. Militarily, there was a sense of beating on the Russian Aerospace Force of the Russian Federation, and such scenarios were being sent to the world media. Because the United States cannot inflict serious damage on the government of Bashar al-Assad as long as the Russian Aerospace Forces are in Syria. But Russia said about the "grave consequences." And that's all. Want to fight - please, the Syrian platform of Russia is suitable. Therefore, Russia was "cruelly silent": if the situation slides to a big war, then the responsibility will fall on the organizers of this rocket attack - the United States, and Russia will be untied for retaliatory actions.

The possible purpose of this US missile deterrence operation was to force Russia to leave Syria, so the world media did not deny that the target could be the Russian VKS to force Russia to obey the US dictatorship in the Middle East and everywhere else.

In other words, the goal of the United States in Syria is Russia, while Assad is a cover figure. Moscow sees this perfectly and speaks of "grave consequences" for the United States. Because it is unacceptable for Russia to turn Syria into a pro-American extremist bridgehead in order to put pressure on Russia from the Caucasus. For Russia, the transformation of Syria, in fact, into a “second Ukraine” is not acceptable.

The American strike that occurred militarily was more likely to be in the hands of Moscow. It turned out a sort of rocket shooting range: Syrian air defense, with the help of Russian, shot at the US missiles, as they shoot at a dash on a plate with a gun. The United States trained Russian air defense for free. Without a subsequent ground operation, all air strikes are still a big shooting range.

In general, since the entry into Syria of the Russian Aerospace Force of the Russian Federation, the situation in the region has worsened for the United States. They, in fact, lost Turkey, and Russia acquired the Russia-Turkey-Iran alliance. The Russian Aerospace Forces mastered the region, the Syrian state gained strength. Further, the position of the United States in the region will only deteriorate, so this attack in Syria, Washington initially may have raised the question: now or never! It turned out - how it happened. Trump hurried to sum up: “The mission is complete!” But ... Special Prosecutor Muller’s investigation into Trump’s conspiracy with the Kremlin was investigated by 103 with cruise missiles from Trump!

It is said that the Syrian conflict is identical with the Caribbean crisis. This is unlikely, the latter was fleeting, had an obvious reason: the deployment of missiles by the opposing sides in Cuba and Turkey, so it was quickly resolved. The Syrian crisis is not resolved, but is drawn into a tighter knot. It resembles the time before the Second World War, it is more like a civil war in Spain, a forerunner of future major military events.