Pompeo knows how to turn America into Pompeii

April 13 2018
22
The new US secretary of state introduces his fellow citizens into a dangerous delusion, telling tales about the possibility of killing Russians with impunity. 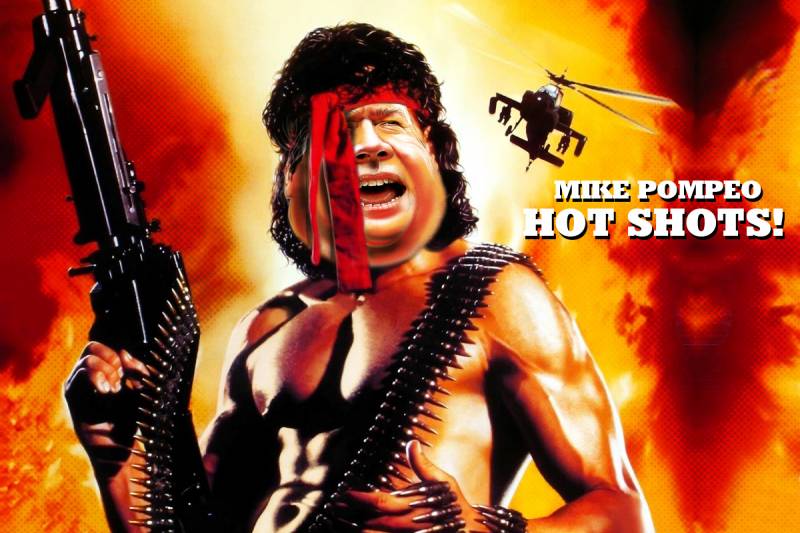 On the eve of many Russian media resources quoted the statement of the US Secretary of State, former CIA Director Mike Pompeo, about the death of "a couple of hundred Russians" in Syria:

“In Syria, a few weeks ago, the Russians met a worthy opponent. [As a result of this collision] a couple of hundred Russians were killed, ”Pompeo said. What kind of incident he is talking about, the head of the Central Intelligence Agency did not elaborate, noting, however, that all Russians were killed by the US military. ”

Since this news Mostly, the media picked up a completely specific focus, the main emphasis, naturally, was made on the most roast fact, which, they say, does not fully fit in with the “obviously understated” Russian official data on the losses of Russians in Syria. Including in the course of the notorious clash under Deir ez-Zor.

At the same time, the indicated media were either out of negligence, or intentionally missed what is undoubtedly the main “message” for which Pompeo most likely decided to recall this already forgotten, against the background of rapid events stories.

The fact is that the American leadership in the process of understanding the situation around Syria and making optimal decisions from his point of view, clearly faced a problem, about which it is customary to say: the spit found on a stone. What a couple of days ago told usually well-informed "Los Angeles Times":

“The Pentagon’s planning teams are ready to respond to the alleged chemical attack in Syria, but one danger is of particular concern - will the Russian military die on Syrian territory during air strikes, which will cause the regional war to develop into a confrontation between Washington and Moscow?”

The risks associated with the almost inevitable losses in the case of American missile-bombing of Syria among Russian military personnel cannot be ignored by the American military officials, whose actions now literally depend on the fate of the whole world and the United States. It is obvious that the unresolved nature of this problem was one of the main reasons why the Washington administration refused to immediately strike Syria. Moreover, Moscow does not find the slightest desire to “respect” the American partners and free the objects of future attacks from the presence of their military advisers. By the way, there have literally just been reports of the deployment of units of the Russian military police in the Eastern Guta - potentially one of the most "rocket-dangerous" sectors of the Syrian territory.

Against the background of a stormy debate on the subject in the ruling circles of the United States, Mike Pompeo suddenly appears with his recollection of the massacre of Russians by the brave American military that allegedly took place in Syria.

Even if he blurted it out purely by stupidity or for a bunch of words, even then this statement in the current context of events would be read quite clearly.

Pompeo, obviously, thereby tried to remove those fears and phobias that now clearly dominate in Washington over the threat of a direct collision with the troops of the Russian Federation. He actually says the following. In the destruction of the Russians, including quite massive, there is nothing special. So we killed "a couple of hundred Russians" in Syria - so what? Heaven fell to the earth? No, do not fall!

It is highly unlikely that this Pompeo really thinks that Russians can be killed by the hundreds and with complete impunity. Nevertheless, he is in a hurry to give the appropriate installation to the rest of Washington officials. Apparently, so that they are not too mandated about the Russian response.

Pompeo is not a fool. Those in the state secretaries, even in today's America do not take. But, undoubtedly, an experienced provocateur. What a special service of such a rank simply cannot be.

He himself, never doubt it, knows perfectly well that there was a Russian answer for the attack near Deir-ez-Zor. Yes, even what the answer! The largest terrorist enclave in the Damascus area is Eastern Guta, the last, so to speak, hope of Washington in Western Syria, after which the American attack was trimmed by Syrian and Russian troops to a samovar brilliance and is now called nothing but a new liberated territory of Syria.

But Pompeo quite deliberately avoids this dangerous topic. Because the main meaning of his "message" is the opposite - to show that it is common for Americans to kill Russians in any quantity, that they are already doing quite well in Syria. And, therefore, there is no reason to consider this topic a new one that deserves attention and, especially, to take it into account when making decisions.

It is quite obvious, however, that the conclusion to which Mike Pompeo is thus pushing his American audience is wrong neither in fact nor in substance. Because in fact, in such cases, the answer of the Russians, and an extremely tough answer, follows inevitably. And there is no doubt that it will continue this way. And people like Pompeo are well aware of this. The fact of the matter is that they are ready to go for the exacerbation, knowing full well the possible consequences. Apparently, in terms of the logic of their business plans, the goal in this case justifies not only the means, but also the risks. And since the risks are such that in the history of mankind has not yet been, it becomes clear that the situation of the United States or, in any case, of the circles to which Pompeo itself belongs, as they say, worse than the governor’s. So they embark on all grave, because they have no other way to solve their problems.

By the way, one of Mike Pompeo's predecessors as US Secretary of State, Alexander Haig, once stunned all of humanity with an ominous phrase: “There are more important things than the world!” It seems that the new US Secretary of State professes the same deadly philosophy. But this time - deadly for America itself.

Ctrl Enter
Noticed oshЫbku Highlight text and press. Ctrl + Enter
We are
Situational analysis of the death of the MH17 flight (Malaysian Boeing 777), made on the basis of engineering analysis from 15.08.2014CIA and American Holocaust
Military Reviewin Yandex News
Military Reviewin Google News
22 comments
Information
Dear reader, to leave comments on the publication, you must sign in.