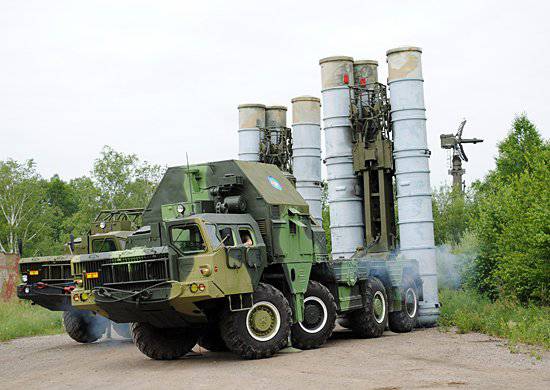 The management of OJSC “Moscow Machine-Building Plant Avangard” conducted a press tour for correspondents of federal media. The journalists had the opportunity to personally familiarize themselves with the production and technological process of the leading enterprise, which is part of the Concern Almaz-Antey Air Defense Concern, and which produces anti-aircraft missiles for long-range and medium-range air defense missiles. During the inspection of the enterprise’s workshops, the main guide for journalists was Gennady Kozhin, General Director of the Avangard plant.

The beginning of the century, the company met in the literal and figurative sense in ruins. All this was a consequence of the so-called restructuring and the negative events of the 1990-ies, which led to the loss of the sectoral management system. The plant, which was recently considered the leading one in the production of C-75, C-125 missiles, was idle without a state defense order. Financing was practically reduced to zero, the enterprise died and was actually on the verge of bankruptcy.

The stabilization and gradual restoration of the plant, said Gennady Kozhin, has occurred since its entry into the Almaz-Antey Air Defense Concern OJSC. It was created in 2002 year in accordance with the decisions taken at the highest state level. The new structure included 46 enterprises: plants, research and production associations, design bureaus and research institutes that were engaged in the development and production of small, medium and long range anti-aircraft missile systems, the main types of radar reconnaissance radar and automated control systems . With the help of the Almaz-Antey concern, they reorganized the enterprises, left bankruptcy, and managed to protect production facilities from the onslaught of various so-called shadow governments. Today the situation is changing radically. The plant in terms of production has not yet reached the level it had during the Soviet era, providing air defense troops, but in terms of the capacity of production sites it is suitable for it.

The plant's general director, Gennady Kozhin, complained that recently there appeared materials in the media that expressed negative judgments about the efficiency of the enterprise and predicted an irreversible crisis. According to his assessment, there are problems, but they are solved and have a working character with positive dynamics. Some journalists joked that the press tour to the previously closed enterprise was caused by the desire to visually refute the “negative”.

In the framework of the Federal Target Program for the reform of the defense-industrial complex in the 2011 – 2020 years, for technical re-equipment, the Avangard plant will receive almost 2 billion rubles.

These funds are already planned, and up to 2015, approximately 1 billion. 200 million rubles. will go for the purchase of equipment, more than 600 - for construction work to upgrade the infrastructure of the plant, which is engaged in the production of missiles for anti-aircraft missile systems C-300 and C-400. Kozhin noted that the plant currently spends about 100 – 120 million rubles. per year on equipment upgrades.

In the past two or three years, the plant has improved many technological processes. New materials are applied, technical re-equipment, modernization, re-equipment and reconstruction of production sites are carried out. Prior to that, for the reasons mentioned above, the company worked on a machine park made in the 1970s of the last century. Now the company has a profitability of about 6%, and in the future it will increase due to the modernization of equipment. Due to technical re-equipment it is planned to significantly increase labor productivity and profitability of production. Together with the concern, almost all issues related to technical re-equipment are solved. The Avangard Innovation Center was created on the basis of the enterprise with the involvement of Bauman MGTU.

The situation in the field of production volumes is changing dramatically. Last year Avangard signed four- and five-year contracts with the Russian Ministry of Defense. In the next few years, MMW will be the only supplier of ammunition for the C-400 Triumph anti-aircraft missile system. As the general director explained, "so we are loaded with orders at least until 2015 of the year." In comparison with 2003, the company had a total increase in supply almost 40 times.

As part of this year’s state defense order, 2 February has received advances, production of anti-aircraft missiles for C-300 and C-400 has already begun. The contracts provide for an annual increase in the volume of shipments of the latest missile modifications. Recently, the volume of production of anti-aircraft missiles delivered for the needs of the Armed Forces of the Ministry of Defense of Russia has exceeded export deliveries.

The production site on which the assembly of anti-aircraft missiles is performed looks quite modern. A sense of comfort is caused by the so-called mirror floors, the cleanliness, the average temperature that is constantly maintained in winter conditions + 23 degrees. Employees of the company this feeling most of all cause rows of neatly decomposed transport and launch containers and missile compartments in varying degrees of readiness. They serve as a visual demonstration of the volume of work performed in the near future.

By the decision of Kozhin, journalists, among other things, were shown (without the right to take photos and videos) a number of points considered key in the process of assembling a rocket, which has a huge potential inherent in its very design.

In the technological cycle of creating a rocket, the most time consuming part is its filling. The process is also very complex and specific. Kilometers of electric bundles, hundreds of different assemblies, attachment points of various elements of an anti-aircraft missile. Any error, malfunction in the electrical circuits or circuits will lead to failure, failure in the performance of the rocket. The military is very tough to assess the quality of work, and when the rocket does not go where it was needed, they put up serious fines.

Therefore, the MMP has a strict product quality control system: input control, checks at each stage and final control. Each such check is recorded and executed as a legal document. “We also expose penalties to accessory companies,” continued the CEO. - If the product does not pass the control, then I will send the complaint and penalties.

After the assembly is completed, anti-aircraft missiles are transmitted to the test station (CIS). Here check the correctness of the connection of all electrical connectors and components. After that, it is rolled into a container, and it passes the next test in the ICC. This time for tightness. TPK is immersed in a special bath filled with water. Bubbles appeared on the water surface, which means rejects. Upon successful completion of this test, the anti-aircraft missile is no longer subject to any checks. In the troops with it, only two cycles can be performed: preparation for launching or reorganization according to letters. Routine work for the entire storage period of the product, and this is not less than 10 years, is not performed.

The construction of two plants in Kirov and Nizhny Novgorod for the production of air defense missile systems from the general director of Avangard does not cause any concern about the future prospects and the fate of the enterprise. Today, the number of orders is such that the management does not exclude the introduction of the second shift. From this year, work is planned with suppliers ahead of schedule in order for the 2013 program of the year to begin at Avangard and allied companies already in the second half of this year. On some problems, especially on scientific and technical developments, they have already created a reserve for 2014 – 2015 years.

The troops are very intensive training process. More training is conducted. According to Gennady Kozhin, after 2015, even taking into account the commissioning of the new plants of the Almaz-Antey Concern, all the production areas will be loaded to the maximum. In addition, Avangard MWF is engaged in the production of missiles for state tests and pilot batches when creating new complexes or upgrading existing ones.

“We are the“ heads ”, our products will always be in demand,” the head of the MMP believes.

WE HAVE WHAT TO HIDE

For domestic systems C-300 and C-400 very strong interest abroad. Some are planning to buy them, others - to find out secret information, and others are attracted to constructive solutions relating to the category of intellectual property.

The general director of the plant said: the company had problems with the protection of intellectual property rights with China and Israel. At the same time, Kozhin doubts that foreign powers will be able to copy Russian C-300 systems and missiles to them. “We have such moments that, in general, it will be very difficult to reproduce in principle, and no China will ever create a semblance of our rocket,” he said. In addition, the access of foreign representatives to the assembly shops of the plant is strictly prohibited.

Chinese designers managed to create their own HQ-9 complex, which is an approximate copy of the Russian C-300. "This analogue - it is the Chinese analogue, it does not look like three hundred," said the head of the company.

The PRC is one of the main consumers of Russian weapons and, in particular, air defense weapons. In 2010, the Almaz-Antey Concern fulfilled the contract for the delivery of the X-NUMX C-15 “Favorite” air defense missile systems to China. A year later, the Federal Security Service accused Chinese citizen Tong Shengyun of trying to collect, for a monetary reward, data on “technological and repair documentation on the C-300 anti-aircraft missile system containing state secrets.” It is assumed that the accused acted on the instructions of the Ministry of State Security of China under the guise of an interpreter for official delegations.

Domestic complexes in general have several advantages when compared with the MIM-104 Patriot. Our three-hundred and four-hundred within five minutes are transferred from the traveling position to the combat position; in the American it takes half an hour. In the conditions of modern war, this is a significant factor, because the mobility of the system is a very important moment in ensuring its survivability.

Other advantages lie in the fact that the Russian complexes are provided with a vertical start with a further defeat of the target with an anti-aircraft missile in azimuth to all 360 degrees. On the American Patriot, the launch zone of the rocket in azimuth from 0 to 180 degrees and oblique launch is 38 degrees.

The head of Avangard called the statements of the so-called media experts stupidly stating that there are no long-range anti-aircraft missiles for the C-400.

If the first C-300 SAM missiles had an 75 km range, today one of the modifications of the 48Н6 anti-aircraft missile hits targets at a range of 250 km. According to Kozhin, its potential is 320 km. The mentioned model range is adapted both to C-300PM and C-400 complexes.

The system C-300 were 55-th anti-aircraft missiles. After a deep modernization of the complex, they were replaced by a common series of new products 48H6. They are by far the best in the world. “Now we have a contract for a new long-range missile and are implementing it,” he said.