April 12 2018
32
The actions of the American administration on the Syrian-Russian direction cannot be described in terms of a consistent and well-thought-out policy and are more similar to the contradictory result of the bitter domestic political struggle in the United States. 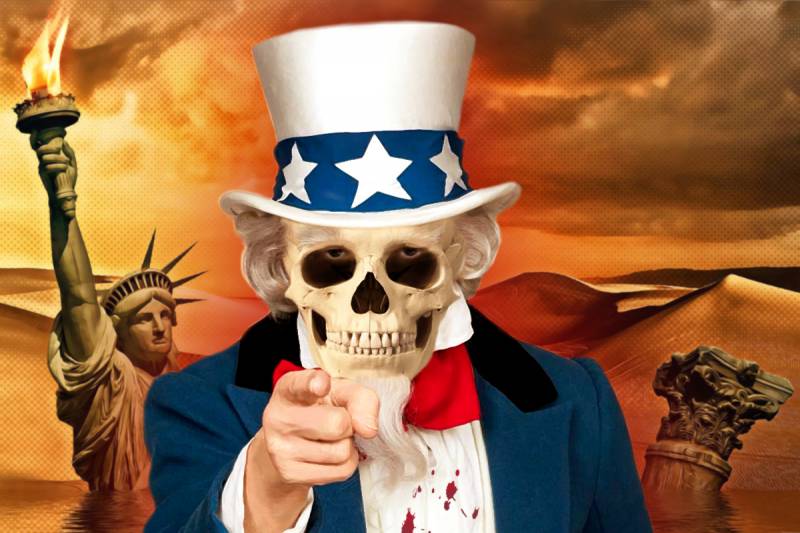 While the Russian media space is filled with gossip about the “dramatic consequences” of the new American sanctions and a discussion of the chances of the Russian military in Syria to resist the “overwhelming power” of America (typical headlines: “The new American bill rolls the ruble into the floor” and “The Russian Air Force is powerless before Donald Cook ”), much less attention is paid to the situation in the opposite“ trench ”. And some people, it seems, generally proceed from the fact that we are faced with a sort of monolithic American force, which is systematically moving toward its clearly defined goal.

But is there any reason for such an excellent assessment of the state of a probable enemy? The facts of the last days say rather the opposite.

Firstly, it is absolutely clear that the course taken by Washington to maximize confrontation with Russia is in itself very dangerous for the United States itself and cannot but be the cause of the most serious concern both in American society and in its ruling elite. The complete unpredictability of the military-political situation is by no means the “business plan” in which practical Americans are willing to make real investments.

Therefore, it is not at all surprising that at the time of adoption of such “historical decisions ”at the Washington Olympus, an intensive personnel leapfrog continues, which in no way can be characteristic of a single and purposeful team. In the last month alone, three key persons responsible for shaping American foreign policy have already parted from their posts: Secretary of State Rex Tillerson, US President's National Security Advisor Herbert McMaster, and just yesterday the President's Adviser for Homeland Security and Counterterrorism Thomas Bossert.

Moreover, it is far from a fact that these personnel replacements reflect a kind of common general line. If, for example, experts almost unanimously assessed McMaster's resignation and replacement of him by John Bolton as a sign of a tightening of the anti-Russian course of the White House, then the picture with Tom Bossert is not so clear. This politician is known as an ardent conservative and opponent of rapprochement between Washington and Moscow. In addition, attention is drawn to the fact that this resignation followed literally the next day after his statement that “the US administration allows any options for developments in Syria.” And although Donald Trump says about the same thing, the difference is that the president may not like the dominance of frank hawks in his administration.

Not less questions cause American actions in the military field. For example, many probably noticed that the attack of the Israeli F-15 heavy fighter-bomber on the Syrian airbase T-4 occurred at the very moment when the tension of the militaristic hysteria in Washington reached its peak. It is for this reason that many initially perceived this operation by Israel as an American attack.

There is no doubt that such extreme actions of the Israeli Air Force in such a tense moment could not possibly be their independent action. Moreover, they were supposed to be not only coordinated with the United States, but could take place only at their urgent request. The reason for such a “fire” could be only one: the American command immediately needed to open the enemy's air and missile defense system in Syria, in order to reconnoiter their own strike.

Moreover, the situation was so acute and the data was needed so urgently that Israeli pilots were ordered to take a chance at the very moment when the Syrians and the Russians were already waiting for the strike and were in a high degree of alert. Do not be in such a hurry, it was quite possible to carry out this reconnaissance raid after only a couple of days, and not at the very moment when Donald Trump announced that the strike was about to take place.

But it seems that in those hours, at a hectic pace, the US military command was preparing for an immediate missile attack if ordered by its president. Even despite the fact that the grouping of forces and means of the US Navy in this area for a massive rocket attack was clearly insufficient.

Ultimately, these blows have not yet taken place. Probably because of the latest zigzag of Washington's strategic thought, which suddenly realized that there was really nothing to fight in Syria at the moment.

What does this mean? Either that the American actions on the Syrian track is one continuous improvisation, or the resulting fierce internal struggle, which continues to this day.

A clear sign of the inconsistency and improvisational nature of the American military-political maneuvers is the complete absence of the main American strike forces in the area of ​​potential combat deployment described by us the day before. fleet - its carrier formations. Even today, despite yesterday’s reports that the Harry Truman aircraft carrier was urgently dispatched to the crisis area, there are not a single large US naval strike force in the seas adjacent to Syria, at a distance of up to 5 miles.

The picture is more than strange, if we proceed from the well-known fact of the critical dependence of the US overseas military operations on carrier strike groups, and also assuming that the Washington leadership consistently implements some long-conceived, phased plan for Syria.

With such an assumption, the naval vacuum off the coast of Syria at the very moment, when the hysteria of the American military threats against this country reached its climax, at least looks illogical. If all of you planned this in advance, why haven't aircraft carriers flown so far? Or at least the staff ship of the Sixth Fleet. who is now traveling somewhere off the coast of Africa. And the haste with which they send the same Truman there, which will take a lot of time just to get there and which, in the singular, still practically has no significant military weight, suggests that this improvisation continues in non-stop mode.

It must also be recalled that this is generally typical of the entire policy of the current Trump administration. The course of Washington towards North Korea is characterized by approximately the same inconsistent advances. Which he is going to "wipe out of the face of the earth", then suddenly he is exploring the possibility of a friendly solution of all questions during Trump's personal meeting with Kim Jong-un. And this is only the most vivid example of dizzying American somersaults, from which the whole world is already tired.

Of course, the danger in the case of such an inconsistent, impulsive policy on the part of the opponent only increases. As in the classic case of a not very smart monkey with a grenade.

However, on the other hand, such a nervous behavior of the American counterpart, his permanent swaying from side to side are unlikely to be bad. news for Moscow. Because the more ado the enemy makes, the more mistakes he makes and the sooner he will achieve fatal results for himself. Because anger is a bad adviser, and revenge is a dish that is always served cold.