How Ravu Russian stormed. Part of 2

April 11 2018
10
By the end of the day of August 24, it became obvious to the Russian command that at the front of the main forces of the 3 Army the enemy had launched a decisive offensive (see the beginning of the article How Ravu Russian stormed. Part of 1).


The summary of the Supreme Commander’s Headquarters for 24 August, read: "In the area of ​​Rava Russkaya - stubborn battles with large Austrian forces." Performing a double task set by the front command led to the dispersal of the forces of the 3 Army corps, hampering their interaction. 9-th and 10-th army corps had to act when there was a constant threat of a breakthrough of the left flank of the 3-th army - from the Gorodok position.

The blow inflicted by the 11 Army Corps took him to the flank and rear of the Austrian forces defending the positions of Rava Russkaya from the units of the 9 Corps advancing from the south. An even deeper coverage from the side of the 21 corps (actually creating the outer ring of the environment) should have led to the complete and guaranteed environment of the Austrian group. The main forces of the Russian 3-th army were fighting at the front of Vyshenka-Magiruv-Rava.

The Austrian 4 and 3 armies, in turn, received the task of continuing the offensive against Lviv. 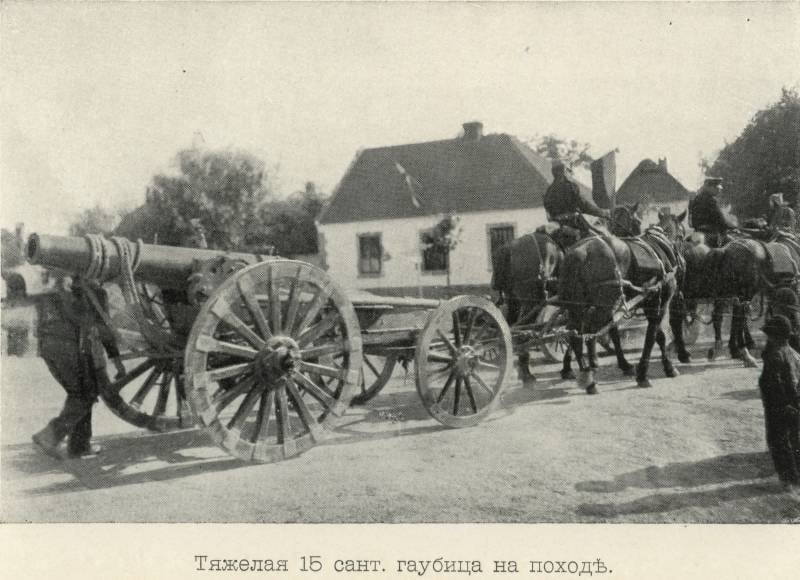 On August 25, the 11 and 78 I infantry divisions of the 11 corps continued to attack the Russian Rava (Zaborzhe-Sankovice), and the 32 I infantry division operated in the Univ-Mikhaylovka area to support the corps offensive from the north.

At Karuva, units of the 32 Infantry Division were fighting hard with the Austrian 3 Infantry Division occupying the area. Russian units again applied a workaround, forcing the enemy to withdraw. Despite strong support for 5 batteries, the battle developed hard. By the end of the day, units of the 32 Division lost over 500 men. The Austrian 3 division, despite the fact that it was weakened by the death on the night of the 24 on the 25 of August of the 2 of the Tyrolean rifle regiment, defended stubbornly and successfully.

At the front of the 78 Infantry Division, the enemy began to retreat to Ravu Ruska by 17 hours — Russian units pursued him to the ground. Senkovitsy. At the latter, having received reinforcements, the Austrians launched a counteroffensive, dropping part of the 5 division into the 78 km.

At the front of the 9 Corps, the 5 Infantry Division was advancing from the south towards Ravu Ruska in the direction of Lipnik, as well as units of the 58 and 42 infantry divisions from Magiruv to Monastyrek. The Austrians preempted the advance of the corps units by attacking the 5 Infantry Division. The latter, with the support of the units of the 42 Infantry Division, slowly oppressed the enemy. In the area of ​​the 58 division, the attack on the heights near Kamennaya Gora (the enemy was a unit of the 39 th infantry division), despite the support of the 9 batteries and parts of the 42 infantry division, was also unsuccessful. The Austrian rifle chains, on the contrary, acting from heights, gradually advanced on Magiruv.

The 10 Army Corps acted west of the Magiruv-Rava Russkaya road, starting to attack on the right flank (in the center and on the left flank, he defended himself). Corps divisions fought a serious battle with the upcoming Austrian 6-m and 9-m army corps.

After fierce forest battles, during which the “Goat Ridge” repeatedly passed from hand to hand, units of the 60 Infantry Division retained their positions along the ridge to 16 hours, but could not move forward. By 17, the enemy, pushing the inner flanks of the 60 and 58 divisions, pushed them to the western outskirts of Magiruwa - Biala. And between divisions formed 3-km gap.

The 21 Corps of August 25 attacked Lashuv-Unuv. He fought stubborn battles for the city of Radostav - tried to attack and beat off enemy attacks. The city was captured - in this part of the 44 Infantry Division, having lost 1034 man, captured 1,6 thousand prisoners (including officer 51), 24 guns and 3 machine guns. Prerequisites were created for action against the left flank and rear of the enemy attacking the 3 Army.

25 August, the 3 Army was in a difficult situation - its corps was divided into combat groups: the 21 Army Corps advanced far to the north and could not help the 11 and 9 Army corps, which was exhausted in the heavy battles of Rava Russkaya . 10-th Army Corps was shot down from p. Vereshchitsa, and his front is broken by Waldorf.

Without the help of the neighboring 8 and 5 armies, the 3 army could suffer a serious setback. The 12 Corps was returned to the 8 Army - and the latter was to capture the Gorodok position, securing Lviv and the actions of the 3 Army. And the 5 Army was to promote the 3 5 and 17 Army Corps (should go out north of Tomashev), and the Cavalry Corps (divisions - 7 and Combined Cavalry, 1 Brigade of the Don Cossack Division) was to act in the flank of the enemy, who defended by Rava Russkaya.

The Russian 3 Army concentrated in order to take possession of the Russian Rava, the power of the 3's right-flank corps (the 10 Army Corps was to provide the operation from the direction of the Gorodok position). In addition, the army had to eliminate a breakthrough at the junction with the 8-th army. 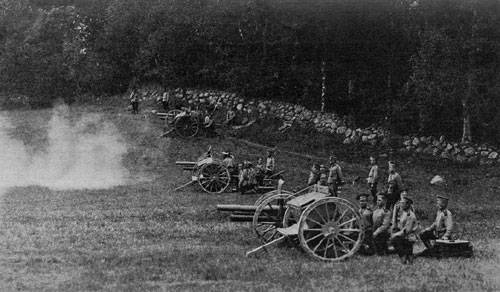 By August 26, the situation became even more complicated - the enemy developed a breakthrough from Walldorf, and a gap appeared between the 10 corps 3 and the 12 corps of the 8 army.

The Austrian 3-I army attacked the junction between the Russian armies, striking the corps of the inner flanks. The enemy managed to concentrate on this direction superior forces.

The battles of 26-27 on August for Ravu Russkaya became one of the hardest in the course of the Battle of Galicia. The Russian 3 Army waged a stubborn battle on the entire front: on the right flank its troops advanced, albeit with great difficulty, and sought to reach the Yarchev-Novoselki-Zaborzh line; The 21 Army Corps from the Radostav region attacked Telyatin-Lyubych. The enemy made a particularly strong onslaught at the front of Vyshenka-Mala Lelehovka (the junction of the 3 and 8 armies). The Austrians brought considerable forces into battle, trying to reach the inner flanks of both armies. To close the gap between the armies, the 11 Cavalry Division advanced to Krehov-Waldorf - it was assigned the task, acting in the combined ranks, to restrain the enemy, who was breaking through between the armies.

The 32 Infantry Division led an offensive along the railroad on the Grebenne-Rzhicki front, entering the flank of the enemy in order to promote the 11 and 78 infantry divisions. With a night bayonet attack, the Russians knocked out the Austrians from the trenches of advanced positions, but further advance was repulsed by powerful rifle and machine-gun fire. The 11-i and 78-i infantry divisions also went on the offensive - 11-i division on Charn, and 78-i division - on Senkovitsa.

The enemy in the sector of the 32 Infantry Division also tried to attack. 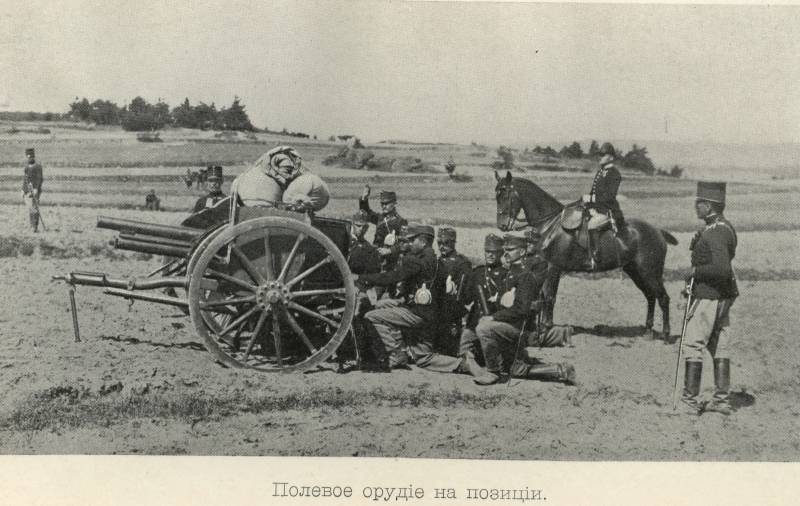 As a result, the attempts of the 11 Army Corps to take possession of the positions of the Rava Ruska by a blow from the east led to failure. Attacks from the front did not bring much fortified positions of success. The corps was entrenched, waiting for the approach of the 21 Army Corps, making a deep detour around the area of ​​Rawa Russkaya.

In the 9 Army Corps, the offensive against parts of the Austrian 19 Infantry and 41 Throwed Infantry Divisions also went sluggishly. The enemy, having strengthened groves, villages and heights, stone railway structures at st. Lipnik, kept under the powerful machine-gun fire approaches to his position - on the hills of Ravske Gol-Lipnik. Parts of the Russian 5 and 42 infantry divisions were slowly advancing, taking possession of the grove and some of the railroad buildings. station Lipnik.

In the area of ​​the Russian 58 Infantry Division, part of the Austrian 41 Throwed Infantry Division went on the offensive, but the Russian division retained its position, although it did not move forward. During the day of August 26, the 9 Army Corps advanced only 3-4 km.

The actions of the 9 Corps were limited to artillery fighting and in the elimination of a breakthrough at the junction with the 10 Corps in the area of ​​Byala.

The position of the 10 Army Corps significantly deteriorated - attacked by four divisions, on its left flank, he was forced to withdraw from the Vereshchitsa line and occupied the Byala-Maidan sector. On August 26, the 60 Infantry Division again launched an offensive against the Goat Ridge, and a brigade of the 9 Infantry Division launched an offensive from Hyshenka Velke. The Austrians actively opposed - owning the “Goat Ridge” (and holding down the 60 Infantry Division), they pressed the left flank and the center of the 9 Infantry Division at Vyshenka Male. The enemy began to bypass the left flank of the corps - he was opposed by the dispersed units of the 10 Caucasian Cossack Division dispersed in the 10-m and 12-m army corps.

Due to the threat of a breakthrough between the corps, the commander of the 10 Corps transferred the 31 Infantry Division from the right flank of the compound to the left - the extension of this division and the 19 Infantry Brigade stopped the withdrawal of the 9 Infantry Division.

The tense situation on the left flank forced the commander-3 to take measures to eliminate the breakthrough. From the night on 27 August 11-I (advancing on Waldorf by night march), 10-I cavalry and 3-I Caucasian Cossack divisions acted on the left flank of the 10-Corps - in order to localize the breakthrough between 3 and 8-th armies. In addition, a request was made to the command of the 8 Army to provide active assistance through the offensive of the 12 Corps.

On August 27, the Austrians continued their attacks on the 10 Corps. On the right flank of the compound, the 60-Infantry Division fought stubbornly with the 15 and 27-th Infantry Divisions of the Austrian 6 Army Corps for the “Goat Ridge” - the latter was repeatedly passed from hand to hand.

26-I, 10-I and 25-I infantry divisions of the enemy attacked the heights to the south of Vyshenka Male and north of Vyshenka Velka, having the 39-th drove infantry division in reserve. Moreover, parts of the 25 Infantry Division bypassed the left flank of the Russian 10 Corps, threatening it with a breakthrough and access to the rear of the corps.

But the stubbornness of the Austrian divisions was in vain - the Russian units on the left flank of the 10 Army Corps not only repulsed all enemy attacks, but also intended to go on the offensive. The concentration of the cavalry, which was consolidated into the Consolidated Cavalry Corps, made it possible to ensure the interface between the 10 and the 12 army corps.

27 August The 21 Army Corps, on whose maneuver the army command had placed such hopes, developed an offensive to the rear of the enemy - in the direction of Lubcha.

As a result, by the end of August 27, the Russian 3 Army held the following positions: The 11 Army Corps kept on the line of Art. Zelena-Zaborzhe-Guiche, awaiting the departure of the 21 Army Corps to the rear of the defensive line at Rava Russkaya from the north; The 9 Army Corps advanced to the Male St line. Lipnik-Pohorzheliska-Podlesie-height north of Magiruva-Byala; 10 Army Corps - in height Byala - Male Hys-Velke-Maidan Heights. The consolidated cavalry corps occupied the front between Mlynky and Waldorf, in the army reserve Dobrosin had the 11-I infantry division.

The troops of the Austrian 4 Army in the battles of 26-27 on August achieved success on almost the entire front. By the end of August 27, the Russian Rava continued to remain in Austrian hands. "Goat ridge" passed from hand to hand. The terrain was favorable for the enemy - and the Austrians created a strong defensive line in the forest and swampy defile in the 2 line.

Author:
Oleynikov Alexey
Articles from this series:
How Ravu Russian stormed. Part of 1

Ctrl Enter
Noticed oshЫbku Highlight text and press. Ctrl + Enter
We are
Weekly summary (30 January-5 February) on the military and social situation in the DPR from the military officer "Mag"Reports from the militia of New Russia for 27-28 September 2014 of the year
Military Reviewin Yandex News
Military Reviewin Google News
10 comments
Information
Dear reader, to leave comments on the publication, you must sign in.