Belarusian authorities are going to change the constitution

April 7 2018
176
The Minister of Foreign Affairs of the Republic of Belarus made, in fact, a sensational statement. According to him, the official Minsk is thinking about changes in the country's constitution in connection with modern geopolitical challenges. It is noteworthy that Vladimir Makei made such a statement in an interview with the information service Euronews.


From the statement of the head MFA RB:
Today we are thinking about a possible change of the Constitution. The situation in Belarus and around it has changed. Many new circumstances, conditions, challenges have arisen, and we must take them into account. Look at the situation around Belarus. First of all, we are talking about issues of stability and security: the crisis in Ukraine, mutual sanctions between Russia and the EU. In the economic sphere, we see almost economic wars, it is enough to recall the recent clashes within the framework of the Transatlantic Partnership ...
Calls are enough, and we have to take them into account. Therefore, we are thinking of improving some provisions of the Constitution. These changes will inevitably lead to the transformation of legislation in the economic, electoral and other fields. 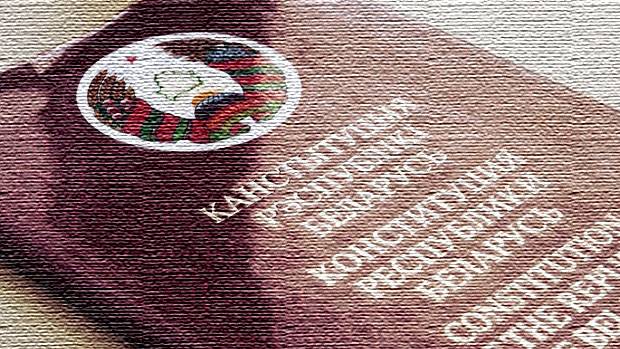 Unfortunately, today we are between two large geopolitical players: on the one hand - Russia, on the other - the European Union. In other words, at the moment we are between two "big lights" that are, let's say, in a state of hostility. We suffer from this. (...) At the same time, we believe that it is impossible to ensure stability here, in Belarus, without Russia or at the expense of Russia. Therefore, we do not recognize the question “with whom are you today: with Russia or with the European Union?”, But we want to maintain good relations with both Russia and the European Union. We understand that this is our destiny, the further development of our state depends on it.

Answering a question from a Euronews journalist about whether Belarus is afraid of the “Ukrainian scenario” on its territory, the head of the Belarusian Foreign Ministry replied:
We are not afraid of the implementation of the “Ukrainian scenario” in Belarus. We are somewhat different from the Ukrainians and will never allow the situation that occurred in Ukraine. We have good relations with Russia. If there are any problems, we openly discuss them with Russian partners. We are trying to find political, not military solutions to these problems. I don’t think that Russia would like to organize something like the “Ukrainian scenario” in Belarus that they want to do that. It is not in their interest. It seems to me absurd to even discuss these hypothetical things.

As you can see, the “Ukrainian scenario” is discussed exclusively through the prism of “actions” of Russia. Actions of the West, which became the main sponsor of the Ukrainian coup, are not considered.