How Europe turned into an American semi-colony

April 7 2018
37
Seventy years ago, on April 4 of 1948, the US Congress passed the Law on Economic Cooperation, which provided for the implementation of a four-year program of “aid to Europe”. In fact, the law passed by congressmen and signed by US President Harry Truman was the implementation of the famous Marshall Plan.


The Second World War radically changed the political and economic face of Europe. For the first time, under the de facto control of the “Russians,” as it was in the West, the Soviet Union was defined, the whole of Eastern Europe and half of Germany appeared, and there was a very high risk of communist victory in Greece. In France and Italy, the communist parties acquired enormous influence and gained enormous numbers — in France, the FKP consisted of 908 thousand people, and in Italy, about 2 million people. In proportion to the growth in numbers, the real political influence of the communists increased, which put Europe at risk of coming to power in France and Italy, if not communist, then mixed governments, which could be guided by friendly relations with the Soviet Union. Communists were held in the parliaments of European countries, participated in the creation of governments. It was a great breakthrough compared with the pre-war era and he could not help scaring the American elite. Europe experienced enormous socio-economic problems. The economic infrastructure of many European countries was destroyed by the war, Germany was under the occupation of the Allied forces and the Western leaders did not know what to do with it in the future.

Back in 1944, the then US Treasury Secretary Henry Morgentau developed a “Program for the Prevention of the Unleashing of the World War X by Germany”, which was called the “Morgentau Plan”. According to this program, Germany had to be dismembered, cease to exist as a single state, its industrial areas were placed under international control, heavy industry was eliminated and banned, and the armed forces were completely eliminated. Morgentau believed that the de-industrialization of Germany once and for all put an end to revanchist sentiments. However, after the defeat of Germany and subsequent political changes in the life of Europe, the situation changed.

12 March 1947, US President Harry Truman delivered a famous speech in front of the US Congress, outlining the key points of his plan, called the Truman Doctrine. The President stressed that totalitarian regimes imposed on the countries of Eastern Europe, promised help to Greece and Turkey, which were soon provided significant financial resources. But the core of the doctrine was the revision of the concept of Franklin Roosevelt and the pushing through of the concept of a “unipolar world,” in which the United States should play the leading role. After the defeat of Nazi Germany, the Soviet Union automatically became the key opponent and rival of the United States. 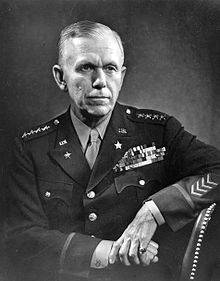 The Marshall Plan was in many ways a logical continuation of the Truman doctrine. Army General George Marshall, who served as Army Chief of Staff (Commander-in-Chief of the Ground Forces) during the war, 21 January 1947 was appointed US Secretary of State (Foreign Secretary). The Marshall Plan was based on the desire for US economic dominance, which could be achieved by gaining control over the European economy. The “unification of Europe”, about which the entire subsequent half of the twentieth century spoke so much, was the result of the Marshall Plan, which envisaged the destruction of customs barriers in Europe itself and the formation of a single European market. Also, customs barriers between Europe and the United States were to be destroyed, which provided American companies with European raw materials at low prices.

Of course, formally the American leadership positioned the new strategy as aimed at restoring the European economy. Almost all the countries of Western Europe suffered enormous damage as a result of the war, and this was true of Britain, which was not occupied by German troops. London spent 25 billion pounds on the war, the kingdom’s foreign debt increased threefold, and production fell by 20%, in some industries, by 30% compared to the prewar level. The UK was forced to introduce a rationing system for food. If this was the case in Britain, in whose territory there were no land battles, then one can imagine the extent of the economic crisis caused by the war in the countries of continental Europe. 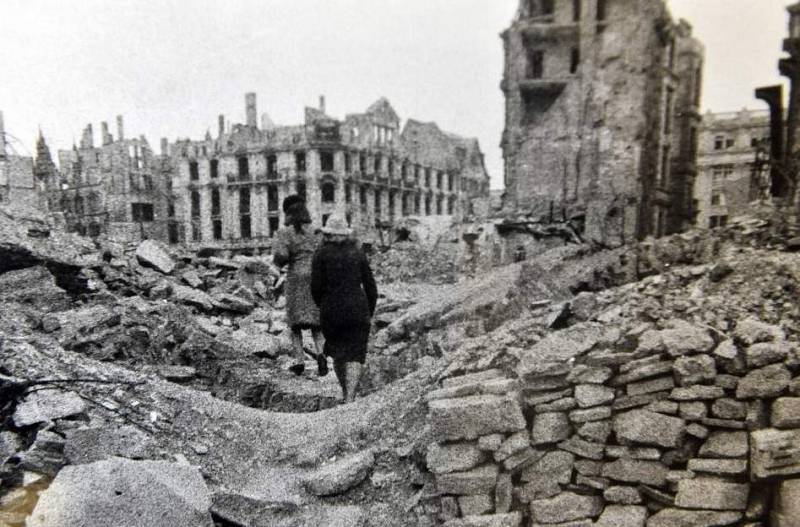 Germany suffered most of all, in which 5 million houses and apartments were destroyed, communications, enterprises and social infrastructure institutions were destroyed. In addition, more than 12 million refugees arrived from Eastern European countries and from the Soviet occupation zone in West Germany, controlled by British, American and French troops. This caused a further increase in unemployment and food problems, consumption of which was only slightly more than 60% of the pre-war level. Since before, grain and meat from Eastern Europe had been supplied to Germany, and now these supplies have stopped, the food supply of the population has deteriorated.

After the end of the war, European countries sought to quickly restore the destroyed industrial facilities, but the United States was not interested in this. Therefore, although Europe demanded that the United States supply industrial equipment, Washington did not supply the means of production, but finished products. At the same time, the main place in deliveries from the United States was taken by food — the surplus of the American agro-industrial complex, which had to be sold somewhere. Of course, the real recovery of European industry was not discussed.

Bilateral agreements concluded under the Marshall Plan between the United States and European countries provided for many obstacles to the free trade of European states that used American aid. Of course, the main restrictions were aimed at hindering trade with the USSR and the countries of the socialist camp. France, for example, did not have the right to import coal from Poland, the cost of which was then estimated at 12 dollars per 1 ton, and was forced to import expensive American coal at a price of 20 dollars per ton.

The United States gained de facto control over the European financial system. 20% of the amount of aid European states had to repay with the help of exports to the United States of raw materials necessary for the needs of American industry. Thus, the USA increasingly enslaved European countries, providing themselves with cheap raw materials and strengthening control over the European economy.

Naturally, having received economic levers of influence on European countries, the United States could also push its political interests. First and foremost, Washington demanded that Western European countries receiving US economic assistance remove communists from governments and tighten policy towards communist parties. In fact, many European countries turned into semi-colonies of the United States, but their leadership took this step consciously, fearing the loss of their own power and its transfer into the hands of the communist and socialist parties. After all, the economic crisis, social tensions, the growth of the authority and influence of the communists threatened the positions of right-wing and center-right parties in Europe, major industrialists and landowners. 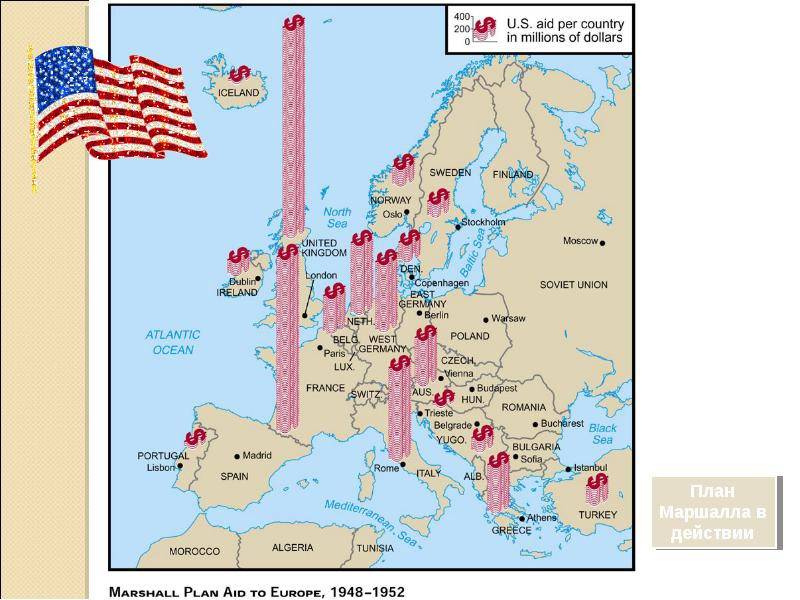 17 of the capitalist countries were forced to agree with the Marshall Plan, which received a total of about 20 billion dollars in aid from the United States. In fact, Washington transferred a smaller amount to Europe - from 13 to 17 billion, while the United Kingdom received 2,8 billion, France received 2,5 billion dollars, Italy and West Germany received 1,3 billion, and the Netherlands received 1 billion. Other beneficiaries included Austria, Belgium, Greece, Denmark, Ireland, Iceland, Luxembourg, Norway, Portugal, the Free Territory of Trieste, Turkey, Sweden and Switzerland.

The implementation of the Marshall Plan had no clear implications. On the one hand, the European states ravaged by the war, without American assistance, really could not have restored their economies so quickly. American assistance helped to improve the socio-economic situation in Western Europe, reducing social tensions.

One of the important consequences of this assistance was the restoration in Europe of the positions of the petty bourgeoisie - the middle class. In the USA, it was understood that it was the middle class that was the main opponent of the socialist revolutions in European countries, and therefore provided the conditions for its revival. Especially significant consequences of US economic assistance led West Germany, which was able to quickly recover from the war and destruction, and restore both industry and relatively high levels of consumption, once again becoming an economically developed country.

Economic assistance according to the Marshall Plan was also of ideological significance. If Europe remained dilapidated, slowly restoring its infrastructure on its own, this situation would demonstrate the collapse of the capitalist model and show the Soviet Union and socialism in a more favorable light. Washington needed an economically prosperous Europe as a beautiful picture that showed the advantages of a capitalist economy over socialism. Actually, according to the same rules, assistance was subsequently carried out both to South Korea, and Japan, and to Taiwan, which turned into the same “showcases of capitalism”, only in the Asia-Pacific region.

Thanks to the Marshall Plan, European countries actually became enslaved to the United States, and not only economically but also politically. Until now, Western Europe is loosening the consequences of the Marshall Plan, which consists in the actual loss of political sovereignty. European countries were doomed to follow in the wake of American foreign policy, adhering to the course chosen by Washington, even when it was completely unprofitable for the European states themselves (this concerns, first of all, France or Italy, for whom the geopolitical confrontation with the Soviet Union and the socialist camp meaningless). 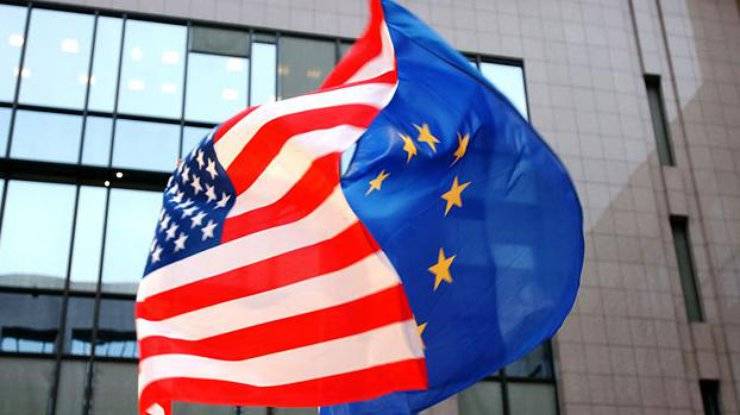 So the Marshall Plan was a brilliant American move. First, Washington, through economic assistance, put European countries in a state of economic dependence on American policy, and then began to determine the political course of Western Europe. In order to further subordinate European countries to American interests, almost simultaneously with the Marshall Plan, the creation of NATO began - the North Atlantic Alliance, which included most of the countries that received economic aid from the United States. If the Marshall Plan was the economic expression of the beginning of the Cold War, the creation of the NATO bloc was a military-political act that symbolized the beginning of a new era.

The Marshall Plan was designed for four years, but it was turned not in the 1952 year, but in the 1951 year. The reason for this was the Korean War, for which the United States required a lot of money. But Washington managed to achieve its main goals in the three years from 1948 to 1951, while the United States was implementing its cunning strategy of economic assistance. Western Europe was under the political and economic control of Washington, after which the United States focused on East and Southeast Asia, of course, not forgetting to control the political processes in European countries.

Ctrl Enter
Noticed oshЫbku Highlight text and press. Ctrl + Enter
We are
Results of the week. "Well, do not change me because of every idiot!"Yuri Drozdov: Russia prepared the role of the sacrificial calf
Military Reviewin Yandex News
Military Reviewin Google News
37 comments
Information
Dear reader, to leave comments on the publication, you must sign in.