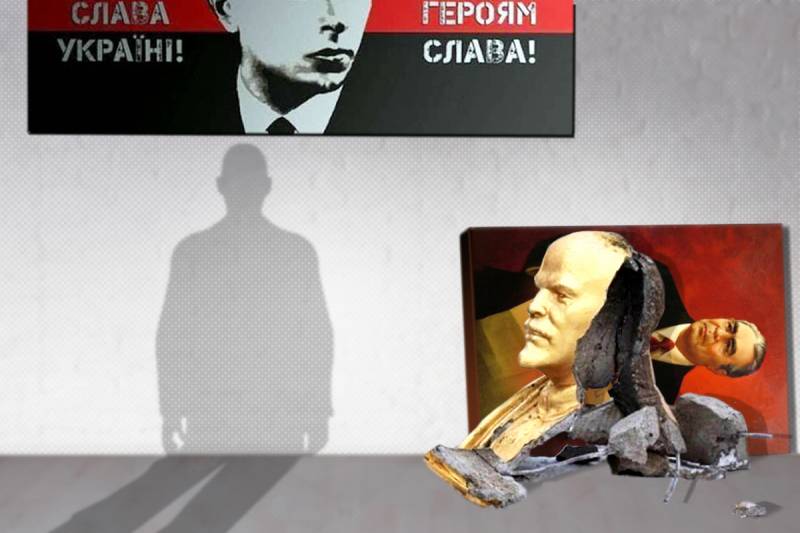 We talk a lot and discuss Ukraine with our readers. We weigh the number of normal people quantitatively and qualitatively left there and think about the origins of idiocy that suddenly hit a certain part of the population.

Sorry, of course not.

Today we will take you on a tour. In a very original museum, created by famous people. Thanks to the burnt nerves, colleagues around Okrugora can show and discuss. 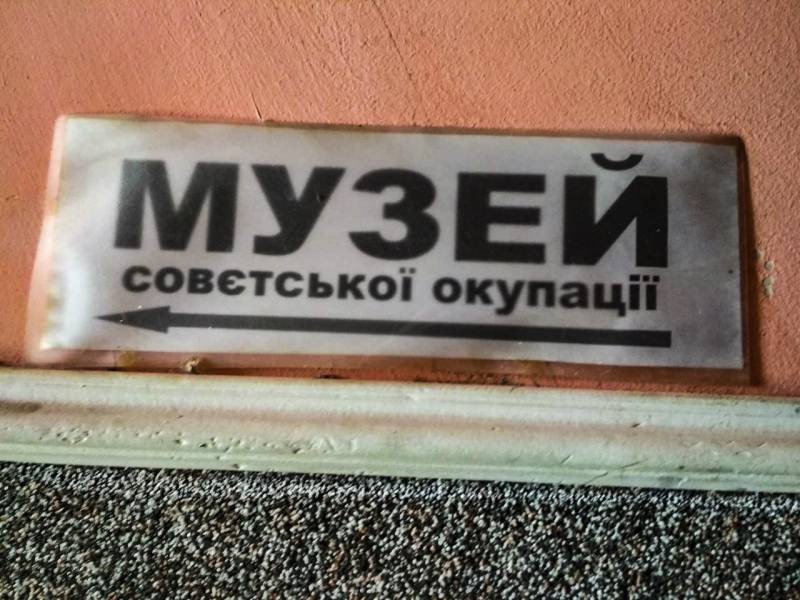 The same museum simply had to be in Moscow, if Russia had not sharply sober from Westernism and liberalism. The museum, which will be discussed, is small and was born not in the offices of power, but in the midst of a liberal rights advocacy community.

Museum of the Soviet occupation of Ukraine.

The most interesting thing here is the creators. All of us are painfully well-known society, whose roots are not in the West, or even in Ukraine.

Well, we are sure that everyone already understood that we are talking about the Memorial Society.

Kiev Memorial Society acted on the same tracing as the Moscow one. Search for documents about the Bolshevik terror. Publication of lists of "illegally repressed." Search for mass graves. In this case, the facts were often thought out, and the number of those killed was deliberately overstated.

The museum was born when a traveling exhibition was organized in Memorial entitled “Not Forgetful: The Chronicle of the Communist Inquisition”. And this circus successfully rode through the cities and rallies.

And since 30 November 2001, the exhibition is located in the premises of the Kiev city organization of the Ukrainian society "Memorial" to them. Vasil Stus.

From that, the first exhibition in the museum stands are preserved. Today they are ready to go "outside". And the exhibits are mainly various documents, newspapers, flyers, photos. 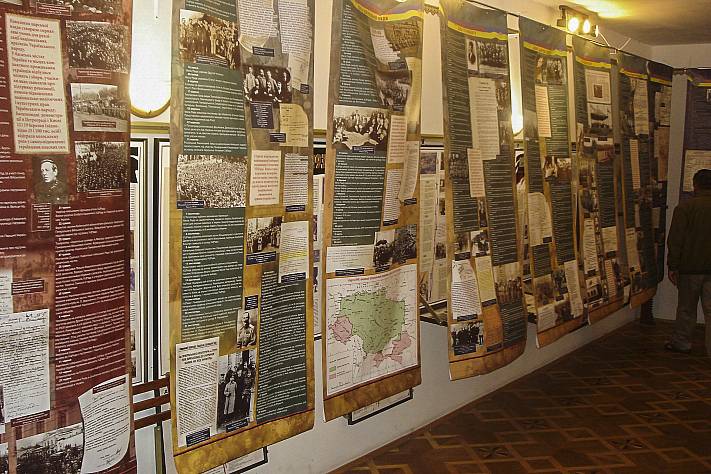 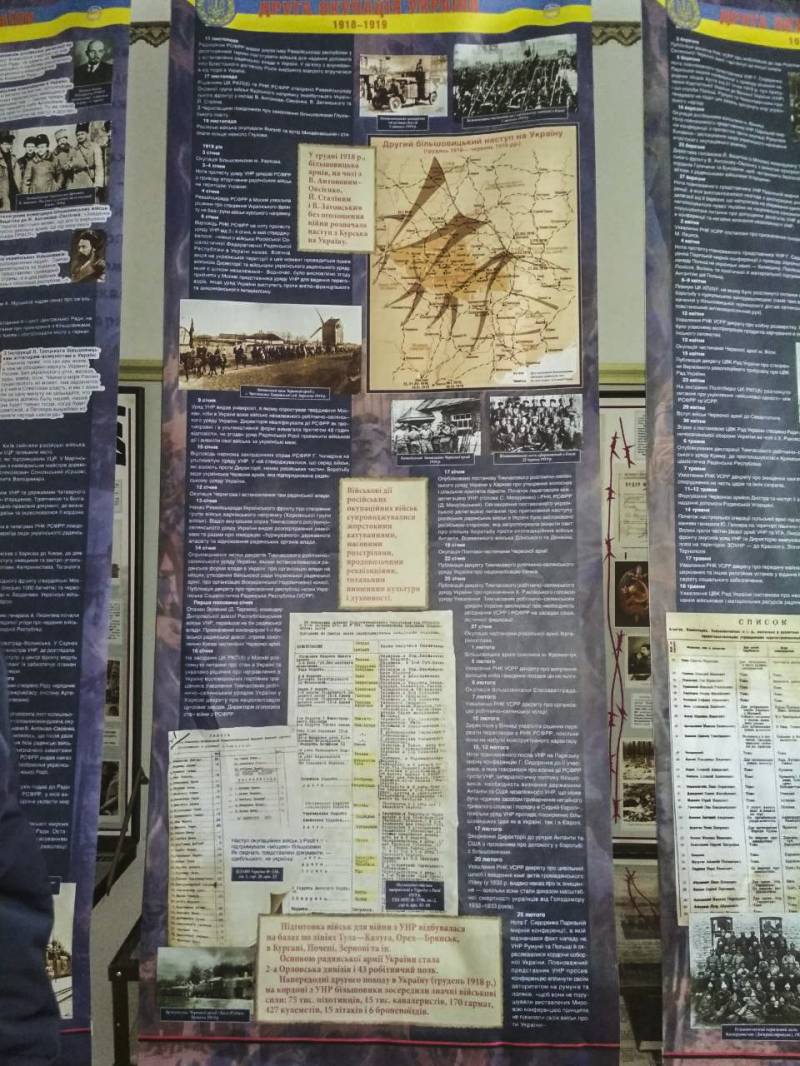 The museum has become an exhibition thanks to President Viktor Yushchenko. It was on his personal initiative that the Kiev city organization "Memorial" conference renamed the exhibition "The Museum of Soviet Occupation" 26 in May 2007.

Modern ideologists of the Square call this museum a symbol of modern Ukraine. All Soviet история regarded as a time of aggression and terror. And the idea of ​​creating a museum, the Ukrainian "Memorial" borrowed from the Baltic, Georgian and Czech counterparts. They also have museums of the Soviet occupation.

Today, the museum exposition is actively used to raise hatred for Russia and Russians. Open lessons for schoolchildren, excursions, lectures are held in the halls of the museum. Russia in general and the Russian army in particular are considered only as criminals and occupiers.

Materials in the main exhibition of the museum are served by periods:

In addition, the museum has an assembly hall in which you can watch a fairly large (for 80 pieces) collection of full-length and short-length videos. 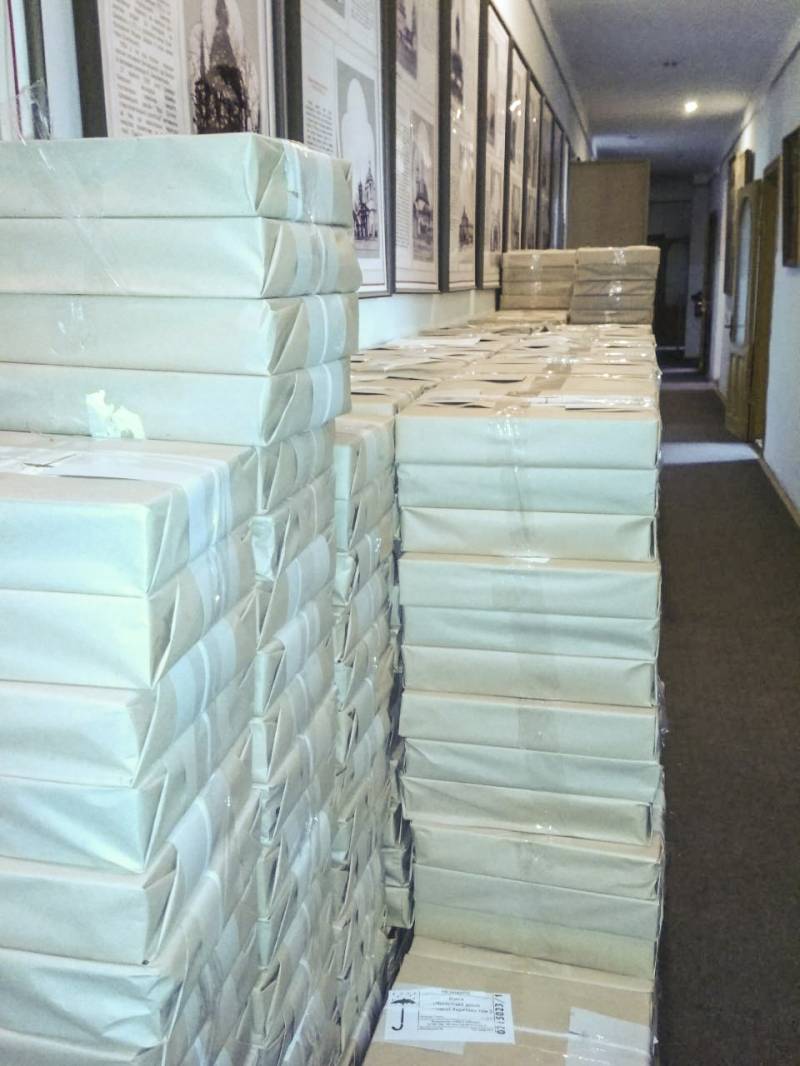 And, of course, you can purchase didactic materials from Memorial. Here they are, waiting for their readers.

What to say about the exposure? And everything is natural. 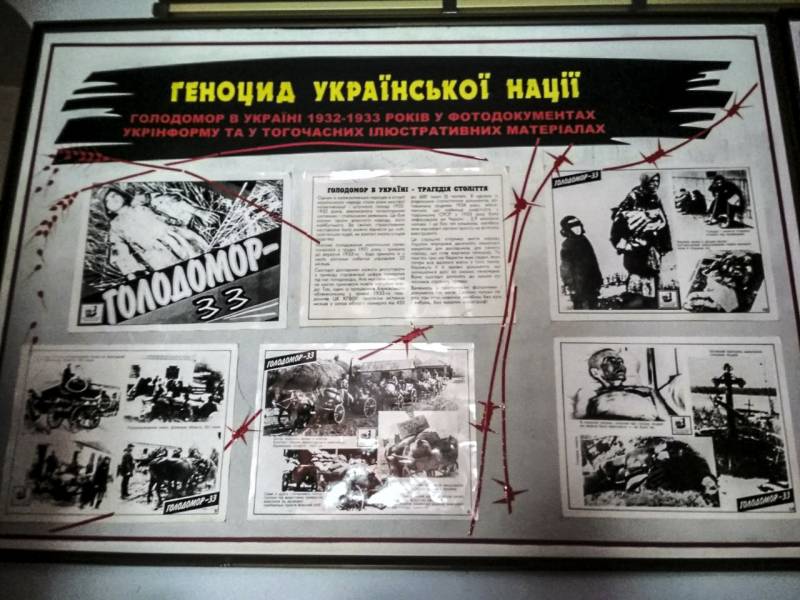 Symbolic red barbed wire. A red thread goes through everything. 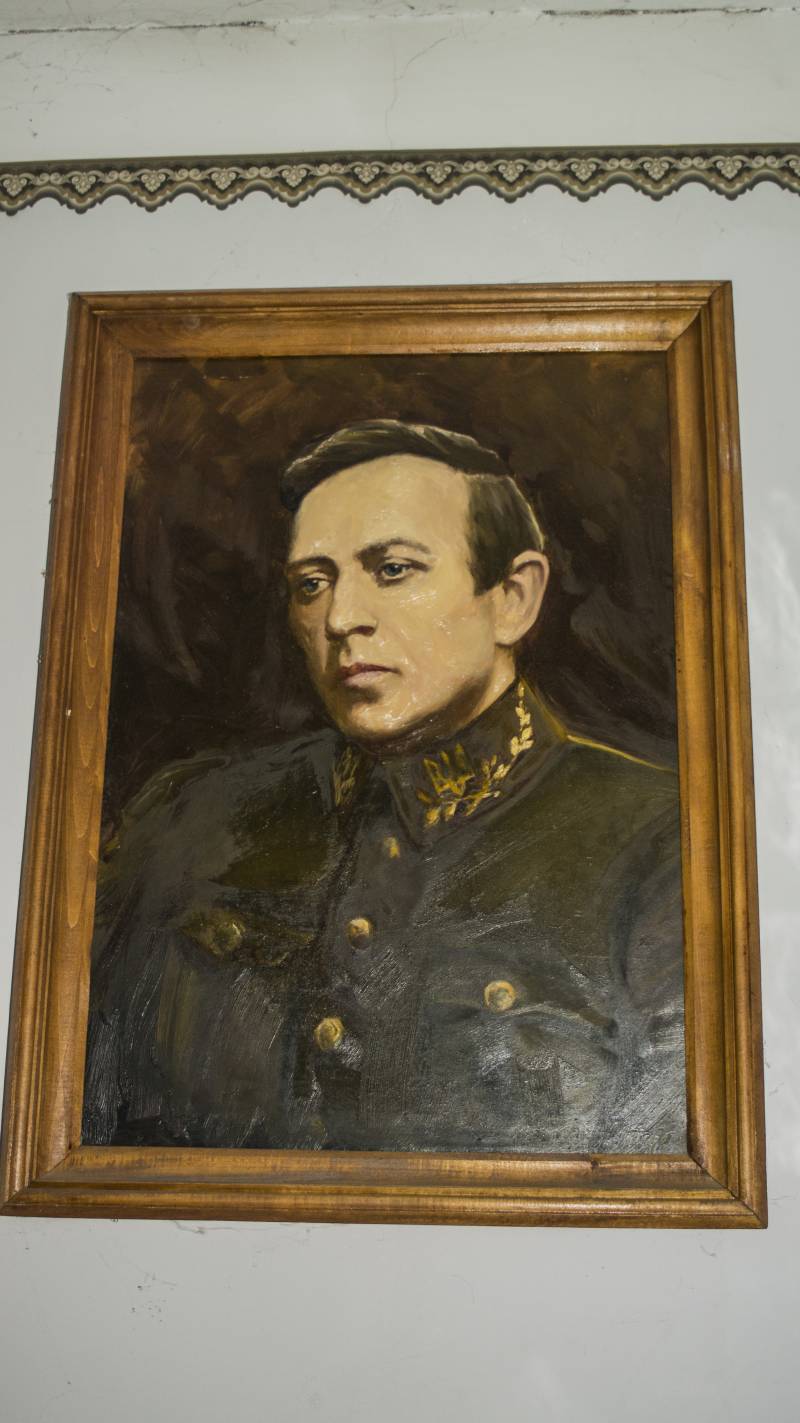 Not bad painted portraits of heroes. In their opinion. 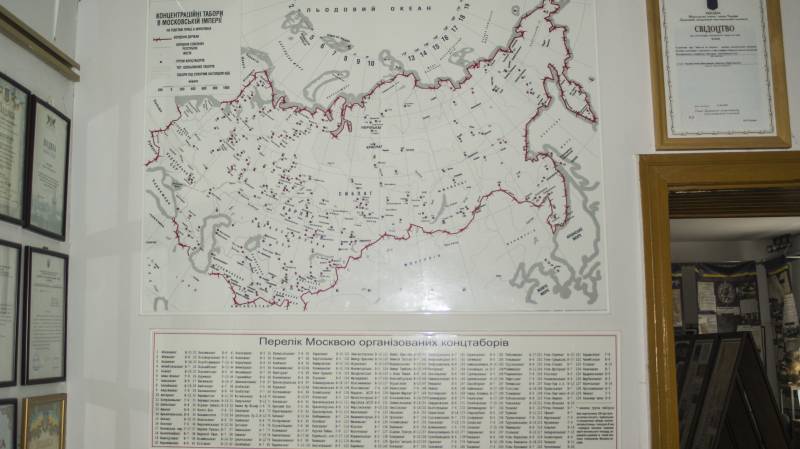 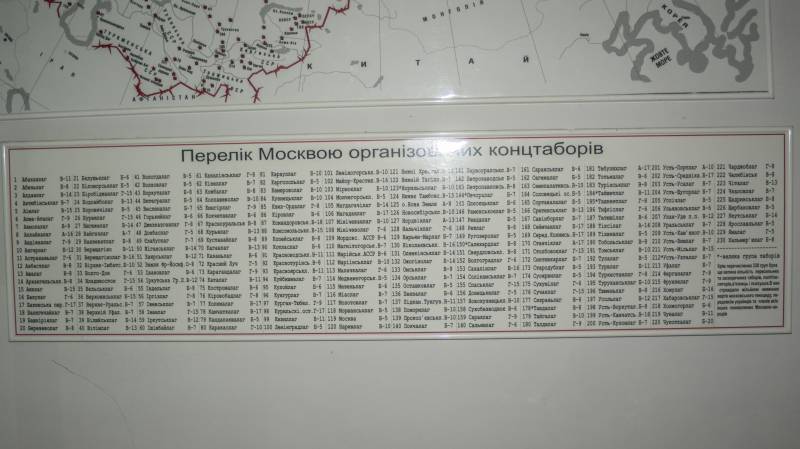 Schemes showing, of course, all the camps where the Ukrainians were sitting. 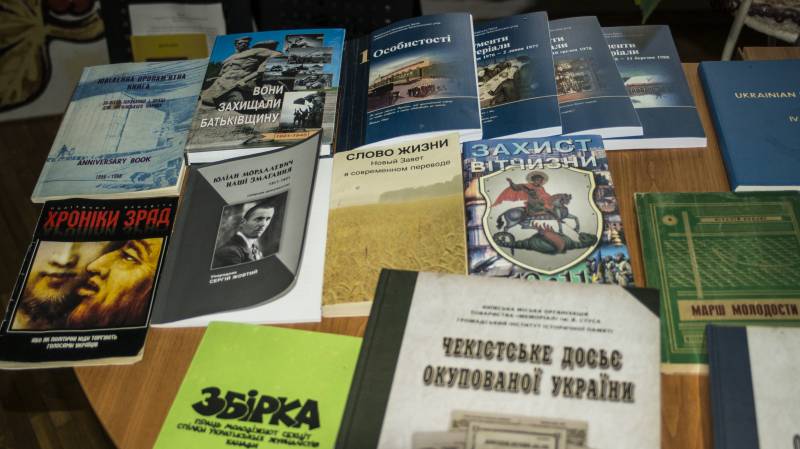 There is a book there, “They defended their homeland,” we even doubted, whether inside. We made sure, thanks to modern means of communication - for now. About the soldiers of the Red Army, who fought against fascism. Probably by mistake got the book. But the "Chronicles of Zrad" - this is about modern Ukraine. 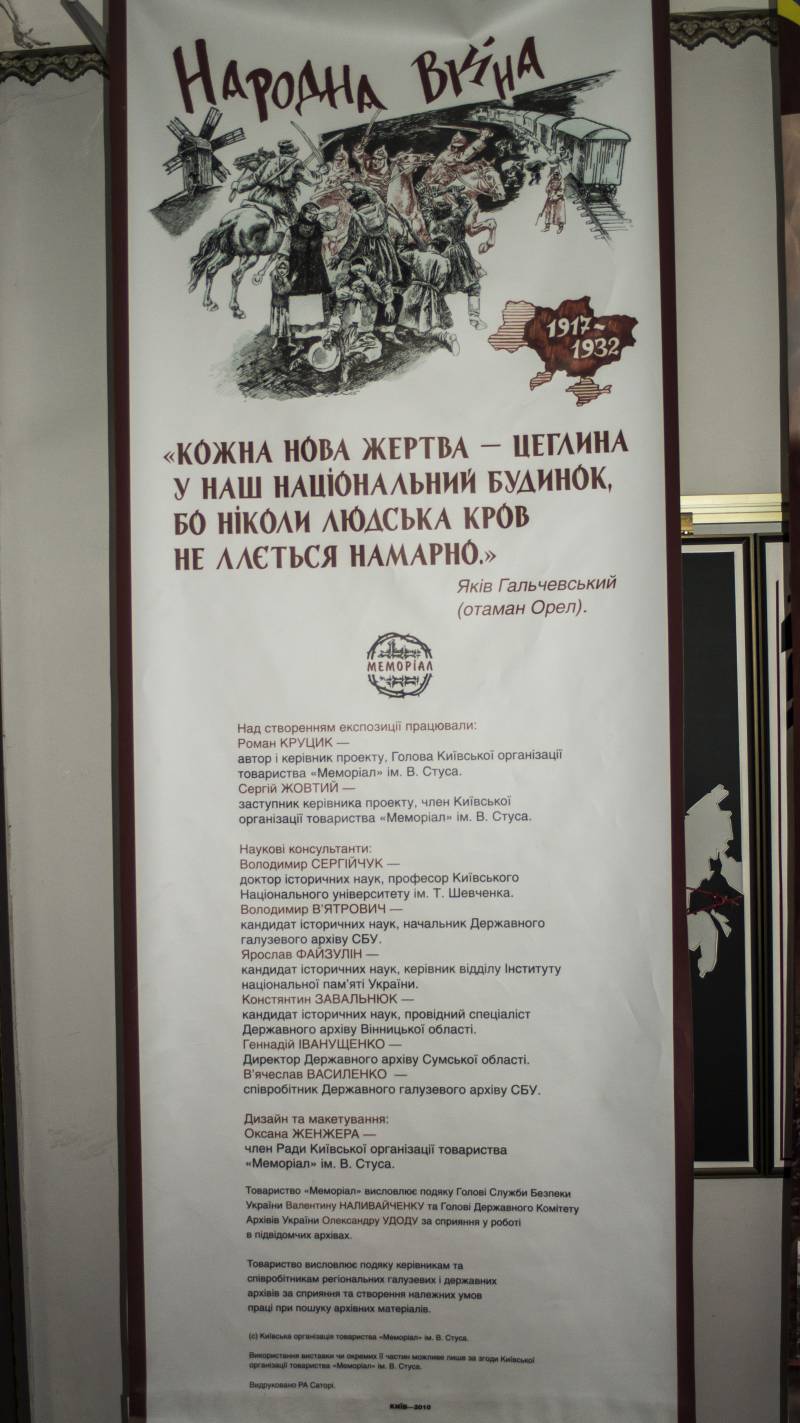 Very curious exhibit. As a society, "Memorial" deacon (thanks) to the head of the SBU Nalyvaychenko. 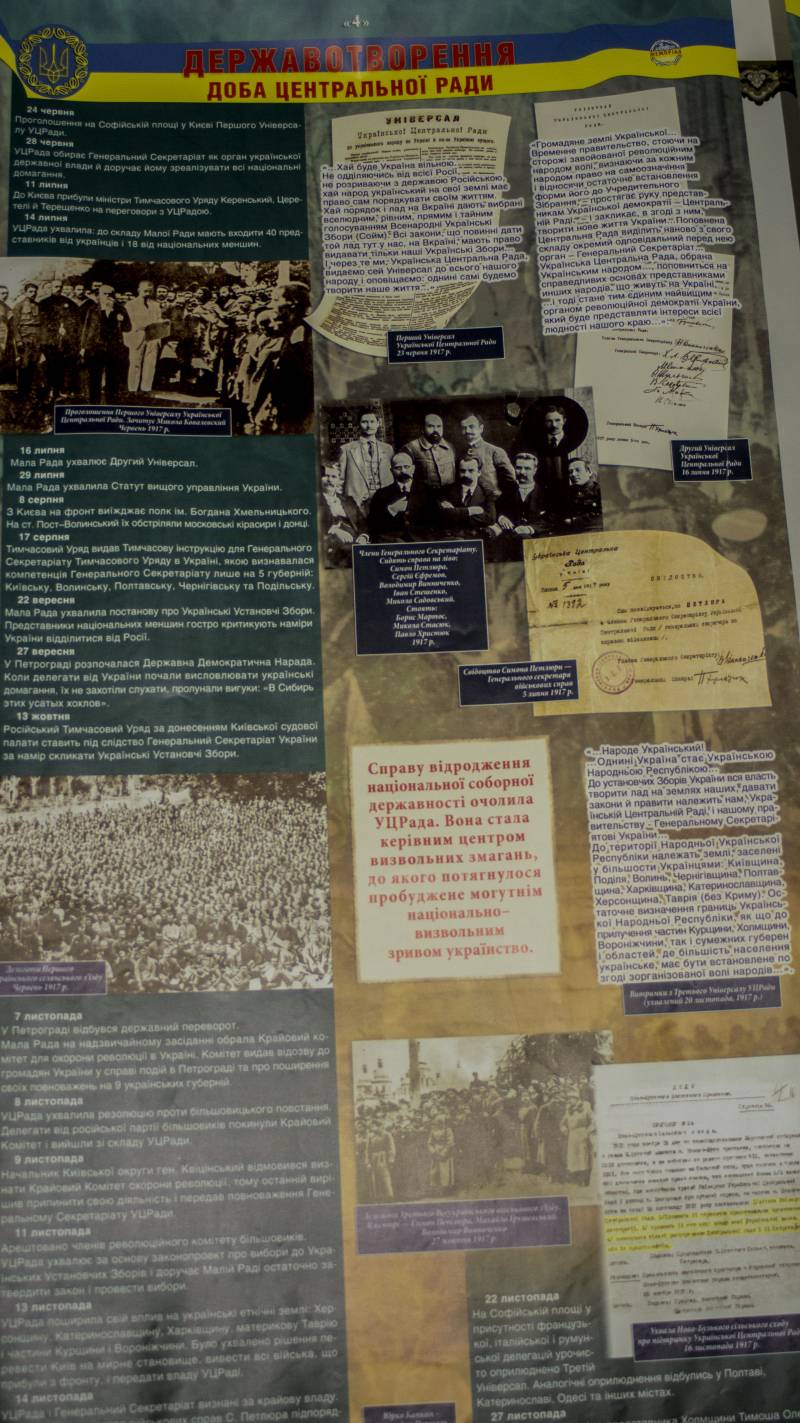 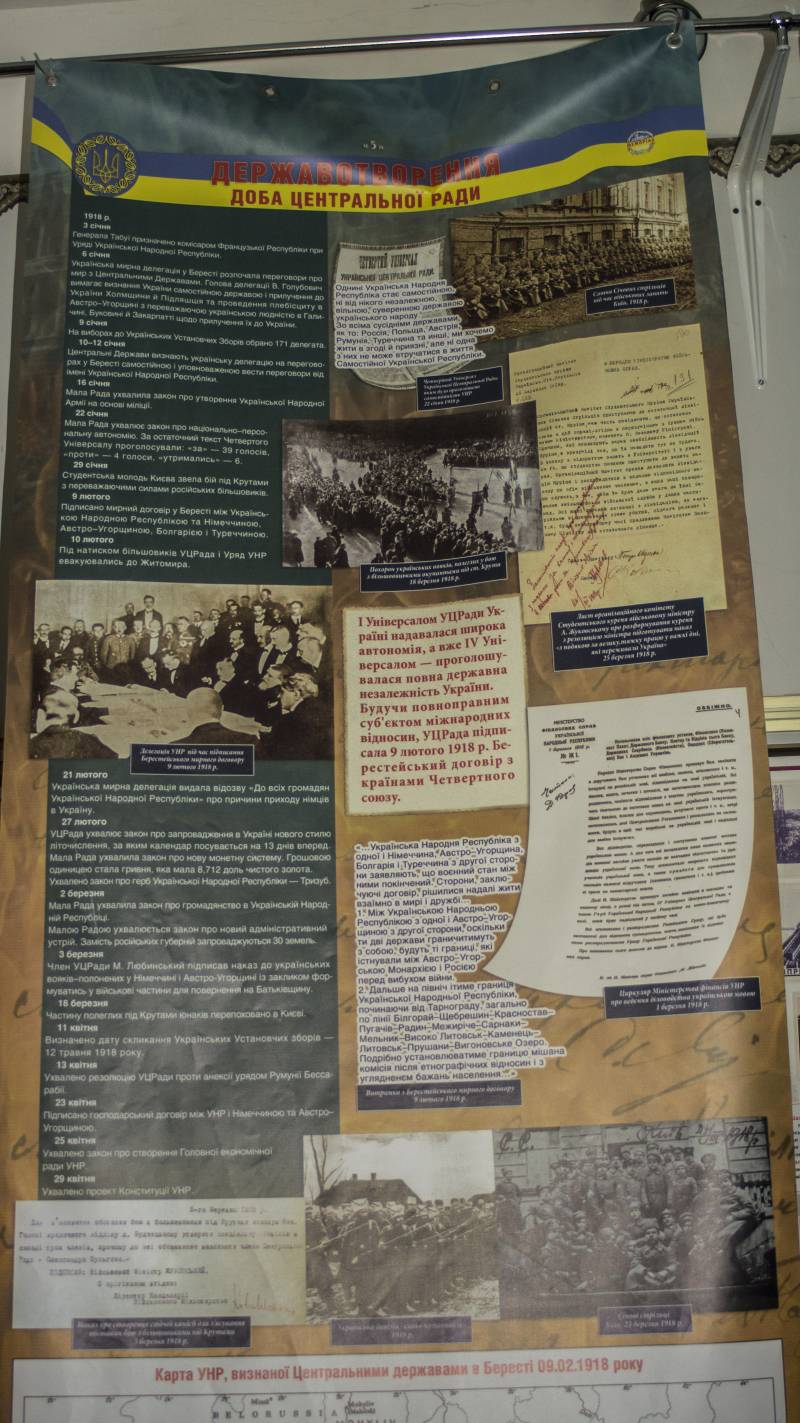 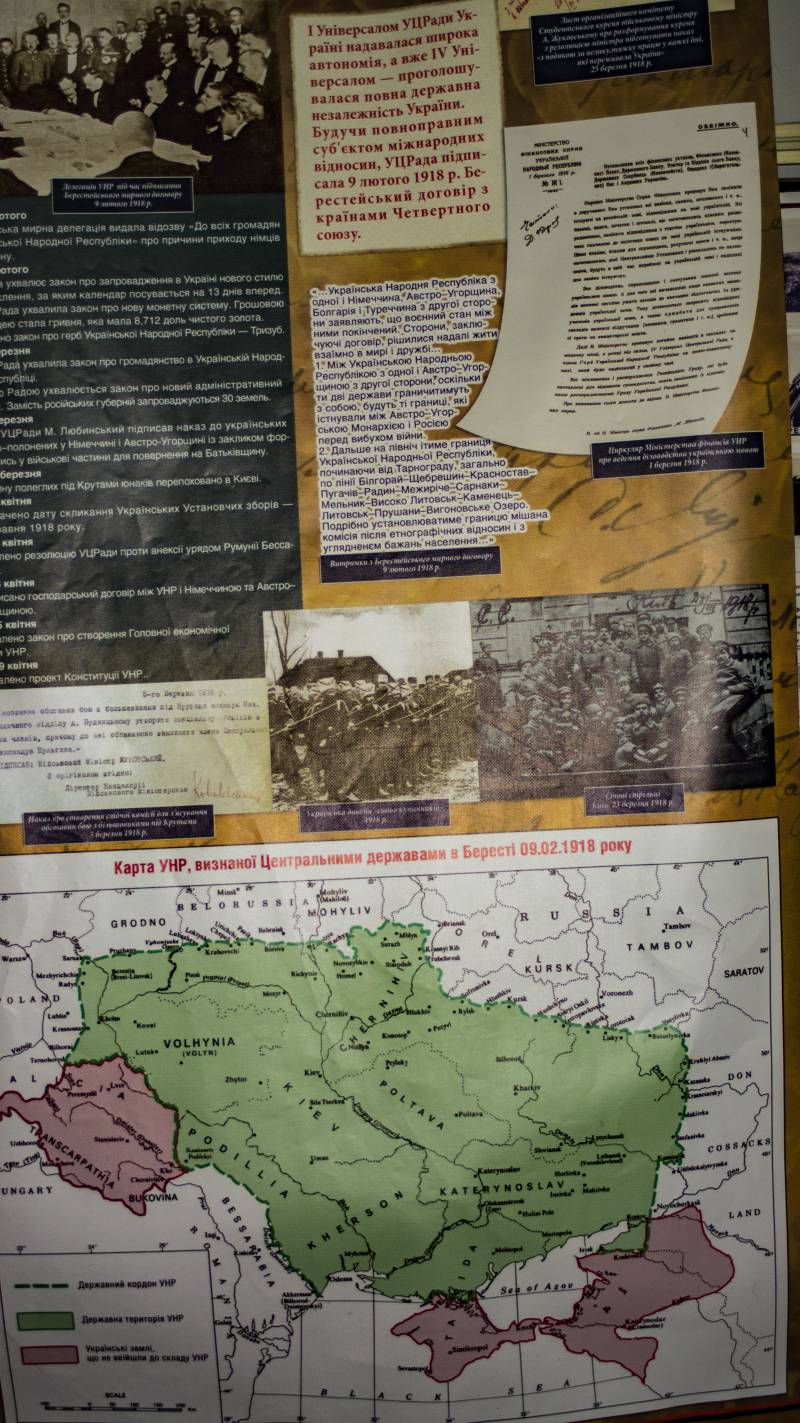 Here the most interesting is the "map of the UNR (the Ukrainian People's Republic), recognized by the Central Powers in Brest in February 1918 of the year." With the mildest hint at half of Belgorod, Voronezh regions and Krasnodar Territory. 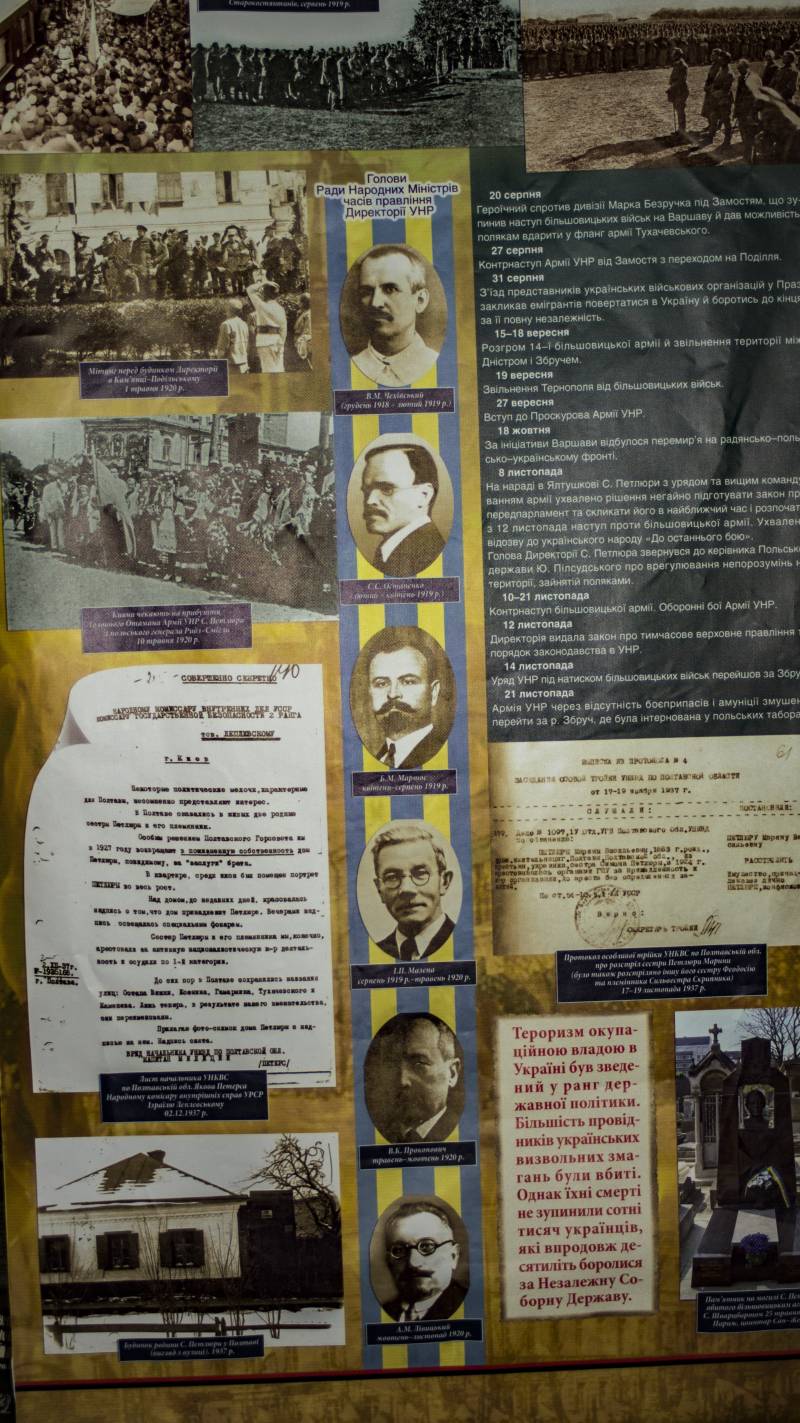 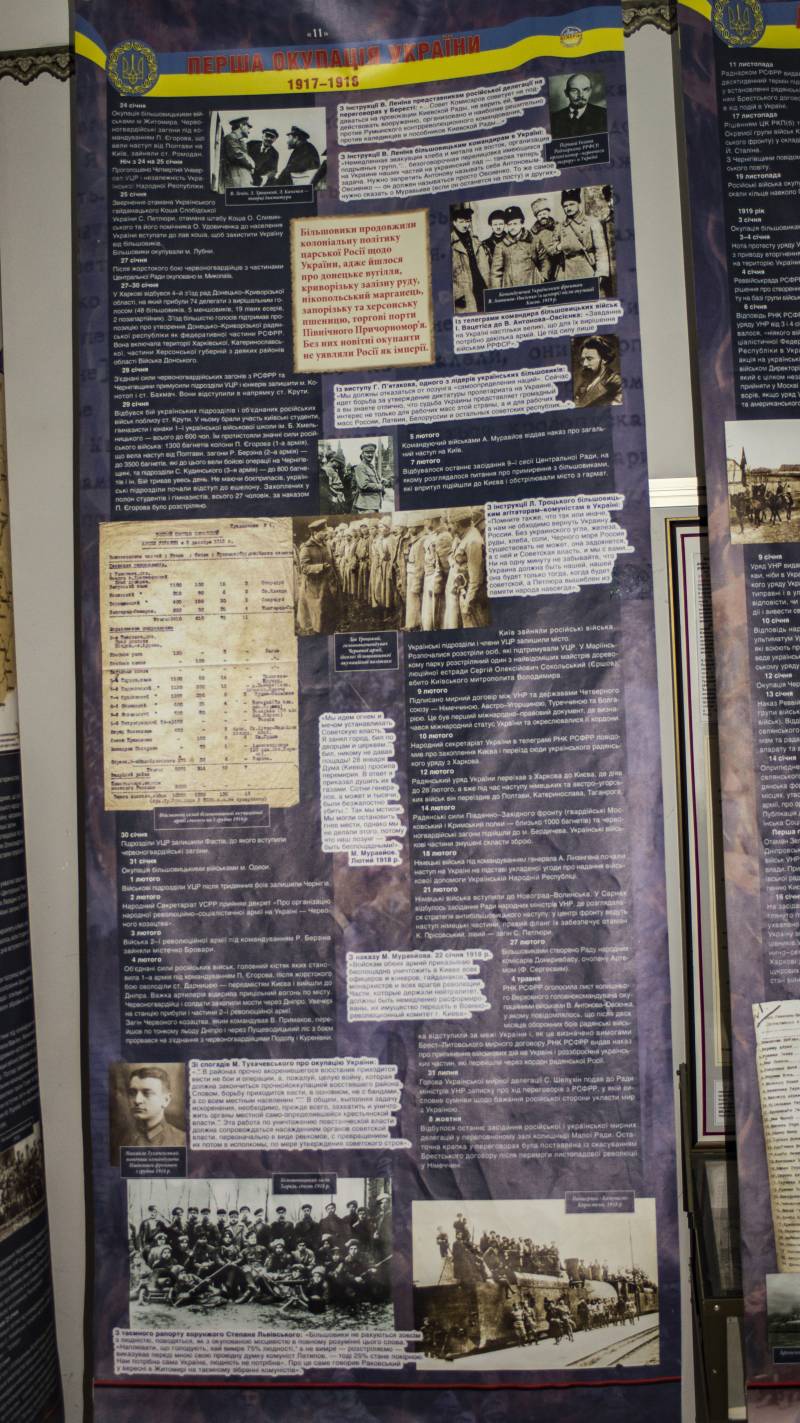 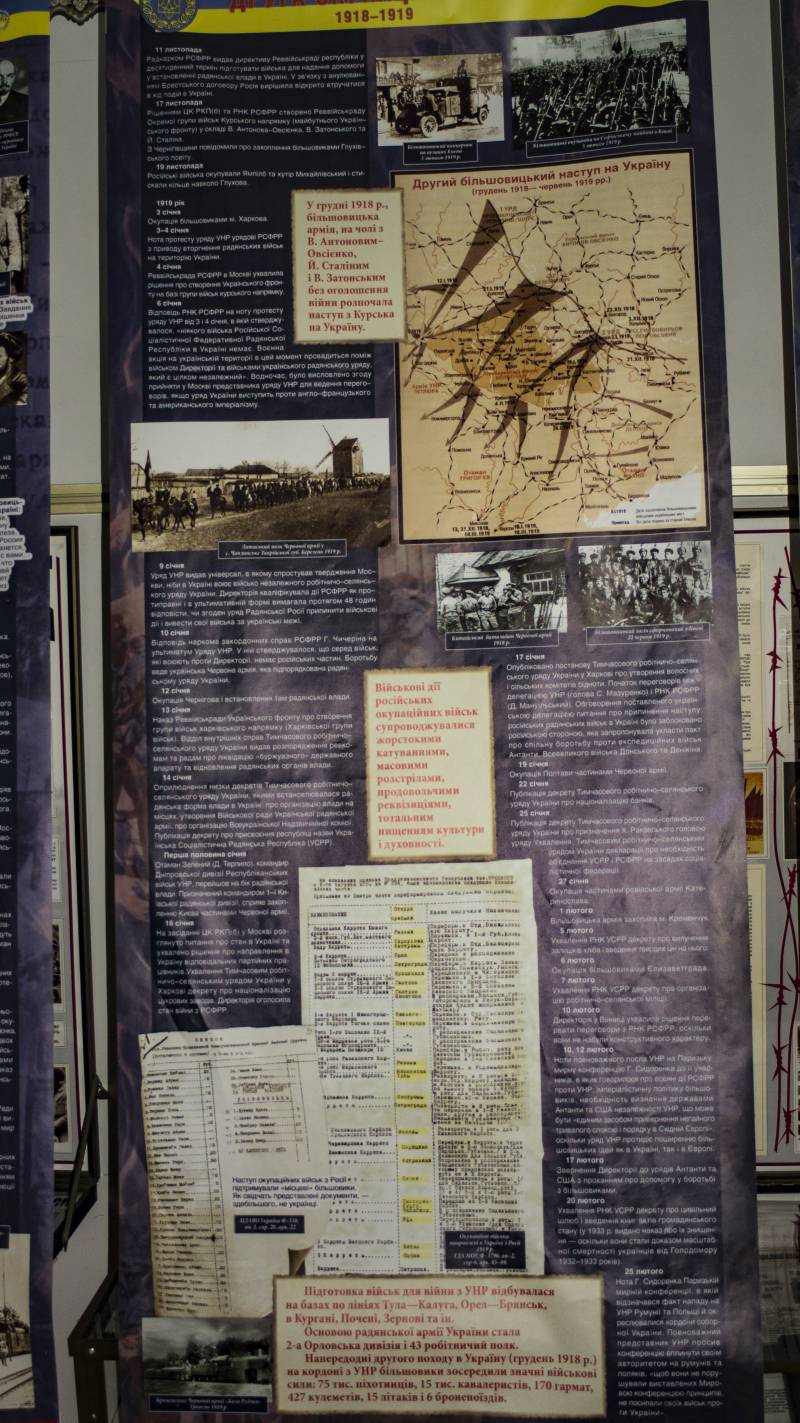 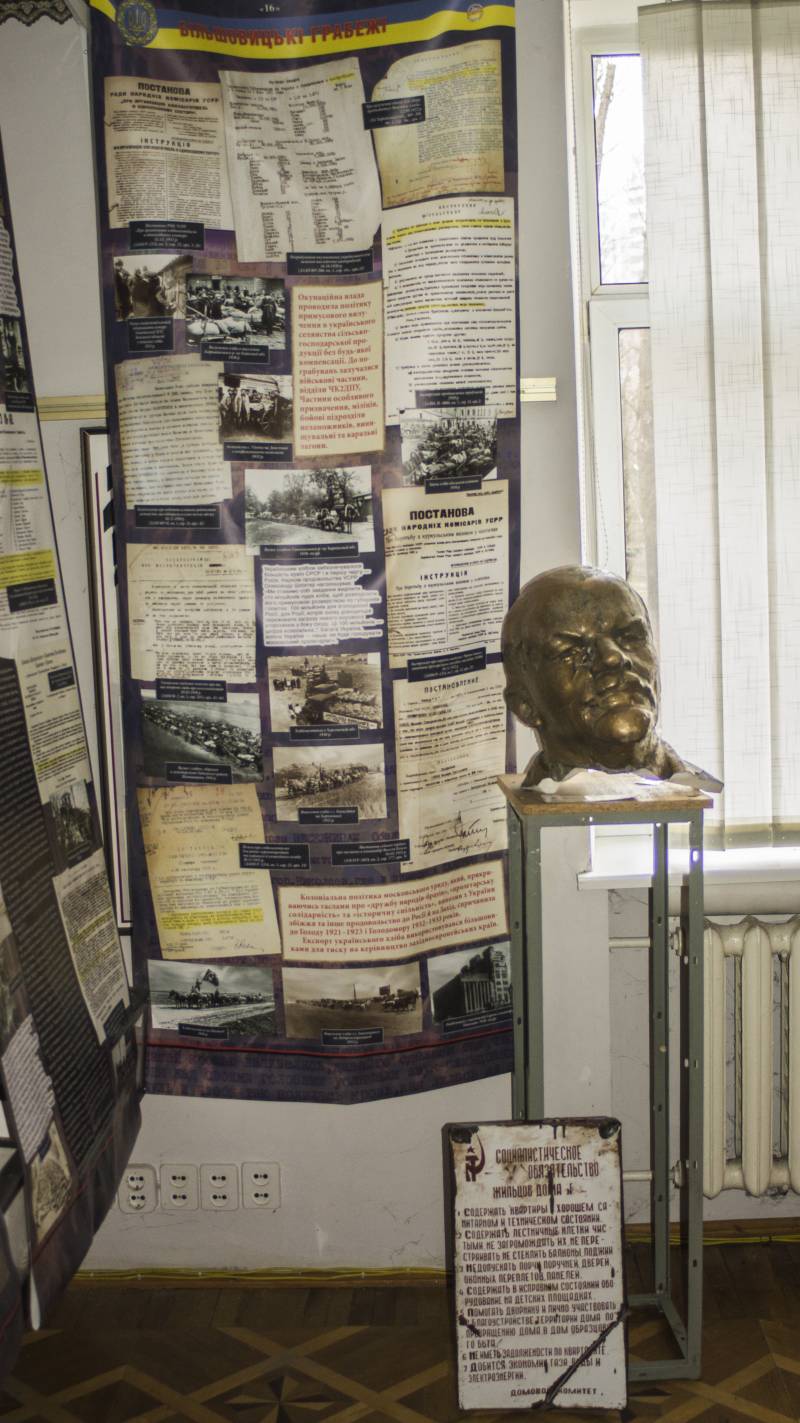 Of course, a fair amount of exhibits are evidence. 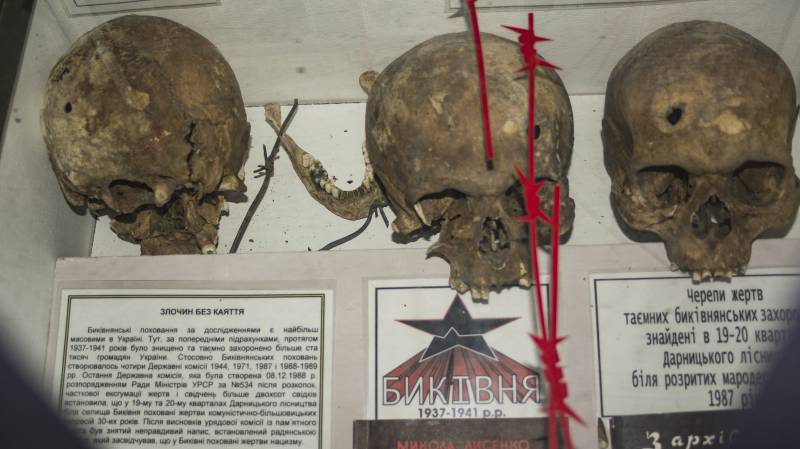 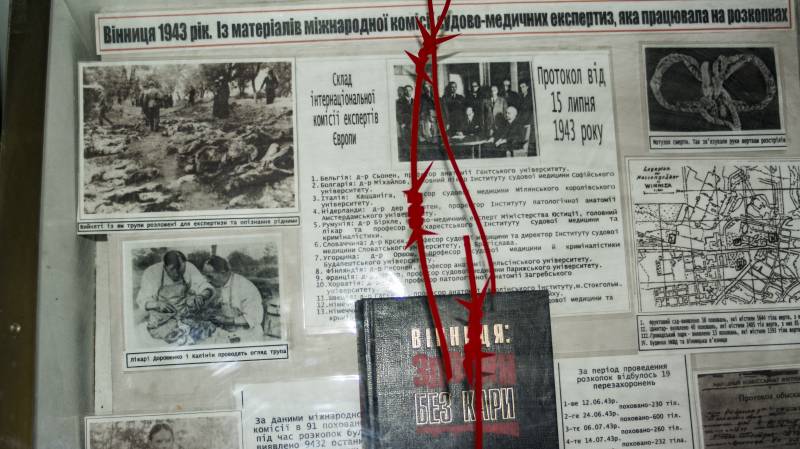 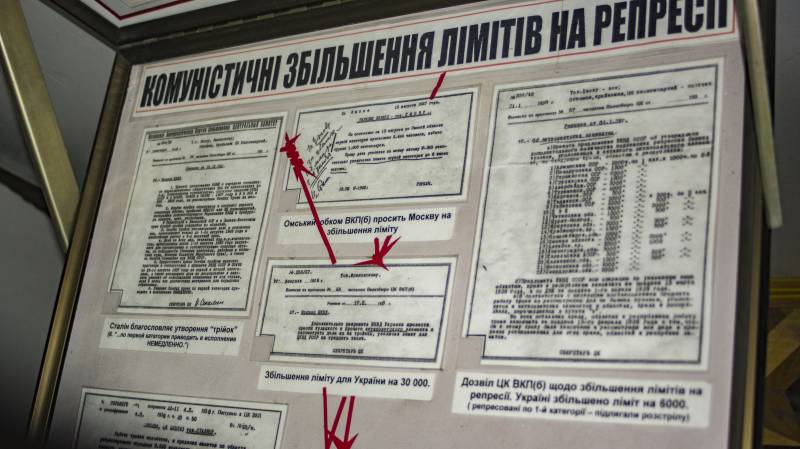 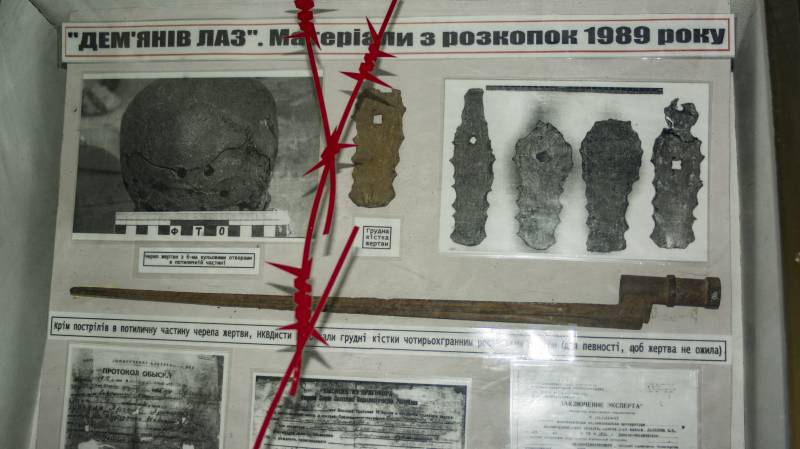 There is no doubt that the skulls are shot by invaders. But with sternum obviously overkill. Sorry, but a headshot is a headshot. And after him stabbing the chest with a bayonet ... Oh, yes, of course, what to take from the bloody barbarians ... 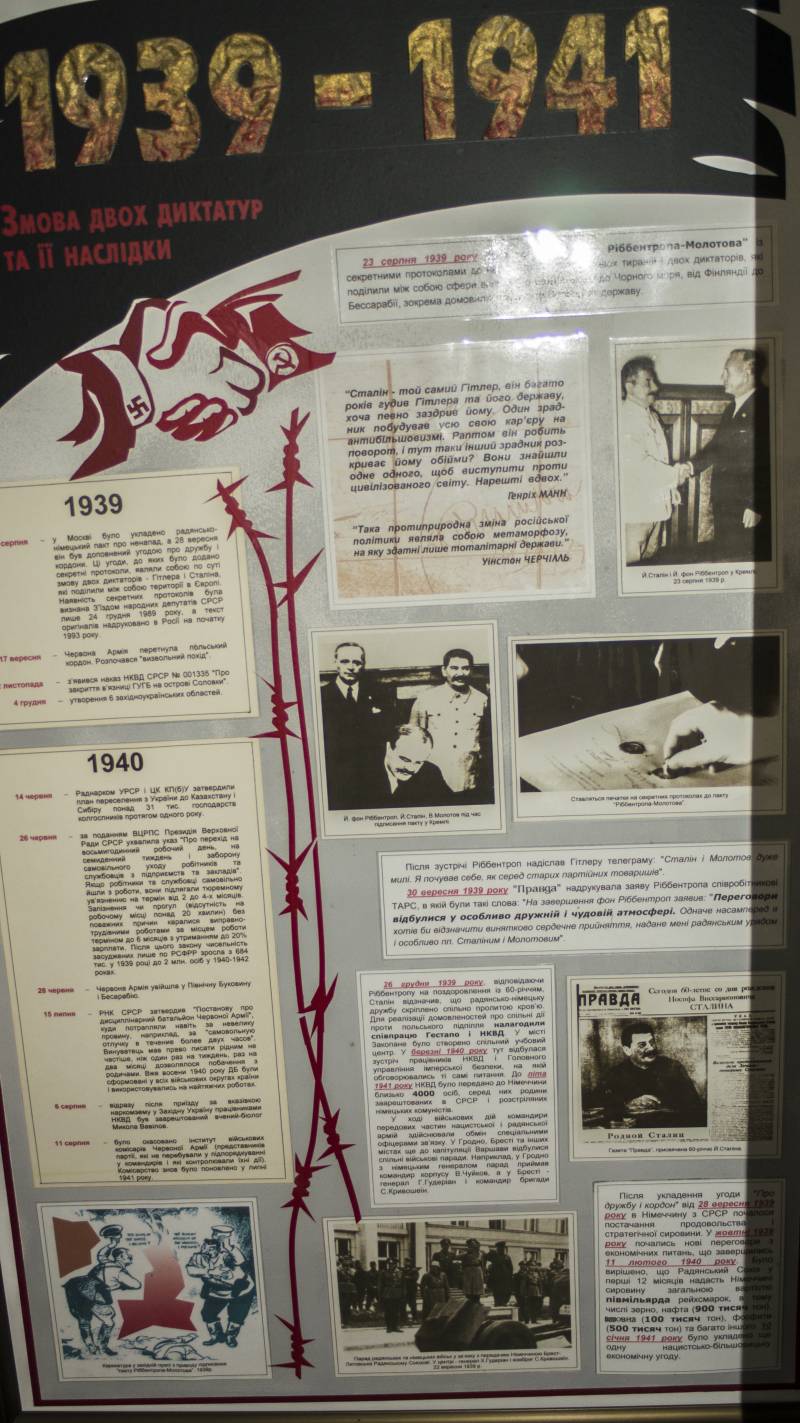 The collusion of Stalin and Hitler and its consequences ... This refers to the Molotov-Ribbentrop Pact, of course. With arguments in the best traditions ...

The most interesting thing about the occupation of Nazi Germany is not a word. Although it would be worth it, after all, almost three years. However - silence. From 1941 to 1944, the Soviet occupation of Ukraine continued for a year ... 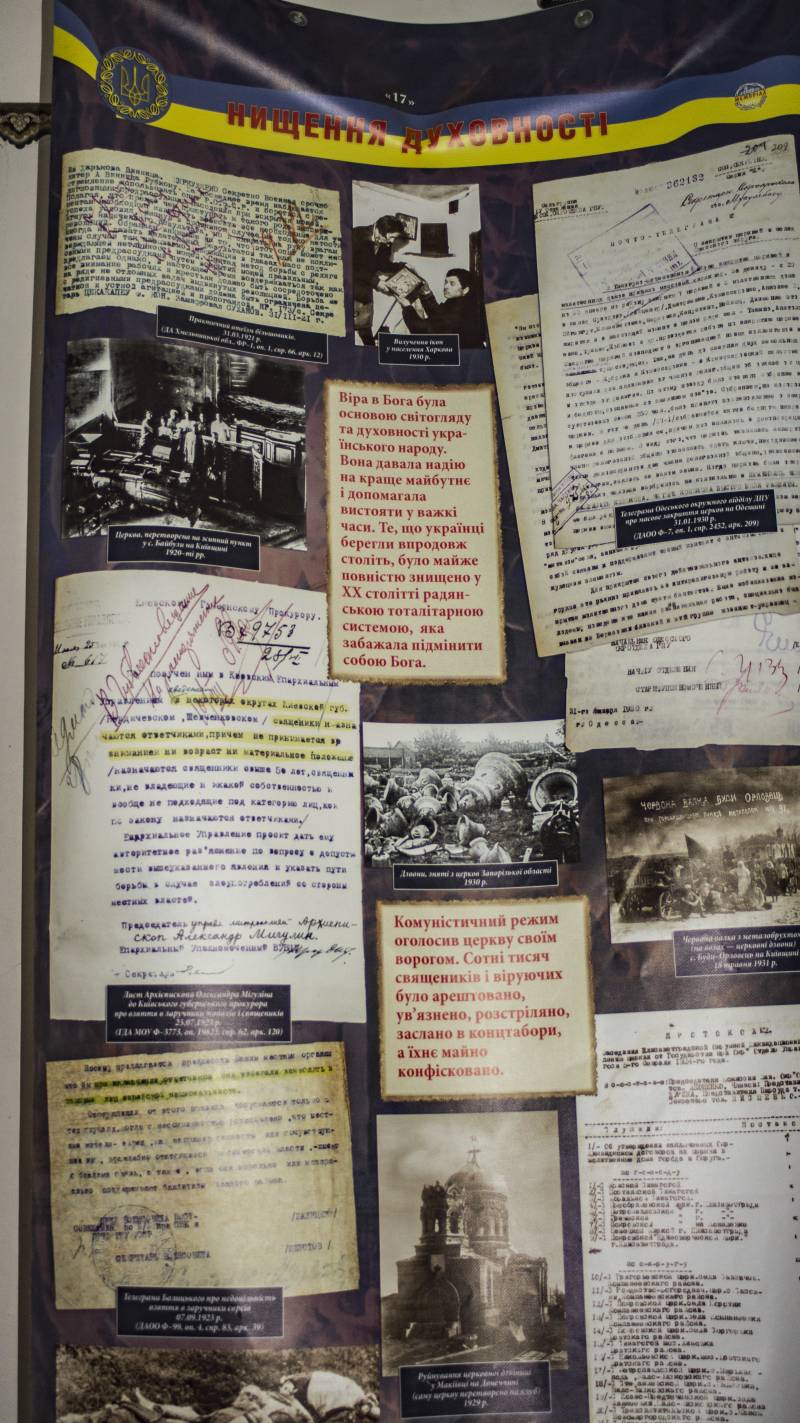 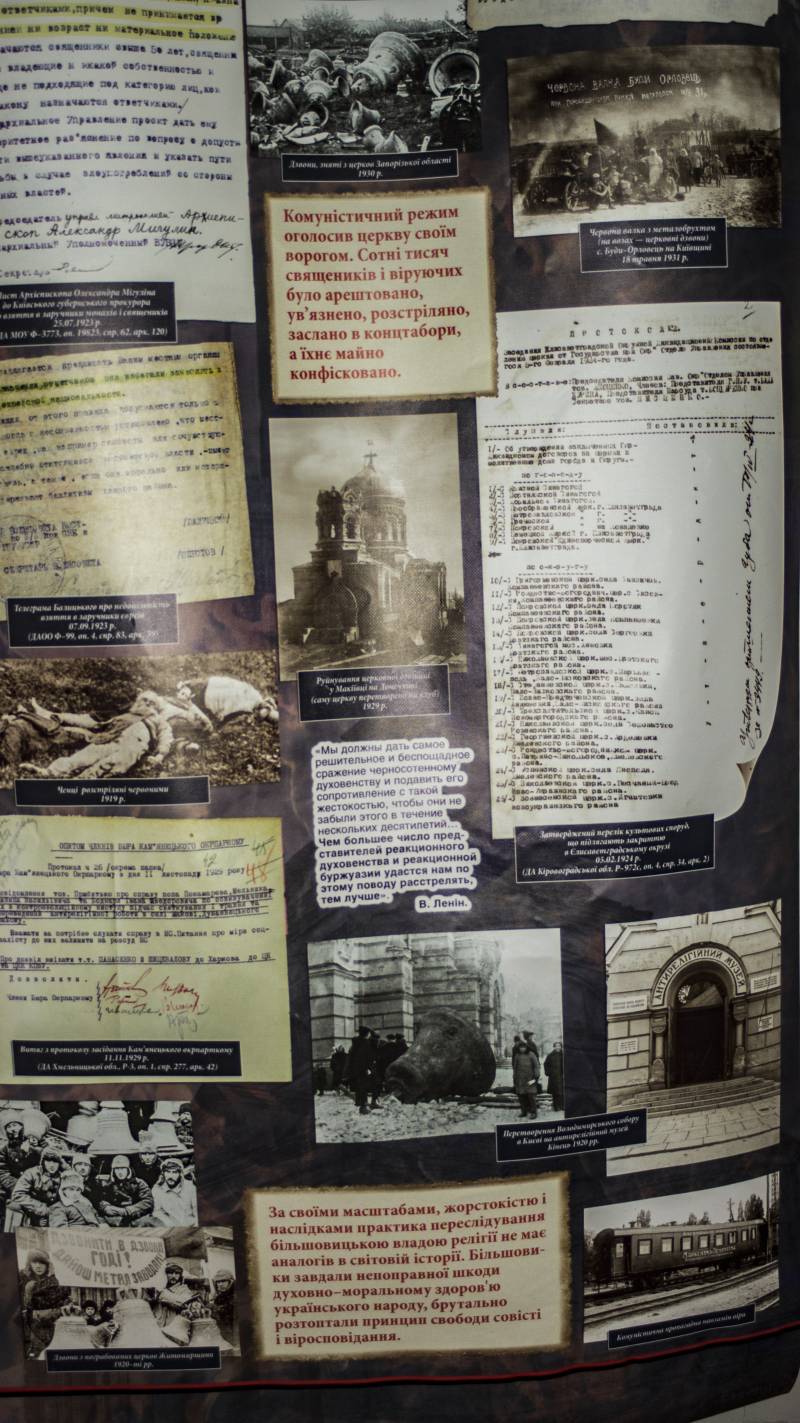 For moans about replacing the true faith in God with a damned communist belief, absolutely nothing is heard about the restored churches, schools, factories ... After all, not all the temples were repaired themselves? 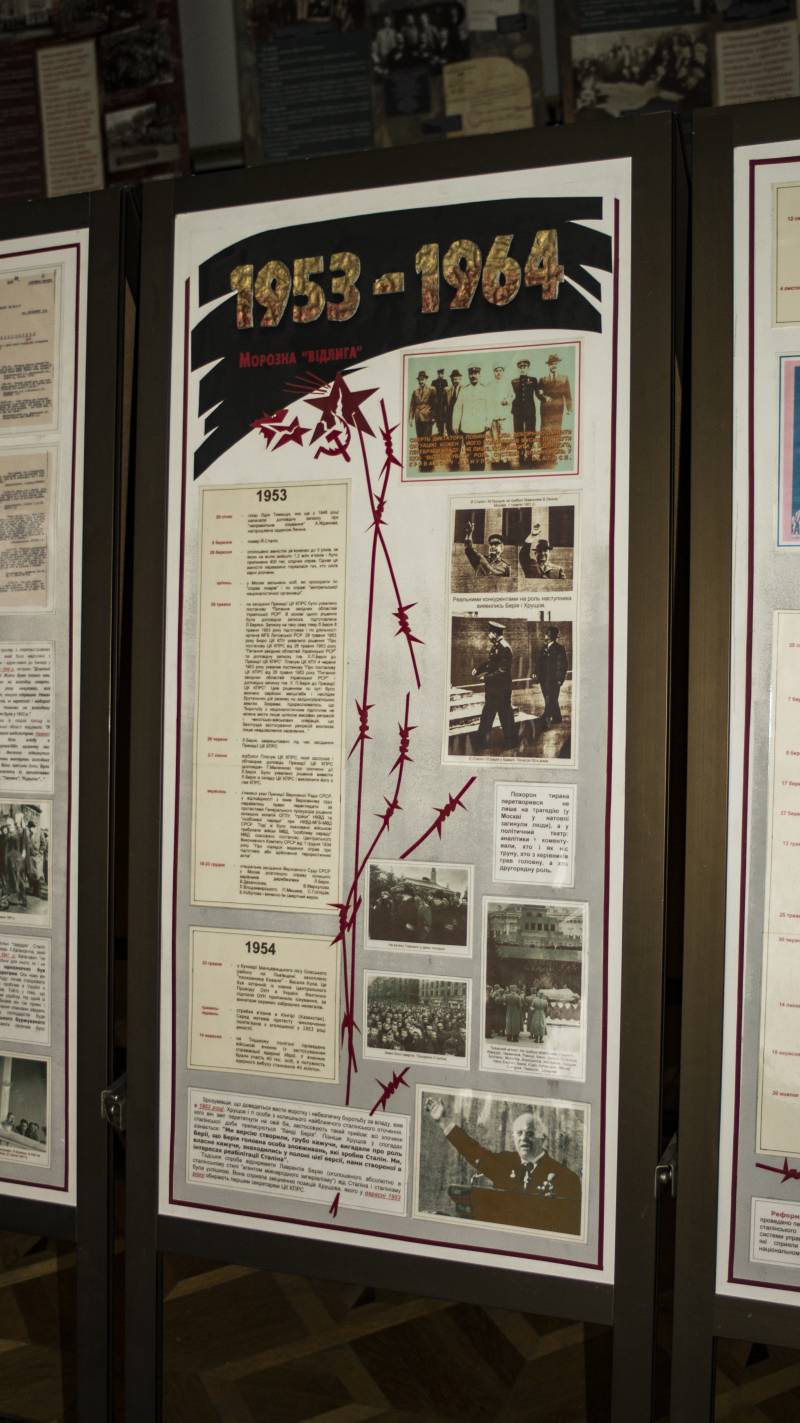 Handsomely? Under the barbed red wire quietly so attracted the Crimea ... 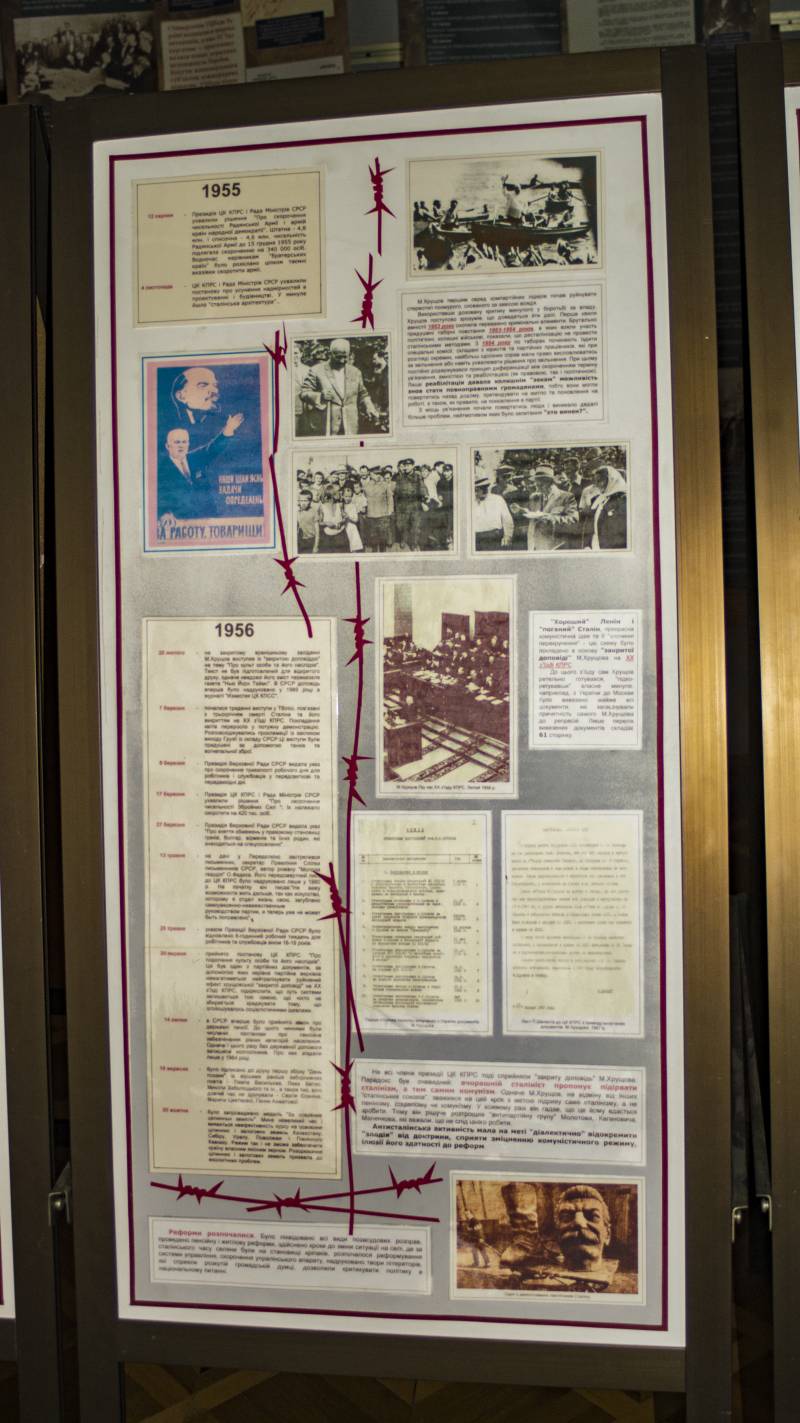 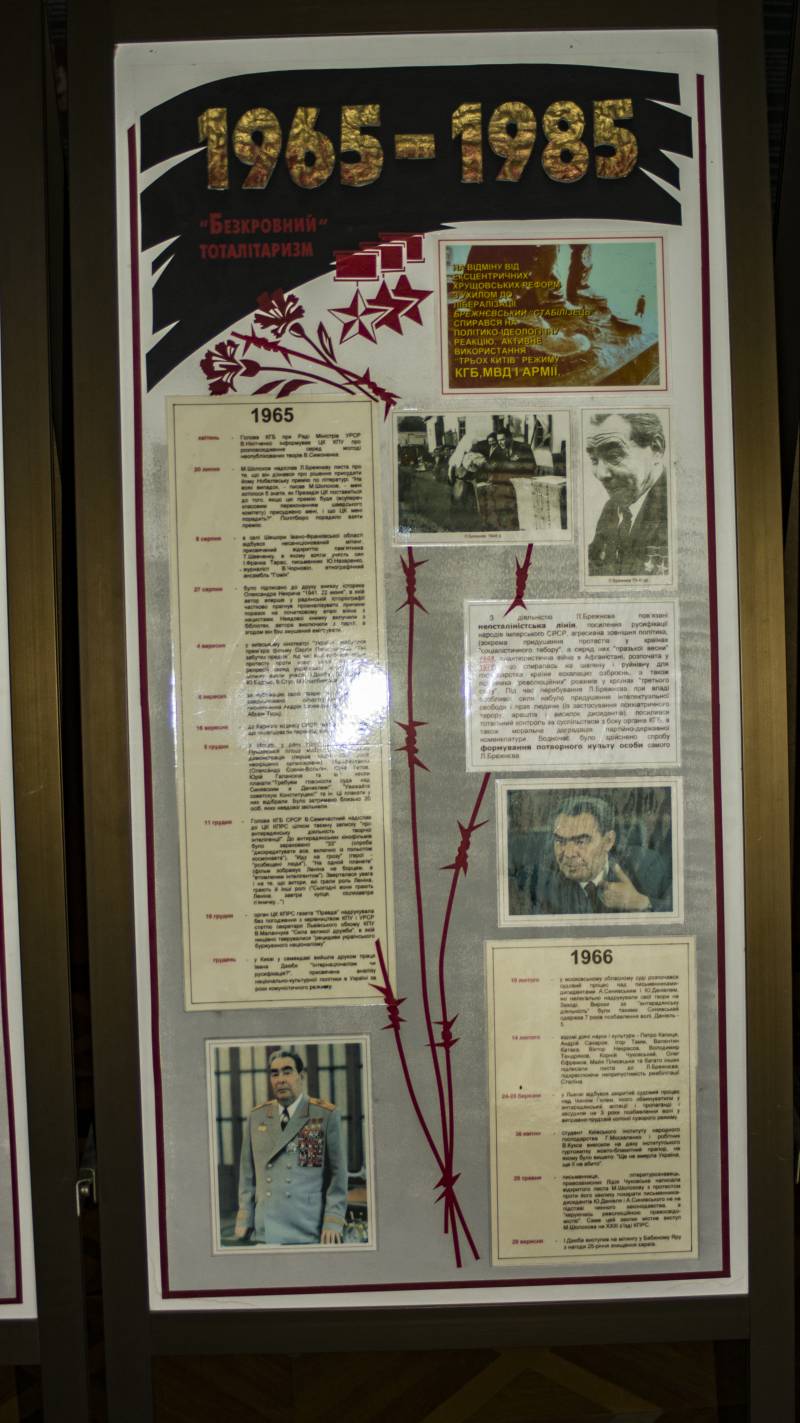 But in these years, the Chief Occupant, a native of the Yekaterinoslav / Dnepropetrovsk province, Brezhnev, spread rot to Ukraine ... He built enterprises of the space and military industry, which today, understandably, in defiance of the invaders, spoiled almost everything.

Actually, then everything is as memorial. For the same canvas, the same quack with resin. 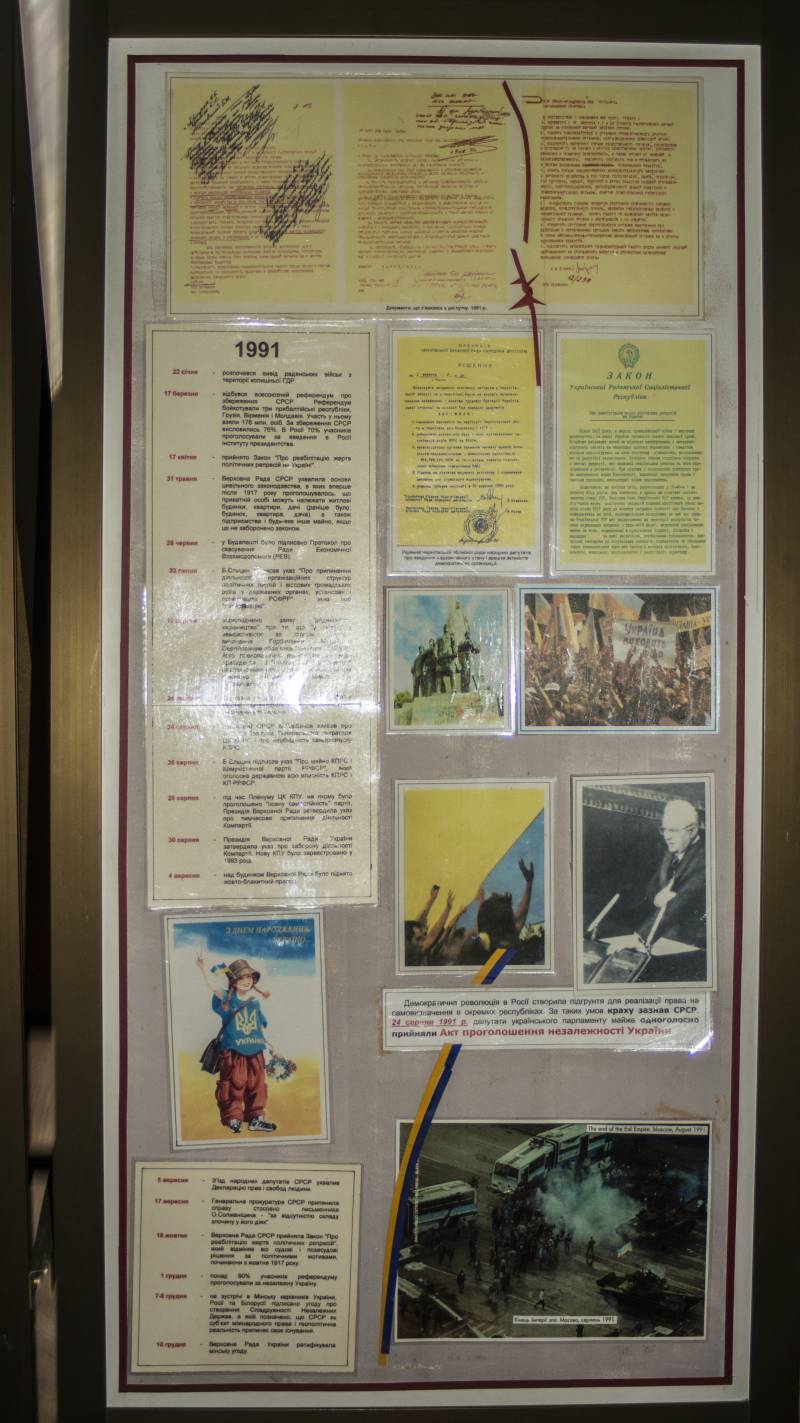 Ah, the wire is all! Now everything is fine, the occupation is over! Glory to Ukraine!!! 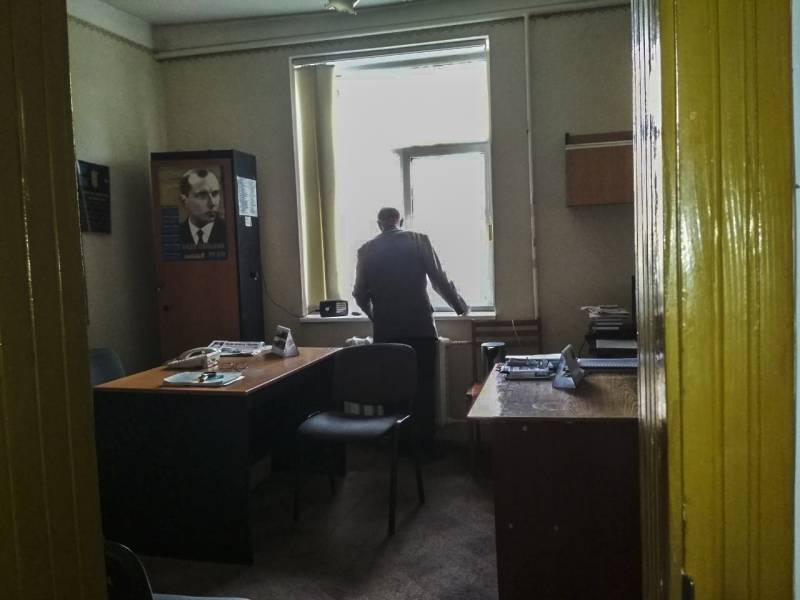 Glory to the director. Modestly and in thoughts about Ukraine.

I would like to finish the story about this unusual museum with the phrase of Viktor Stepanovich Chernomyrdin.

“Opening up a“ museum ”is an insult to Russian and Ukrainian peoples.” "In terms such as occupation, it is a shame to discuss this question. Why did you spit in the soul of the people?"

Well, for what, suppose, we now know. But how much this wedge is driven in tightly is a question. But the fact that this memorial of lies and fraud, we visit, is registered in all the guidebooks and reference books, says that for a long time.

Ctrl Enter
Noticed oshЫbku Highlight text and press. Ctrl + Enter
We are
Reports from the militia of New Russia for 27-28 September 2014 of the yearResults of the week. "Well, do not change me because of every idiot!"
Military Reviewin Yandex News
Military Reviewin Google News
89 comments
Information
Dear reader, to leave comments on the publication, you must sign in.