Geopolitical mosaic: in Dnepropetrovsk, 29 people were injured as a result of explosions, and Iran and the IAEA will hold talks on 13 in May

April 28 2012
75
As a result of the explosions in Dnepropetrovsk, 29 people were injured. Five of them are now in serious condition, one had to amputate the arm. Reports about it RIA News". The prosecutor's office of Dnipropetrovsk opened a case under the article "Terrorist Act." 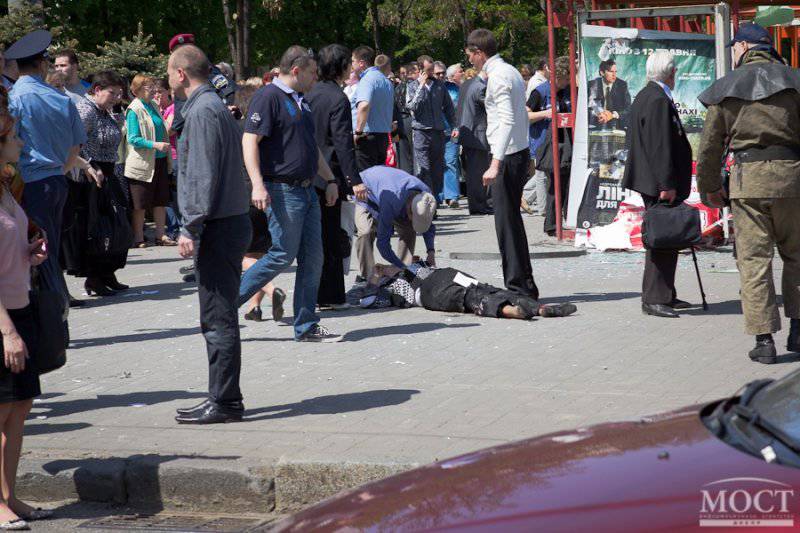 In different media, we are talking about four explosions, then six or even ten. There is still no information about the suspects; There are no detainees in the criminal case. Law enforcement agencies did not receive any demands or threats from anyone either. Quote:

"The Ministry of Internal Affairs of Ukraine did not confirm the RIA"News»Information spread in some media about the detention of the first suspects in the organization of explosions in the center of Dnepropetrovsk.

Earlier, the local agency Most-Dnepr, citing a source at the headquarters of the Ministry of Internal Affairs in the Dnipropetrovsk region, reported that the first arrests had been carried out. The agency writes that at the moment protocols are being drawn up on the fact of the incident in Dnepropetrovsk. The case is taken under the control of the Security Service of the Dnipropetrovsk region. "

The European Union plans to render assistance to Ukraine in connection with the explosions. The press service of Catherine Ashton issued a statement saying: “The European Union will maintain close contact with the Ukrainian authorities in order to receive new information about the causes of the explosions, the condition of the victims and what assistance can be provided to Ukraine” (RIA News").

Experts believe that Rogozin has been relieved of his post as special representative due to the increased amount of work on other posts.

13-14 May Iran will resume negotiations with the IAEA. They will be held in Vienna. Reports about it RIA News" with reference to France Press.

The representative of the Islamic Republic at the IAEA, Ali Asgara Soltaniye, said: “The next phase of negotiations between Iran and the agency will be held on 13 and 14 in May in Vienna. This decision once again demonstrates Iran’s desire to cooperate with the agency ... and shows that the activities of the Islamic Republic in the nuclear field are entirely peaceful. "

Fresh news from Washington on the Iranian topic:

“Washington is considering the possibility of allowing Iran to enrich uranium to 5% if Tehran lifts all restrictions on international inspections of its nuclear facilities and allows for permanent monitoring of their operation, the Los Angeles Times website reports with reference to unnamed representatives of the US administration.

The leadership of the United States and other countries has gradually come to the conclusion that the Iranian side is unlikely to comply with the requirements to completely stop the uranium enrichment process, and this will not allow reaching any agreement of the parties, the newspaper notes. Therefore, the possibility of a compromise is being considered.

A possible change in the US position on Iran’s nuclear issue is likely to cause serious opposition from the Republicans ”(RIA News").

It appears that the “serious opposition” of the Republicans will be expressed in the form of inevitable political criticism of the Obama administration (who does not want war with Iran) and in attempts to “play” another aggressive game, to which presidential candidate Mitt Romney is a big hunter.

Romney - virtually the only opponent of Barack Obama in the autumn elections in the United States, even if he is not an official candidate of the party. Interfax reports:

“In order to get official status, Romney needs to enlist the support of 1144 delegates. According to the Associated Press, which is referenced by most of the American media, Romney can now record votes on 844. CNN is somewhat more cautious in its assessments and gives only the 764 vote to the leader of the Republican race.

Although formally two more Republicans are participating in the presidential race - former Speaker of the US House of Representatives Newt Gingrich and Congressman from Texas Ron Paul, their chances of receiving the nomination for the "Great Old Party" are virtually zero. <…>

The ex-governor could be helped to achieve this result by his former main rival, the former senator from Pennsylvania Rick Santorum, who stopped fighting for the presidency in early April due to family difficulties. At this point, 273 delegates were ready to vote for Santorum, whose support for Romney would not hurt. In the near future, both Republican leaders should meet to discuss the fate of these votes. A meeting is scheduled for May 4. ”

In the US Secret Service is now enacted dry law. True, special services are forbidden to drink whiskey and tequila only abroad; at home, these brave guys can still indulge in pleasing the soul drunkenness. More secret agents will not be allowed to visit "doubtful" establishments abroad and bring foreigners to hotel rooms. This is reported "Vesti". It will not be possible for the Secret Service officers to drink alcohol in 10 hours before they start work.

Such a strict ban was caused by several scandals, first of all by the sensational scandal with twenty Kartagena prostitutes with whom the 12 secret agents in the community with the Marines 12 had fun, but forgot to pay. One of the Colombian prostitutes — and in Colombia, prostitution is a legitimate occupation — complained of defaulters to the police, and then ubiquitous journalists appeared. Now the Secret Service and the Pentagon are continuing to investigate those who have distinguished themselves by "inappropriate behavior."

Another sex-political scandal recently led to a loud accusation. This is reported "Vesti":

“The former managing director of the International Monetary Fund (IMF), Dominique Strauss-Kahn, is convinced that last year’s scandal over an attempt to rape them with a maid in the New York hotel Sofitel, which ended his political career, was arranged by the people of French President Nicolas Sarkozy.”

Strauss-Kahn said in an interview with the Guardian newspaper: “I planned to make an official statement on 15 on June [2011], and I have no doubt that I would become a candidate from the Socialist Party.”

The Guardian, Vesti reports, confirms Strauss-Kahn’s forecasts: public opinion polls showed that Strauss-Kahn’s popularity rating was at that time 20% higher than that of Sarkozy, and therefore the chances of a first person for a successful presidential campaign were high.

News from Mali. "Lenta.ru" writes: “The countries of West Africa will send at least 3000 troops to Mali to train and rearm an army under the control of an interim government. It is reported by the Associated Press with reference to the statement of the Deputy Minister of Defense of Côte d'Ivoire, Paul Koffi Koffi (Paul Koffi).

As explained by the head of the Commission of the Economic Community of West African States (ECOWAS), Desire Kadre Ouedraogo, quoted by Agence France-Presse, West African troops will help ensure the restoration of the territorial integrity of Mali. ”

In guinea bissau the military, who took power in the country on 12 on April, freed those arrested by them and about. President Raimundo Pereira and former Prime Minister Carlos Gomes Junior. Last night they arrived in Ivory Coast, reports RIA News" with reference to the agency France Press. Recall that the release of the former leaders of Guinea-Bissau had previously demanded ECOWAS.